Despite reports, public lends support to expanded exploration at Palmer 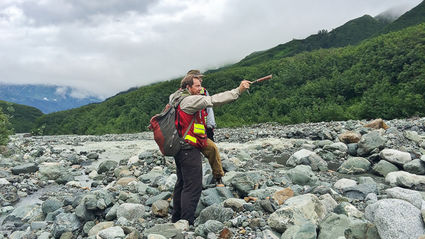 Constantine Metal Resources Vice President of Exploration Darwin Green and road builder Tim Droke scope out the area where a bridge will span Glacier Creek. From here a proposed exploration road will wind its way up Mount Morlan to the area of the copper- and zinc- rich deposit at Palmer.

Constantine Metal Resources Ltd.'s plan to expand exploration at its copper- and zinc-rich Palmer project near Haines has ruffled the feathers of some members of the Southeast Alaska community. A much larger group, however, are hailing this mineral explorer for its high ethical and environmental standards and commitments to the community.

"As a lifelong resident of Southeast Alaska, one who is committed to the future health of our environment and industries, I support this project," one individual wrote in favor of expanded exploration at the Palmer project. "Constantine has taken every possible measure to ensure that this development is done in a safe and responsible manner. This is a great opportunity for our community, and Constantine is committed to this type of sustainable development."

This is one of 173 comments the U.S. Bureau of Land Management received as part of a National Environmental Policy Act analysis of Constantine's plan of operations to expand exploration at Palmer.

This plan proposes up to 2.5 miles of road construction that would provide access to up to 40 new drill sites on the Southeast Alaska property and provide staging areas for helicopter and ground-supported exploration activities at the copper- and zinc-rich polymetallic deposit.

There is a vocal handful of Haines residents that have raised the specter that expanded development of Palmer threatens an annual gathering of some 3,000 bald eagles that feed on an abundance of post spawning salmon carcasses in the Chilkat River, about 18 miles away from the project.

"BLM should consider future impacts of this exploration and if we really want a large mine upstream from our world class pristine salmon rivers and the Chilkat Bald Eagle Preserve," one individual penned in opposition to the exploration and road outlined in the environmental assessment.

The state of Alaska established the 48,000-acre Chilkat Bald Eagle Preserve in 1982, part of a larger agreement meant to protect the critical habitat of these renowned raptors while designating areas, such as where Palmer is located, for development. At the time, this compromise was hailed as an example of how to protect habitat while allowing for development of Haines' rich timber and mineral resources.

Recent media reports putting a spotlight on concerns over potential impacts to this eagle preserve does not reflect the spirit of this agreement between conservationists, resource developers and the Haines community.

These articles also do not reflect the overwhelming support behind Constantine's expanded exploration plan.

In fact, for every comment opposed to Constantine's plan, BLM received seven in support of expanding the scope of the project.

"Constantine is a great addition to the Haines community, they have worked very hard to be responsible users of the public and private lands," one such person responded. "Please allow them the opportunity to continue to explore for additional mineral deposits."

Most mineral exploration permits in Alaska are not subject to a public comment review and comments before being decided upon by regulators. BLM, however, felt that Constantine's proposal for expanded exploration and access road at Palmer should be thoroughly vetted through the NEPA process, a level of evaluation akin to permitting a full-scale mine.

"It is our responsibility to ensure that operations we permit on public lands are safe and protective of natural resources and the local community," explained Dennis Teitzel, manager of BLM's Glennallen field office. "Protection of water quality and other resources, and protection of the local community and its economic development are goals the BLM shares with the public, tribes and industry."

This process culminated in a 214-page draft environmental assessment that provided details of a road, bridge, staging areas and other infrastructure designed to increase safety and efficiency during the next stage of exploration at Palmer.

During a 30-day comment period, BLM received 173 comments on the plans Constantine detailed in the assessment. Without divulging the names of the authors, BLM published excerpts from these comments. Out of 137 comments on the overall plan, 118 were in favor of the exploration plan, 16 were opposed and three were neutral.

"Constantine Metal Resources has been a great asset to our community. They want to develop a project that protects the surrounding environment while also providing jobs to Haines," wrote a resident who has been following development at Palmer for years. "I fully support their efforts."

It was not just Haines residents that backed Constantine with glowing endorsements.

"In both personal and professional capacities I have become well acquainted with the Palmer project and the individuals who represent Constantine Metal Resources in Haines, AK," penned one person representing a non-governmental organization. "I am assured that their mine plan of operations is sound and minimizes and avoids environmental impacts even as it improves project efficiency and worker safety.

"Indeed, their plan is one which will streamline the process of project evaluation simultaneous to positively impacting the socioeconomic landscape in Haines, AK –a community to which Constantine Metal Resources is highly committed," the same NGO representative added.

Much of this resource, which does not include the drilling carried out last year, has been added to this volcanogenic massive sulfide deposit since Dowa Metals & Mining Co. Ltd. joined as a funding partner at Palmer in 2013.

According to an agreement inked between Dowa and Constantine in February of that year, the Tokyo-based smelting and mining company can earn a 49 percent joint venture interest in Palmer by investing US$22 million in the project, which is expected to happen by the end of this year.

Exploration over the years has traced this deposit from near the top of Mount Morlan to about halfway down to the Glacier Creek valley below.

To continue tracing the deposit further downward, Constantine and Dowa are about ready to begin building the 2.5-mile road from the camp to the deposit.

This road largely follows a dozer trail established by prospector Merrill Palmer in 1977, including a section that winds its way up to about the lower end of the delineated deposit. While following the historical trail, the road proposed by Constantine is engineered to be safer and minimize the environmental footprint.

"The application thoroughly addresses their actions, the potential and real impacts of their proposal and the improvements to safety and reclamation of the 1970s-era trail that their route largely follows," one individual wrote in support of the road.

"The road follows a natural path through the valley and has been designed to avoid and minimize environmental impacts," an NGO added in its comments to BLM.

Thanks in large part to the overwhelming support of Haines residents, BLM approved Constantine's expanded exploration plan on Aug. 18. While this authorization comes a bit too late for Constantine and Dowa to complete the exploration infrastructure this year, the partners hope to complete the road up the Glacier Creek valley before winter sets in.

Next year, the partners will finish the road as it winds its way up Mount Morlan and continue to explore what they hope will turn out to be a deposit of the size and grades to support an economically viable mine.

Some opposition is concerned that the added infrastructure will ultimately be used to support a future mine at Palmer.

"I am worried that Constantine is moving step by step toward mine operation while in the exploration phase," one individual wrote.

Others hope it is.

"I support Constantine's continued efforts to explore and potentially develop a working mine, which would provide a sound working base for our community's economy," a resident penned in a request for expeditious approval of Constantine's request.

"They should be given the opportunity to continue in the long road to a producing mine," another individual wrote.

The outpouring of letters in support of expanded exploration and, in some cases, potential of development Palmer is the result of years of honest dialogue and involvement with the residents of Haines.

"Constantine has earned the respect and support of residents of Haines and Southeast Alaska, not only through the economic benefits it has created through new local employment and expenditures, but very importantly, by building trust by conducting business with high ethical, environmental, and professional standards," one person wrote in support of continued and expanded exploration.

"The company goes above and beyond in its commitment to 'a successful project, healthy ecosystem, and vibrant community,' and has proven a regional leader in public engagement," this individual continued. "It has worked diligently to take a very broad range of stakeholder interests into account, and design a Plan of Operations which minimizes adverse impacts, and creates overwhelmingly positive benefits for families and businesses in the region."