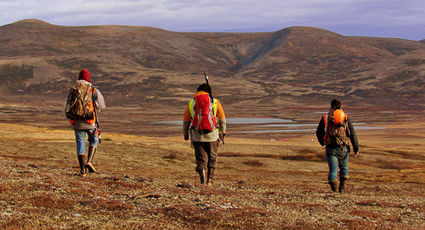 Workers hike back to camp after completing field work at the Pebble project in 2011.

The U.S. Environmental Protection Agency has set in motion plans to completely do away with the pre-permitting restrictions it attempted to impose against Pebble in 2014.

If fully implemented, these Obama-era Clean Water Act restrictions would have seriously reduced the size of any mine that could have developed at the world-class Pebble copper-gold-molybdenum deposit in the Bristol Bay region of Southwest Alaska.

A federal judge ordered a stay on the implementation of EPA's proposed determination to restrict Pebble permits before they could go into effect and earlier this year EPA agreed to allow the Pebble Limited Partnership to enter the permitting process unencumbered by the predetermined restrictions.

EPA's underlying CWA Section 404(c) determination, however, remained in place and posed potential complications if the U.S. Army Corps of Engineers decided to issue permits for Pebble. On July 10, EPA proposed doing away with its controversial and unprecedented CWA Section 404(c) determination altogether and initiated a 90-day public comment period that puts this proposal in motion.

While of vital importance to the Pebble Partnership, the lifting of EPA's CWA restrictions on permits to develop Pebble also eliminates a precedent that is viewed by many as a power play that had the potential to change the way the federal regulator assessed project development in the United States.

In 2015, Collier informed the U.S. House Science Committee the at least part of EPA's over-arching intent in pre-emptively stopping the Pebble Mine is to set a precedent that would allow the agency to decide where industrial development could and could not take place in the U.S.

"They want to be able to zone the watersheds of America," Collier summarized.

In 2010, while tossing around the idea of taking pre-emptive 404 (c) action against Pebble, upper level EPA management said that a successful pre-emptive veto of the Pebble permits would "serve as a model of proactive watershed planning" in the United States and listed this assertion in the pro column of a matrix evaluating the potential of taking a pro-active stance at Pebble.

The House Science Committee, which uncovered this document in its own 2014 investigation into EPA's effort to restrict Pebble prior to permitting, had already reached a similar conclusion.

In a February letter, the committee urged newly appointed EPA Administrator Scott Pruitt to overturn the potentially precedent setting determination that was based on "a questionable scientific assessment that relied on pre-determined conclusions."

"This simple action will allow a return to the long-established Clean Water Act permitting process and stop attempts by the EPA to improperly expand its authority," Science Committee Chairman Lamar Smith penned in the letter to Pruitt.

Removing extraneous restrictions that complicate the permitting major development projects in the U.S. fits well with a Trump administration that is focused on streamlining the permitting process in a way that reduces the timeframe while still maintaining the rigorous environmental standards in place.

"The current administration at EPA is closely focused on enforcing environmental standards and permitting requirements for major development projects like Pebble in a way that is both rigorous and robust, but also consistent in order to provide predictability and an even-playing field for all resource developers," said Collier. "It's an approach all Alaskans and all Americans should support, because it has the benefit of maintaining the high standards for environmental protection for which the state and country are known, while attracting investment in projects that create high-wage jobs and other much-needed economic benefits in our country."

Agreeing that it should completely withdraw its 2014 decision, EPA is now gathering input from stakeholders and consulting with Alaska Native governments in the Bristol Bay region where Pebble is located.

The EPA can expect to get strong opinions on both sides of the Pebble issue when it hears from residents of the Bristol Bay region.

"Bristol Bay leadership has been steadfast in their opposition to the Pebble Mine and have communicated repeatedly that the region will not back down," United Tribes of Bristol Bay Executive Director Alannah Hurley said in a statement shortly after the agency's July 11 announcement.

While this assertion represents UTBB and other steadfast anti-Pebble groups, it does not embody the opinions of everyone in the Bristol Bay Region.

Kimberly Williams, a Bristol Bay resident and one of the most recognized and outspoken critics of Pebble, says she has heard "heartfelt testimony" from local people worried about a mine in the region as well as residents whose lives have been changed by the economic opportunities the project has already brought to the region.

A mother that was able to get off welfare and support her young family because of the ability to work at Pebble; and a tribal leader that worries about what a mine near his village would mean for salmon runs but has also observed the many benefits that jobs at Pebble has already provided to his neighbors are a couple of the examples Williams shared in a June letter addressed to Pebble and the Bristol Bay Native Corp.

This letter announced her resignation from an advisory committee the Pebble Partnership formed to receive input from a broad range of perspectives, including those critical of building a large mine in the Bristol Bay region.

She, however, was forced to resign when BBNC threatened legal action to remove her from its board of directors if she remained on the Pebble advisory committee.

After hearing for itself the heartfelt testimony from Bristol Bay residents and collecting input form the public at large, EPA will makes it decision on whether to issue a final withdrawal of the 2014 determination.

The public comment period is slated to close in early October.

In the meantime, Northern Dynasty Ltd., currently the sole owner of the Pebble Partnership, will continue to advance toward the next major milestones – qualifying and securing a new major funding partner for the Pebble Project and filing for permits to develop a mine at the world-class Pebble project.

With roughly 56.8 billion pounds copper, 70.4 million ounces gold, 3.4 billion lb molybdenum and 343.6 million oz silver in measured and indicated resource, the Pebble deposit is an attractive asset in a world where new stores of copper and gold are getting harder to find.

"When it comes to undeveloped assets, Pebble is both the largest copper and largest gold resource in the world," Northern Dynasty President and CEO Ron Thiessen told Mining News in May. "This is the kind of long life asset that most major mining companies covet."

At the time, Thiessen said Northern Dynasty was in advanced talks with a number of mining companies and the new Pebble partner may be a consortium of three or four of them.

While Northern Dynasty secures a new partner, the Pebble Partnership is finalizing "a smaller, environmentally-optimized project design" for Pebble.

In 2011 Northern Dynasty published a preliminary economic assessment that considered a 220,000-metric-ton-per-day operation at Pebble that would produce 31 billion lb of copper, 30 million oz of gold, 1.4 billion lb of molybdenum, 140 million oz silver, 2.6 million lb of rhenium and 907,000 oz of palladium over a 45-year mine-life.

World-class in size, even this long-lived mine only accounts for about 32 percent of the mineral resource outlined so far at Pebble.

Despite the size, the project proposed for permitting will likely be a more modest version that focuses on areas of the deposit that come right to the surface. This will be less expensive to develop, produce less waste from the removal of overburden and have a small overall environmental footprint.

"We believe the project design we are preparing to advance into permitting, as well as the social and stakeholder programs and commitments we are building around our project, will address many of the priorities and concerns we have heard from stakeholders in Alaska," said Thiessen. "We have every confidence that a permitting process led by the Corps (U.S. Army Corps of Engineers) will be objective and science-based, and provide us an opportunity to demonstrate that Pebble is a project of merit that will provide very substantial benefits to the people and communities of Southwest Alaska, the state and nation as a whole."