Coeur to buy BC mine 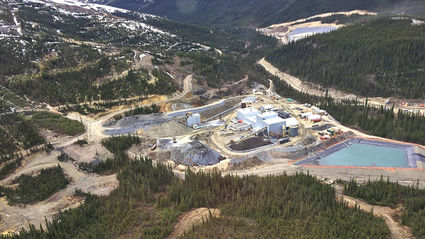 Coeur Mining Inc. has cut a deal to buy the high-grade Silvertip Mine in northern British Columbia, an acquisition that will add the first Canadian operation to the Chicago-based miner's portfolio of gold and silver mines.

JDS Silver Inc., a company formed by JDS Energy & Mining Inc. in 2012 to unlock the value of Silvertip, began operations at the high-grade northern B.C. mine late in 2016.

"JDS Silver identifies unique opportunities and deploys its proprietary value proposition to create projects that will generate value where others failed to see it," according to the company's website.

In the case of Silvertip, JDS applied its renowned engineering and permitting capacity to take a high-grade, near development silver project to production. With the operation up and running, JDS Silver has agreed to sell Silvertip mine to Coeur, a company that specializes in making the most of high-grade underground mines, for US$250 million.

"By assuming ownership of the Silvertip Mine at the beginning of its life, we think we really have an unique opportunity to apply our operational expertise and shape this mine into a highly profitable operation and an eventual cornerstone asset within our platform of mines," Coeur Mining President and CEO Mitchell Krebs said during a Sep. 11 conference call.

Coeur plans to have Silvertip running at its full 1,000-metric-ton-per-day capacity when it resumes year-round operations there in 2018.

Located on a road that extends 16 miles (26 kilometers) south from the Alaska Highway, Silvertip is an underground mine with more than 4,000 meters of underground development in place; and a 1,000-metric-ton-per day processing facility that is powered by five on-site liquefied natural gas generators.

The road accessible project also has a newly constructed dry stack tailings facility; 160-person camp; and a workforce already in place to fill the camp. At 1,166 g/t silver-equivalent – the cumulative value of the silver, zinc and lead in the resources – the value of the metals at Silvertip is on par with Hecla Mining's Greens Creek Mine in Southeast Alaska.

Coeur said these exceptionally high grades at Silvertip will significantly boost the company's silver-grade profile. For comparison, the high-grade gold reserves at Kensington are about 465 g/t when converted to silver-equivalency.

While only about 40 percent of the Silvertip grade, the reserves at Kensington are above average for an underground mining operation. Being a high-grade silver mine in northern B.C., Silvertip checked all the boxes for Coeur.

"It provides near term production and cash-flow from a high-grade, low-cost, high-margin asset located in a mining friendly jurisdiction," said Krebs.

Silver tip of the iceberg

Coeur has agreed to pay up to US$250 million to acquire this turnkey high-grade silver mine.

The deal includes US$200 million upfront, which involves paying JDS Silver approximately US$146.5 million in cash; issuing roughly 4.3 million Coeur shares valued at US$38.5 million; and assuming responsibility for about US$15 million in existing JDS Silver debt. The up to US$50 million balance is to be paid when two milestones are met.

The first such payment would be paid when Coeur receives a permit amendment that allows for year-round operations at Silvertip at the operation's full 1,000 t/d capacity The second milestone payment is contingent upon the size of the Silvertip minerals resource by the end of 2019.

Coeur believes the current resource may only be the silver tip of the iceberg and plans a robust exploration program aimed at upgrading and expanding the Silvertip resource as soon as it closes the acquisition.

"Based on our work so far, we believe the current Silvertip resource potentially represents the edge of a much larger system," Krebs said.

As part of its deal with JDS Silver, Coeur agreed to invest at least US$15 million on exploration by the end of 2019 but has indicated an even more robust drill program that initially focuses on expanding the resource in the immediate mining area and then work on expanding the high-grade silver deposit.

Once the deal closes, which is expected to happen before the end of October, Coeur does not plan to waste any time turning Silvertip into the highest grade silver mine in its portfolio.

"We plan to spend about US$25 million to US$35 million over the next six months or so to optimize and commission the processing facility; improve some the existing surface infrastructure; invest in underground development and drilling; and then to develop an optimized mine-plan," said Krebs.

The company hopes to have this work done and the amended permit in time to begin ramping up production at Silvertip fairly early in 2018. Once the mill is running at full capacity, Coeur expects Silvertip to produce roughly 3 million oz silver, 45-50 million lb zinc, and 40-45 million lb lead annually over an initial 7.5-year initial mine life.

"Once in full production, we expect Silvertip to produce about 10 million silver-equivalent-ounces annually, which would make it our second largest producing mine behind Palmarejo," the Coeur Mining CEO said.

Palmarejo in Mexico, which has about triple the mill capacity as Silvertip, produced 8.9 million silver-equivalent-oz in 2016 and is expected to produce more than 13 million oz this year.

The all-in costs to produce an ounce of silver at Silvertip are expected to be between US$10 and US$11. The ability to churn out high quantities of silver at lower costs in a secure mining jurisdiction is what made Silvertip a compelling acquisition for Coeur.

"With average annual sustaining capital of less than US$10 million, we expect Silvertip to be a source of significant long-term free cash flow," Krebs said.

"Over the past several years, we have repositioned our existing portfolio of mines, achieved greater geographic and operational balance and generated industry-leading cost reductions and cash flow growth," said Krebs. "The acquisition of Silvertip – one of the highest-grade and newest operations in the sector with a tremendous amount of exploration potential – should serve to further accelerate positive trends while providing us with an important foundation in British Columbia."