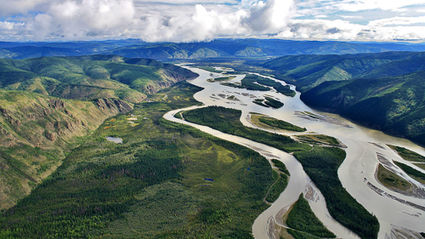 The Yukon River cuts through the White Gold District, a gold-rich region south of Dawson City that is drawing junior explorers and global miners alike.

As some of the world's biggest gold miners nab exciting plays that turned up across Yukon Territory during the past decade, Yukon's mining explorers continue to seek the next generation of mine projects in the northwestern-most Canadian territory.

Many of the up and coming mines in Yukon also are getting a boost from C$360 million in upgrades to roads into some of Yukon's richest mining districts.

Known as the Yukon Resource Gateway project, the endeavor to modernize transportation infrastructure in the territory includes improvements to four roads that penetrated the gold- and copper-rich Dawson Range of central Yukon and the Nahanni Range Road, which cuts through a zinc- and gold-rich area in eastern Yukon.

Canada Prime Minister Justin Trudeau rolled out plans to invest in modern transportation infrastructure during a visit to the territory on Sept. 2.

"Modern infrastructure is key to developing and properly managing the incredible natural resources we have at our fingertips," Trudeau said. "By providing easier access to important resources across Yukon, the Yukon Resource Gateway Project will help create good, middle-class jobs, promote long-term economic prosperity, and support a strong, sustainable North."

The prime minister pledged C$247.8 million to the Yukon Resource Gateway project, a program that will upgrade more than 650 kilometers (403 miles) of roads in the territory, and build or replace numerous bridges, culverts, and stream crossings in two minerals-rich regions of Yukon.

Following the development of project agreements with First Nations in regions of the proposed road upgrades, as well as the precursor environmental and socio-economic reviews, Yukon will contribute up to C$112.8 million to the road project.

"First Nation agreement is essential to the continuation of the project, and we look forward to working in partnership with them on this milestone development," Silver said.

The massive upgrade to mining roads in Yukon is fueling added excitement to the territory's mining sector, which has had no shortage of good news in 2017.

While Coffee already enjoys decent summer access via the Yukon River, Goldcorp plans to build about 37 kilometers (23 miles) of new road that would link the property to an existing road extended south from the Klondike Highway east of Dawson City.

"White Gold Corp. is fully committed and looks forward to continue working with the federal, territorial and First Nation governments as we advance our exciting portfolio of Yukon projects for the benefit of all Canadians," said Ryan.

The road to Coffee also will make it easier to explore and potentially develop some of the early stage properties in the White Gold District.

In fact, the proposed road would skirt the eastern border of Lucky Strike, a property that Goldstrike Resources Ltd. is putting more time into now that Newmont Gold Corp. is shouldering the load at its Plateau property to the north.

The results are comparable to those from trenches dug at Goldcorp's Coffee gold project, about 30 kilometers (19 miles) to the southeast and White Gold Corp.'s Golden Saddle deposit, roughly 15 kilometers (9 miles) to the west. Goldstrike hopes to tap a similar deposit at Monte Carlo.

Near the end of the pending road, Independence Gold Corp. is exploring the Boulevard gold project immediately west of Coffee.

"The Yukon is a great jurisdiction to invest and explore in and we are excited to continue our work at Boulevard and throughout the district," said Michael McPhie, interim chairman and CEO of Independence Gold.

In 2017, the company completed roughly 1,500 meters of diamond drilling to follow-up gold mineralization outlined with reverse circulation drilling at the Sunrise-Sunset zone over the previous two years. Highlights from the previous drilling include 6.1 meters of 4.36 g/t gold; and 39.6 meters of 1.58 g/t gold.

Arcus Development Group Inc. also tested a number of gold targets at Dan Man, a property on the northern border of the Coffee Gold property.

The Yukon Resource Gateway Project also will improve roads in the copper- and gold-rich areas along the south slopes of the Dawson Range.

This includes upgrades to the Casino Trail, which extends to Western Copper and Gold Corp.'s Casino project, which hosts 4.5 billion pounds of copper and 8.9 million oz of gold in 1.1 billion metric tons of proven and probable reserves.

The Resource Gateway project includes funding to upgrade 82 kilometers (51 miles) of existing roads towards Casino and about 30 percent of the funding needed to establish another 126 kilometers (78 miles) of road to the large copper-gold project.

"Construction of this road will provide jobs and business opportunities to the communities and First Nations in the short term, and will provide much needed infrastructure to the Casino project that will provide significant benefit to these communities, First Nations, and the Yukon in general for the long term," said Western Copper President and CEO Paul West-Sells.

Once in production, Casino is expected to employ some 600 workers and, a 2013 report indicates that a the mine would contribute C$9.6 billion to the Canadian economy, and pay C$3.2 billion in taxes and royalties to federal, territorial, and First Nation governments over its initial 22-year mine-life.

The Casino project is currently in permitting.

"This funding is a significant commitment from both the territorial and federal governments and reaffirms our belief that Yukon is one of the best jurisdictions in Canada for mining exploration," said Triumph Gold President and CEO Paul Reynolds.

In southwestern Yukon, Rockhaven Resources Ltd. completed roughly 16,000 meters of drilling aimed at areas that could expand and upgrade resources considered in a 2016 preliminary economic assessment for its Klaza gold-silver project.

This work was backed by financial and technical support from Coeur Mining Inc., a mid-tier precious metals producer that owns the Kensington gold mine located about 225 miles south of Klaza in Southeast Alaska.

"Enhancing the economics at Klaza is largely dependent on adding ounces amenable to open pit mining, and these first holes help demonstrate the consistent nature and extent of the near-surface gold mineralization within and adjacent to the Klaza and BRX zones," said Rockhaven President and CEO Matt Turner.

Initial results from the 2017 program indicate the company is achieving this objective, including one hole that cut 182 g/t gold and 0.61 g/t silver over 0.61 meters, the highest grade intercept at Klaza, so far.

In addition to expanding the resource zones, drills also tested other promising targets near the deposit.

Coeur's technical team is expected to carry out metallurgical and pre-concentration testing to optimize the project considered in the PEA.

An updated preliminary economic assessment prepared for the Wellgreen project in 2017 outlines plans for a 25,000-metric-tons-per-day initial operation for the first five years and then scale up to a 50,000/tpd operation for another 20 years.

This growing repute is thanks to Golden Predator Mining Corp. and the numerous zones of high-grade gold it is discovering and expanding at the 3 Aces property.

"This milestone project, with improved access to our 3 Aces project and other projects, literally unlocks the wealth of the Yukon for the benefit of First Nation and rural Yukon communities as well as Yukon and Canada," said Golden Predator CEO Janet Lee-Sheriff.

Golden Predator completed some 40,000 meters of drilling that expanded the high-grade gold zones in the core area of its 357-square-kilometer (138 square miles) 3 Aces gold property.

The main objective of this drilling is to expand upon the 396,468 gold-equivalent oz contained in an inferred resource at the Highland Main Zone that averages 0.99 g/t gold-equivalent.

While this far-eastern section of Yukon has its fair share of gold, the Selwyn Basin in this region is better known for its zinc potential.

About 100 kilometers (60 miles) northwest of 3 Aces, Selwyn Chihong Mining Ltd., has slowed it plans for developing a world-class zinc mine at its Selwyn project near the terminus of the Nahanni Range Road.

The China-based company was previously targeting 2021 for the start of production, but postponed its plans in 2016 and there has been little news from the company since.

Fireweed Zinc Ltd., a new exploration company, is focused on advancing the Jason and Tom zinc-lead-silver deposits at its Macmillan Pass property about 100 kilometers (60 miles) northwest of the Selwyn project.

Macmillan Pass boasts a camp, airstrip and access from the North Canol Road, which allowed Fireweed to begin exploration immediately upon completion of a C$4 million initial public offering in May. The initial phase of this work included roughly 2,000 meters of drilling aimed at upgrading the historical resources to modern standards.

The information gathered form this work will be used to update the resource for Jason and Tom, expected by the end of 2017, and a preliminary economic assessment on the Macmillan Pass project early in 2018.

With two mines gearing up for production, the historic mining region near Keno City is set to revisit its legacy.

Alexco Resource Corp., which holds rights to mineral claims and leases that cover nearly the entire historic Keno Hill Silver District of central Yukon, is gearing up to resume operations on the historic property.

The company began commercial production at Keno Hill early in 2011 but suspended operations in 2013 due to weak silver prices.

In March, the company published a preliminary economic assessment that outlines an operation at the re-opened Keno Hill Mine that would produce 25.1 million oz of silver, 77.3 million lbs. of zinc, 67 million lbs. of lead and 4,870 oz of gold over eight years.

This year, Alexco is investing some C$11.9 million in exploration and development work ahead of a decision on resuming production at Keno Hill.

"Alexco is fully engaged on site operations and a plan to move steadily forward in preparation for a final production decision at Keno Hill," said Alexco Chairman and CEO Clynt Nauman.

About 30 kilometers (19 miles) northwest of Keno, Victoria Gold Corp. has begun development of a mine at the Eagle Gold deposit on its Dublin Gulch property.

The open-pit, heap-leach operation at Eagle Gold is expected to produce 190,000 ounces of gold annually over a 10-year mine life from 116 million metric tons of reserves averaging 0.67 grams per metric ton (2.66 million oz) gold outlined prior to a 2016 updated feasibility study for the project. These reserves would be mined from Eagle Gold, the original deposit, and Olive, the primary target of exploration over the previous two years.

In August, Victoria broke ground on a C$40 million phase-1 construction program at the Eagle Gold Mine site. 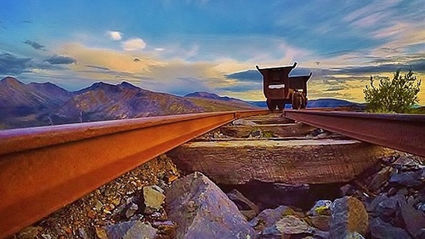 An ore car rests outside an historic mine adit at Alexco's Keno Hill Silver project in the Yukon.

This is an exciting milestone in the ongoing development of the Eagle Gold project," said Victoria Gold President and CEO John McConnell.

As development crews begin building the pending mine, Victoria's exploration team is finding new deposits of gold across the 555-square-kilometer (214 square miles) property.

"This season's Dublin Gulch exploration program was designed to test several high-priority targets for gold potential, and thus far, over 30 kilometers (19 miles) of strike length of the Potato Hills Trend has been successfully worked, from Nugget in the east to VBW in the west," said McConnell.

With new mines being built and exploration turning up the next generation of projects, the Yukon seems set for an exciting new chapter of its golden mining legacy.