Mining Explorers 2017: A year of discovery for Auryn

With major investment by Goldcorp, explorer seeks new gold in Nunavut, BC 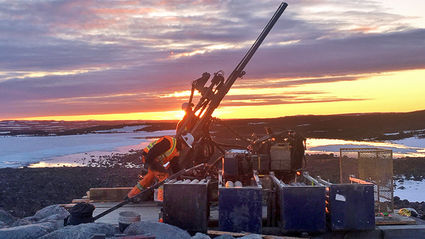 A C$41 million cash infusion early in 2017 ensured Auryn Resources Inc. had the funding to carry out the major exploration programs it had envisioned for its gold properties in Nunavut, British Columbia and Peru.

By April, the company was mobilizing north to complete a 33,133-meter exploration drill program at Committee Bay, an enormous land package blanketing a gold-rich greenstone belt in Nunavut.

Auryn's exploration, however, has focused on uncovering the district-scale potential of the enormous land package.

The company's forward thinking is what allows it to quickly and efficiently test this may targets over such a broad expanse of the Arctic.

"Auryn's innovative approach, with the use of track mounted rotary air blast drill rigs and drone survey's has reduced exploration costs significantly and allowed us to actively explore on the project 12 months of the year," said Auryn Chief Geologist and COO Michael Henrichsen.

To help with targeting the discovery drilling, the 2017 program also included magnetic surveys to further define structures; the collection of 19,000 till samples analyzed by portable x-ray fluorescence, or XRF; and boulder mapping to define source areas of gold-in-till anomalies.

"The quality and scale of the targets our technical team has developed over the last eight months has demonstrated the potential of the belt to deliver multiple discoveries," Henrichsen added.

The company started its 2017 drilling at West Plains, a familiar target at the southwest end of the property.

This drilling showed that gold mineralization at West Plains extends 150 meters below the surface.

The pinnacle of the 2017 program, however, may have been the high-grade gold discovered while drilling Aiviq, a prospect 7.5 miles (12 kilometers) north of Three Bluffs.

The mineralization encountered at Aiviq is situated along a regional shear zone that is defined by a 7,000 meter long gold-in-till anomaly.

"We view this high-grade intercept as the first step to defining a significant new discovery at Committee Bay and are looking forward to aggressively exploring the 7-kilometer (4.3 miles) long gold-in-tills anomaly along the mineralized shear zone in 2018," said Henrichsen.

Given that it is only a few miles from Three Bluffs, a definition drill program at Aiviq will benefit from being so close to the established deposit and the very well established camp there.

If the Aiviq discovery turns into the deposit that Auryn thinks it has the potential to be, its locale could also create a single processing facility could service two high-grade gold deposits.

"It is probably the best located place we could have found a potential deposit on our belt, as it is 12 kilometers (7.5 miles) north of Three Bluffs," said Auryn Executive Chairman Ivan Bebek.

While making exciting discoveries at Committee Bay, Auryn is preparing to drill Gibsons MacQuoid, a 329,000-hectare (813,000 acres) blankets another large greenstone belt about 170 miles (275 kilometers) to the south.

Auryn picked up this property between Agnico Eagle's Meadowbank Mine and Meliadine Mine project in February.

"With the acquisition of 120 kilometers (75 miles) of strike length located within the highly prospective Gibsons MacQuoid greenstone belt, Auryn has created another substantial gold exploration opportunity within the eastern Arctic," said Wallace.

Though previous sampling has turned up intriguing gold values at Gibsons MacQuoid, systematic exploration has never been carried out across this greenstone belt. Auryn began remedying this deficit with the same methodology that has proven effective at Committee Bay.

The 2017 program included the collection of 2,987 regional till samples, rock sampling and high-resolution drone imagery across the 120-kilometer- (75 miles) long greenstone belt.

The company said this reconnaissance sampling, prospecting and mapping has generated targets for a drill program planned for Gibsons MacQuoid in 2018.

"This is an incredible project in the Golden Triangle," said Bebek

"We think this has a shot to get much, much bigger," he added.

While the results from the drilling were pending at the time of this report, Auryn is excited about the mineralization it is seeing in the core from step-out drilling all around South Reef.

"We are very excited about these holes, so we are losing a lot of sleep as they (assays) are due to start coming back," said Bebek.

The Auryn chairman added that step out drilling is targeting the expansion of Homestake main zone to the north.

In addition to drilling, Auryn is completing metallurgical work aimed at improving the gold and silver recoveries from the high-grade zones at Homestake Ridge.

A preliminary economic assessment for this high-grade precious metals project just south of Stewart is slated for 2018.