First Quantum enters $1.5B deal for half of Pebble; permitting begins 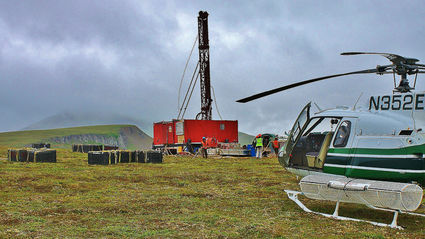 In a framework agreement announced on Dec. 18, First Quantum Minerals Ltd. was revealed as the major mining company that will complete the Pebble Limited Partnership.

"We have made good progress in the partnering process and are very pleased to be in advanced-stage discussions with First Quantum, an industry leader in mine development and management," Ron Thiessen, president and CEO, Northern Dynasty Minerals Ltd., currently the sole owner of the Pebble Partnership.

While the final details of an agreement that will provide First Quantum the option to own half of the Pebble Partnership are being hammered out, the US$1.5 billion preliminary agreement announced on Monday includes a US$150 million investment by First Quantum the will involve four equal payments of US$37.5 million to fund the upcoming permitting process for Pebble.

As long as the option remains in good standing, the global miner has the right to acquire 50 percent interest in the world-class Pebble copper-gold mine project by investing another US$1.35 billion into the partnership at the end of the four-year option period.

This tentative option agreement laid the foundation for the Pebble Partnership to advance Pebble into the long-awaited permitting process on Dec. 22.

While none of the company's operations are in North America, First Quantum has been eying Alaska's copper and gold potential for a few years now.

First Quantum's early interest in Alaska came as part of its 2013 buy-out of copper rival, Inmet Mining Corp., a company that had an exploration agreement with Millrock Resources Inc. on some Alaska properties.

Instead of dropping the very early staged Alaska exploration programs initiated by Inmet, which often happens to such projects following a takeover, First Quantum expanded its partnership with Millrock to include reconnaissance copper and gold exploration on a 1.6-million-acre tract of mineral land owned by Bristol Bay Native Corp.

While neither of First Quantum's early staged Alaska copper-gold exploration projects panned out, they established a foothold in the state that eventually led the company to cut a deal on Pebble – a permit-ready exploration project that hosts roughly 56.8 billion pounds copper, 70.4 million ounces gold, 3.4 billion lb molybdenum and 343.6 million oz silver in the measured and indicated resource categories.

Considered both the largest undeveloped copper and undeveloped gold resource on the planet, Pebble provides First Quantum with a project that potentially could provide the company the ability to supply these metals, along with the healthy portions of molybdenum and silver, for more than a century.

"This is indeed an investment in the long-term future of our company and it is sustainable growth through the next decade," said First Quantum President and CEO Philip Pascall.

In addition to robust exploration, the more than US$762 million invested in Pebble over the past 16 years has collected all of the environmental, engineering and other studies needed to prepare the mine project for permitting.

"We consider the option on Pebble effective as an extension of our exploration program but given the geological work done it already, it requires no further geological search," Pascall added.

The agreement with First Quantum opens the door for a long-awaited and major milestone for the Pebble Partnership – submitting the applications that kick off the permitting process for developing a mine at Pebble.

Pebble Partnership CEO Collier challenged his technical team to come up with an economically viable mine with a footprint of around 4.7 square miles, which is the size the U.S. Environmental Protection Agency said would be acceptable under its proposed restrictions on Pebble.

"My target was to get us in the ballpark of what the Obama Administration EPA said is something that could be built in the Bristol Bay Watershed," the Pebble Partnership CEO told Mining News. "I figure that if your strongest critics say your project could be environmentally sound then you are in the right place."

With a footprint of 5.9 square miles, which is smaller than the Ted Stevens International Airport in Anchorage, the project the Pebble Partnership is taking into permitting lands in the ballpark.

Collier said that the Pebble Partnership team is proud of the work it has done to balance economics and environment.

"We have put forward a project that is financially sound but is very reasonable," he said.

Pascall said First Quantum believes the project being submitted to the U.S. Army Corps of Engineers, the lead agency for the Pebble permitting process under the National Environmental Policy Act, will show that a mine at Pebble can be developed in an environmentally sound manner. 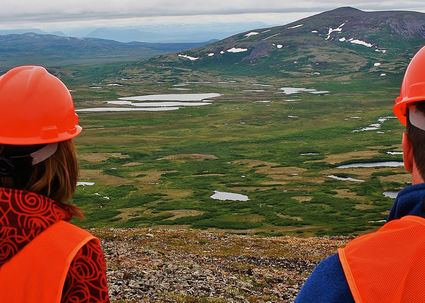 The world's largest undeveloped deposit of copper and gold lies under this treeless landscape in Southwest Alaska.

"It is our belief that the Army Corp's findings will provide an important, objective and scientific validation that Pebble can be developed to meet the rigorous environmental standards enforced in the United States and Alaska," he said.

The First Quantum CEO, however, said his company is not taking lightly the high standards this project will need to meet to convince Bristol Bay residents and fisherman, as well as Alaskans at large, that Pebble can be safely developed.

"I am not underestimating the effort required to make sure that any permits received from federal and state regulatory agencies are defensible, and will give comfort to communities and industry," he said. "However, I believe this project can be developed and operate safely; can co-exist with the important fisheries resources; and will make a positive contribution to the region and the state."