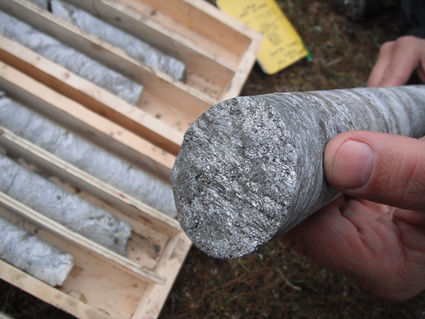 Core from drilling through the thick layers of high-grade graphite at the Graphite Creek project in western Alaska.

Graphite One Resources Inc. Dec. 21 said a U.S. Geological Survey report on critical minerals of the United States and an executive order to develop a federal critical mineral's strategy highlights the importance of the company's Graphite Creek project in western Alaska.

The USGS report lists graphite among the 23 metals and minerals critical to "the national economy and national security of the United States." Additionally, Graphite is one of just four critical minerals on the list for which the U.S. is fully import-reliant.

"The report and President Trump's executive order track with the ongoing discussions our team has been having with key U.S. officials at the federal level and the state of Alaska, with interest far more intense now than our initial discussions five years ago," said Graphite One CEO Anthony Huston.

One of the reasons the USGS considers graphite a critical mineral is the growing demand of this mineral as anode material in the lithium-ion batteries that power electric vehicles and a rapidly expanding number of personal electronic devises.

Located about 35 miles north of Nome, Graphite Creek is the largest known deposit of graphite in North America.

The unique characteristics of the material at Graphite Creek makes it well suited for being transformed into coated spherical graphite, which is used as an anode material in the batteries of electric autos.

A preliminary economic assessment completed early in 2017 outlined plans for a mine at Graphite Creek and an off-site facility to refine the graphite that would produce 41,850 metric tons of coated spherical graphite and 13,500 metric tons of purified graphite powders annually.

"As a major graphite developer in the U.S., Graphite One is seeing a growing awareness that graphite is critical to a full range of new applications - from electric vehicle batteries and energy storage systems to defense weapons platforms," said Houston. "The USGS report makes it clear that 100 percent import dependence on graphite and other materials pose risks to the U.S. economy and national security."

Editor's note: The preliminary economic assessment for the Graphite One project was completed early in 2017, this article has been updated to reflect the correct date.