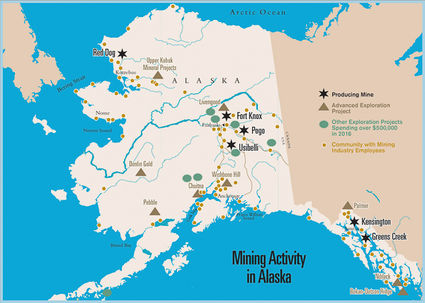 With rising metals prices helping to bolster the state's mining sector, Alaska mine leaders had good news to deliver to Alaska Senate and House resource committees during a Feb. 13 trip to Juneau.

"I am happy to report that after four years of declining metals prices things started to improve in 2016, so we are able to report better economic numbers for 2017," Council of Alaska Producers Executive Director Karen Matthias informed members of the resource committees.

The strong metals markets more than made up for slightly lower output from Alaska mines in 2017. As a result, the value of non-fuel minerals produced in Alaska during 2017 was roughly US$3.53 billion, a roughly 14 percent increase over the US$3.09 billion in 2016, according to the United States Geological Survey's annual report, "Mineral Commodity Summaries 2018".

This makes Alaska the fourth largest non-fuel mineral producing state in the U.S. – following Nevada at US$8.68 billion; Arizona at US$6.61 billion; and Texas at US$5.22 billion.

For Alaska, this means more taxes flowing into state coffers, income for local governments across the state and thousands of outstanding jobs for Alaskans.

"These are really good jobs – most are year-round jobs and they pay an average salary of US$108,000 per year," said Matthias.

Alaska's mining sector provided more than 4,400 jobs in mines across the state during 2017. At an average wage of US$108,000 per year, this means $475 million in wages were paid by the sector last year.

When you add in the roughly 4,600 indirect jobs – contractors and other support services – this mining sector supported payroll swells to roughly US$700 million during 2017.

"Gold is where you find it," is an adage oft cited by prospectors and miners of the precious metal. This same axiom can be applied to all minerals being mined and explored for in Alaska and is a key to geographical diversity of the jobs and other economic benefits flowing from the state's mining sector.

Today, Alaska hosts six large-scale mines, hundreds of family-sized placer gold operations and more than 20 active mineral exploration projects. With the exception of the oil-rich North Slope, these mines and projects are found in every region of the state.

The geological diversity of Alaska's mining projects, coupled with outstanding local hire programs at many of them, means that many of these high-paying jobs go to remote parts of Alaska where other economic opportunities are limited.

"Donlin Gold, when they were in their exploration phase, had over 90 percent local hire; the Upper Kobuk Mineral Projects is at 59 percent – those are really strong numbers for local hire," Matthias said.

Both projects cited by the CAP executive director provide these high-paying jobs in very remote parts of Alaska – Donlin Gold is in the Yukon-Kuskokwim region of western Alaska and the Upper Kobuk Mineral Projects are found in the Ambler Mining District of Northwest Alaska.

The geographical diversity of Alaska mines, current and future, is also good news for local governments across the state.

Alaska Miners Association Executive Director Deantha Crockett said Alaska's mining sector hopes to work with Alaska and its lawmakers to ensure the good paying jobs and other benefits mining brings to Alaska and its communities continues well into the future.

"We stand ready to work with you all and the state of Alaska to attract mining investment to our state – many Alaska communities and thousands of Alaska miners depend on it," she said.

Liz Cravalho, vice president of external and government affairs, NANA Regional Corp., said Red Dog is a prime example of the benefits mining can bring to the local governments, businesses and residents of rural Alaska.

"The mine was an opportunity to responsibly develop resources in this area of the state and provide economic development to the communities," she said. "The mine continues to have a significant impact on the NANA region."

For NANA, the economic benefits begin with its ownership of the lands that host the Red Dog deposit and mine facilities.

"Red Dog is the largest lead and zinc mine in the world, and NANA is the owner of the orebody," the NANA spokeswoman said.

"The United States is the fifth largest producer of zinc in the world – Red Dog accounts for over 70 percent of this zinc," she added.

As a result of this ownership of the largest zinc producing orebody on the planet, NANA receives healthy royalty payments on the net proceeds from the metals produced at Red Dog.

In October of last year, these royalties increased to 35 percent and are set to increase by 5 percent every five years up to a maximum of 50 percent of the net proceeds.

So far, NANA has received roughly US$1.3 billion in net proceeds payments. Of this substantial flow of cash from Red Dog, the Northwest Alaska Native corporation has distributed more than US$820 million to other regions of Alaska and at-large shareholder via the 7(i) sharing provisions of the Alaska Native Claims Settlement Act.

The 7(i) provision of ANCSA requires the original 12 Alaska Native regional corporations to share 70 percent of their revenue from resource development on their ANCSA-conveyed lands with the other regions.

"That means we have a significant impact on the rest of the state and the other Alaska Native communities," Cravalho said.

Of the US$480 million NANA has retained, roughly US$221 million has been paid in dividends to shareholders primarily from the net proceeds from Red Dog.

Red Dog also is the primary "taxpayer" in the Northwest Arctic Borough, a 24.3-million-acre expanse of Northwest Alaska that mirrors the NANA region.

The Red Dog Mine technically does not pay a tax to the Northwest Arctic Borough. Instead, the world-leading zinc producer pays the borough a payment in lieu of taxes. (PILT).

Under the terms of 10-year PILT agreement renewed last year, Red Dog flows roughly US$18 million to US$23 million directly to the Northwest Arctic Borough each year.

The agreement also includes the establishment of a new village improvement fund. Administered by the borough, with input from the 11 villages of the NANA region, this fund incudes US$4 million to US$8 million in annual payments that are earmarked for community programs, services and infrastructure.

So far, Red Dog has paid roughly US$155.6 million in PILT payments to the borough.

In addition to the money flowed to the borough and Alaska Native corporations, more than 300 NANA shareholders work at Red Dog. Not including benefits, the shareholders living in the region and beyond bring home roughly US$31 million in wages each year.

Mike Satre, government and community relations manager, Greens Creek Mining, said that in his view working with Alaska Native corporation like NANA is the best bet for mining companies looking to explore for and develop mines in the Far North state.

"Right now, if I have an investment dollar, I am finding an opportunity on Native corporation land and I am going to work with them to bring it to fruition," he told the lawmakers.

On the other hand, Satre expressed his displeasure with Alaska's uneven stance on developing the vast and rich minerals resources on state lands.

"While we have a lot of state land that is selected for mineral use, some projects are favored by the state and some aren't," he said. "Until the state takes a consistent approach to mineral resources on state land, state land will be the last place people look to invest their dollars."

The Red Dog Mine in Northwest Alaska accounts for roughly 73 percent of the zinc produced in the United States.

While Satre did not elaborate on which projects, Alaska Gov. Bill Walker has publicly stated that he does not currently support Pebble, a world-class copper-gold-molybdenum mine project on state lands that could, if developed, be a significant contributor to Alaska's economy.

Satre said developing mines on federal lands in Alaska is seen in a better light under the Trump Administration, but there is still work that needs to be done before the mining sector is comfortable working with federal land managers.

Citing NANA's success at Red Dog and the partnerships it has formed with Trilogy Metals in the Ambler Mining District, along with Native corporation partnerships at the Donlin Gold project, Satre reiterated that ANCSA land provides the best prospects for strong mining company-land owner partnerships in Alaska.

"ANCSA has a great history ... that is where the best opportunities may be and I look to see great successes there in the future, he said.