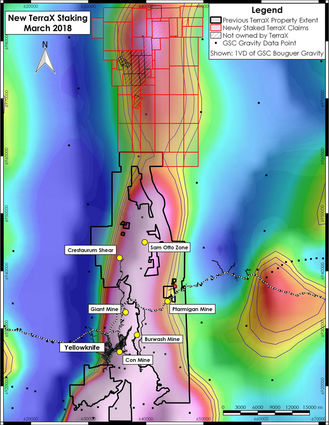 TerraX Minerals Inc. March 7 announced yet another expansion of its Yellowknife City Gold project, bringing its total land holdings near the Northwest Territories capital to 771.6 square kilometers, or roughly 190,665 acres.

The latest expansion of the Yellowknife project comes from the staking of 337.5 square kilometers (130.3 square miles) immediately north of its current properties. These additional 47 claims were staked based on extensive field exploration completed last year.

TerraX said that with the addition of the new claims, its property now blankets 70 kilometers (43 miles) of the same prospective geological trend that hosts the historic Con and Giant mines, which produced a combined 14.2 million ounces of gold.

"I believe this is a land position unmatched in gold potential by any other junior mining company in Canada," said TerraX CEO Joseph Campbell. "Our 2017 exploration and our compilation of regional geological data from the Slave Geological Province confirms that the deep crustal structure (the Main Break) for the Yellowknife gold camp extends north from our Northbelt claims. The consolidation of the most prospective 70 kilometers of gold bearing strike length on this belt reinforces TerraX's dominant control of this major gold district. TerraX will continue to comprehensively explore this entire land package in the coming campaigns."

The company is currently carrying out a 6,000-meter winter drill program at the Northbelt property, which lies immediately to the south of the newly staked claims.