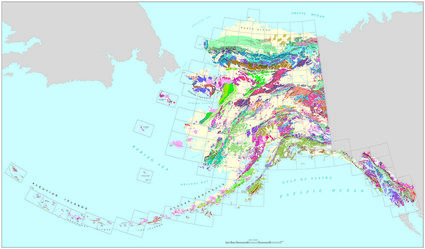 This map shows the generalized geology of Alaska, each color representing a different type or age of rock. Much more work is needed to provide the details to fully evaluate the state's mineral potential.

One of the most common complaints I hear from companies and individuals working in the mineral industry in Alaska is our deplorable lack of modern, usable-scale digital geophysical and geologic maps. How bad is it? Consider this: the U.S. Geological Survey has estimated that less than 2 percent of Alaska has acceptable geophysical data coverage, and less than 20 percent has been geologically mapped at a scale useful to evaluate the state's mineral resources.

Nobody will deny that Alaska is a mineral-rich state, however development of those mineral resources has always been hampered by the lack of public-sector geological, geophysical and mineral resource data. But that may be about to change.

On Dec. 20, 2017, President Trump issued Executive Order 13817, initiating a government-wide effort to address the critical mineral needs of the United States. Part of the strategy outlined was to improve the quantity and quality of geological and geophysical mapping across the nation. A day later, the Secretary of the Interior issued Secretarial Order 3359, which called for the U.S. Geological Survey to define a list of critical minerals, and develop a plan to "improve the topographic, geologic and geophysical maps of the United States, and make the resulting data and metadata publically available."

Because of its widely recognized and richly deserved reputation for metallic mineral deposits and prospects, Alaska looms large as a potential source of critical minerals and stands to benefit from any funding appropriated to this multi-year initiative, referred to as Three-Dimensional Mapping and Economic Empowerment Program (3DEEP).

The Alaska Division of Geological and Geophysical Surveys (DGGS) will play a significant role in these investigations in Alaska, but only if 3DEEP is funded at the national level. Funding for the 3DEEP initiative is being debated in Washington as we speak. Our congressional delegation needs to hear from the mining industry that we support the 3DEEP initiative.

Teck Resources Limited and partner NANA Regional Corp. announced first quarter 2017 results from its Red Dog mine. Mill throughput in the quarter was lower than a year ago but production was similar due to higher grades and recoveries in the current year. Zinc production was 121,500 tonnes (metric tons) compared to 120,500 tonnes a year ago. Lead production declined significantly, from 28,900 to 19,700 tonnes, due largely the lower ore grades and recoveries. During the first quarter, the mine produced 121,500 tonnes of zinc in concentrate from ore averaging 16 percent with mill recoveries up at 83.2 percent. The mine also produced 19,700 tonnes of lead in concentrate during the first three months of 2018 from ore grading 4.4 percent with mill recoveries decreasing to 49.1 percent. Gross operating profit for the quarter was $181 million, compared with $121 million in 2017. During the quarter, the mine paid partner NANA and the state of Alaska royalties of $74 million versus royalties of $49 million in the year-previous period. During the quarter, ore from the higher-grade Qanaiyaq pit reached 20 percent of total feed to the mill, a level the mine expects to maintain for the remainder of 2018. Qanaiyaq ore is becoming less oxidized as the pit is deepened, with larger percentages of this higher grade material being added in future years. Qanaiyaq ore has significantly higher grade than the Aqqaluk ore and is planned to be a supplemental feed source for the next 10 years. The expected 2018 production of contained metal is now estimated at 525,000 to 545,000 tonnes of zinc contained in concentrate and 95,000 to 100,000 tonnes of lead metal contained in concentrate.

Novagold Resources Inc. achieved a major development milestone by releasing the Final Environmental Impact Statement (EIS) for its flagship Donlin gold project, owned 50 percent with Barrick Gold. The project is on land owned by mineral estate owner Calista Corp. and surface estate owner The Kuskokwim Corporation. The EIS process began when Donlin Gold applied for a federal wetlands permit in July 2012.The Corps worked with cooperating agencies on the EIS, including the U.S. Bureau of Land Management, U.S. Fish and Wildlife Service, U.S. Department of Transportation Pipeline and Hazardous Materials Safety Administration, U.S. Environmental Protection Agency, State of Alaska regulatory agencies and communities of Crooked Creek, Chuathbaluk, Napaimute, Aniak, Akiak, and the Knik Tribal Council. The next step in the federal permitting process will include the Corps preparing a Record of Decision, which consists of a series of findings documenting the process used to determine whether or not to issue a wetlands permit. Prior to a decision to issue the permit, the Corps must send the draft permit to the State of Alaska, which must certify that the approved activities comply with state water quality standards. In addition to permitting, the partners are advancing project optimization efforts, including incorporating data from the 2017 drill program, and identifying potential innovative ideas to reduce initial capital expenditures.

Kinross Gold Corp. announced first quarter 2018 results from their Fort Knox mine. The mine produced 79,928 ounces of gold at a cash cost of $530 per ounce versus 93,038 ounces at a cash cost of $617 per ounce in the year previous period. The mine's production decrease was due to lower mill grades over the year-previous period and the seasonally slower heap leach recovery experienced during colder winter months. The mill treated 3.11 million tonnes (metric tons) of ore grading 0.70 grams of gold per tonne with a mill recovery of 82 percent. The heap leach saw additions of 5.84 million tonnes of ore grading 0.20 g/t gold. A small pit slope failure and anticipated lower head grades are expected to impact grade and costs over the remainder of the year. At the mine's Gilmore project expansion area, feasibility study activities are progressing as planned with results expected in June. The feasibility study is contemplating a multi-phase layback of the Fort Knox pit and the construction of a new heap leach pad.

International Tower Hill Mines reported first quarter results from its Livengood gold project. The company announced a 2018 budget of $5.1 million. The work program incorporated in this budget will continue metallurgical studies undertaken in 2017 to define and refine the project flowsheet. Using the improved mineralization and alteration models now available for the deposit, 4,000 kilograms of metallurgical composites have been selected based on location within the deposit and shipped to SGS Vancouver. Portions of these samples will be processed in 2018 to determine whether different recovery or cost parameters should be applied to different portions of the orebody. Work is also planned to advance the environmental baseline efforts needed to support future permitting.

Alaska newcomer K2 Gold Corp. announced that it had acquired approximately 18,000 acres of state mining claims on their McArthur Creek project along the Yukon-Alaska border. The claims are just a few miles west of K2 Gold's Ladue gold project in the adjacent Moosehorn Range, Yukon. The Moosehorn Range is located along the trace of the arc-related 110- to 70-million-year-old Tintina Gold Belt, a band of felsic intrusions extending from southwest Alaska through the Fairbanks District into the Dawson District in the Yukon and beyond to the British Columbia border. The Moosehorn Range is host to active placer gold mining operations and has produced over 100,000 ounces of placer gold and 4,000 oz of lode gold. While historical exploration has been concentrated on the Canadian portion of the range, the Alaskan side of the range has seen very little modern exploration. Following data review, the company plans to announce work programs and budgets for 2018. Welcome to Alaska K2 Gold!

Avidian Gold Corp. announced plans to raise up to C$5 million via private placement for use on its Golden Zone project in the central Alaska Range, its Amanita project in the Fairbanks District and for general corporate purposes. Current indicated gold resource at Golden Zone is 267,400 ounces in 4.19 million tonnes (metric tons) grading 1.99 grams of gold per tonne and an Inferred gold resource of 35,900 oz in 1.35 million tonnes grading 0.83 grams of gold per tonne.

Trilogy Metals Inc. announced that work has been initiated to estimate a cobalt resource for the Bornite project in the Ambler District. Preliminary results from on-going geometallurgical studies demonstrate an understanding of cobalt mineralogy and distribution sufficient to warrant initiating a cobalt resource estimate. When completed, this metallic resource would be in addition to the current copper resource on the project. The work has been focused on examining metallurgical products from both the in-pit resource area and the higher-grade below-pit copper resource area along with standard petrographic and microprobe work. Work on in-pit and below-pit samples concluded that cobalt is found primarily within three mineral species: cobaltiferous pyrite, cobaltite, and carrollite. More than 80 percent of the cobalt is found in pyrite which preferentially reports to the copper tails. Further test work will be forthcoming on producing a cobaltiferous pyrite concentrate. At a 100 part per million cutoff, cobalt assays range from 0.01 percent to 0.04 percent cobalt and includes intervals such as 18.44 meters grading 0.35 percent cobalt in hole RC-34, 36.85 meters grading 0.1 percent cobalt in hole RC11-0187, and 6.79 meters grading 0.42 percent cobalt in hole RC11-0184. With cobalt being a critical mineral for the U.S. and a metal in increasing demand for battery technologies and high-tech applications, its value at Bornite could add materially to the project's over-all economics. 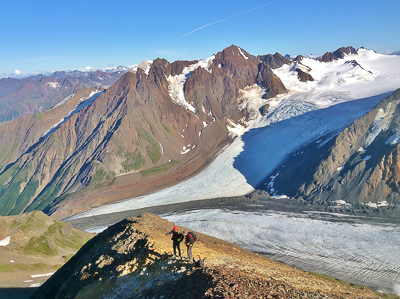 Constantine Metal Resources Ltd. and joint venture partner Dowa Metals & Mining Company Ltd. announced its 2018 exploration plans for the Palmer volcanogenic massive sulfide deposit. The program will include a 10,000-meter diamond drill program using two rigs starting early June. The 2018 drill program will continue to have a dual focus of exploring for new deposits like the AG zone and systematically defining and expanding the South Wall-RW Zone mineral resources. Drilling will also test new geophysical targets identified by a regional 1,137 line-kilometer airborne electromagnetic survey completed over the project last year. Multiple targets sharing similar geophysical characteristics to the known South Wall deposit have been defined, several of which coincide with areas of volcanogenic massive sulfide style mineralization and hydrothermal alteration exposed at surface. The company also will complete an updated mineral resource estimate incorporating drilling and analytical data acquired since the resource was last updated early 2015. This new estimate will include results of metallurgical test work currently underway, including assessing the viability of barite as a marketable commodity. Upon completion of the updated resource, a preliminary economic assessment, the first such study to be commissioned for the project, will gauge the potential economic viability of the mineral resources. Completion of this study is targeted for the fall of 2018. The partners also intend to advance the planning and permitting of an underground exploration program that would include development of an underground access ramp. This access would provide a platform for drilling to expand the South Wall deposit at depth and along strike, allow for the upgrading of existing mineral resources to support economic studies, allow for collection of important metallurgical, environmental and geotechnical data and enable the project to transition to year-round underground exploration.