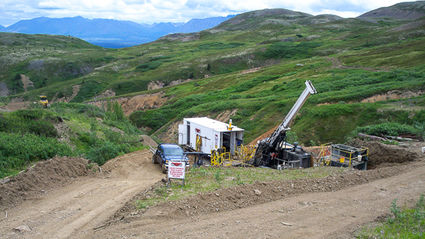 Avidian Gold's 2017 drill program at Golden Zone identified new gold potential across the wider property, some of which are being test with a 2018 drill program now underway.

Avidian Gold Corp. June 5 said a 2018 drill program is now underway at Golden Zone, with an initial focus on following up on the significant intercepts and "new discoveries" drilled during the 2017 program.

Located about midway between Anchorage and Fairbanks, the Golden Zone property hosts numerous gold targets along an 8,000-meter-long trend. Breccia Pipe, the most advanced of these, is a deposit with 4.19 metric tons of indicated resource averaging 1.99 grams per metric ton (267,400 ounces) gold and 10.38 g/t (1.4 million oz) silver.

Seven of the holes drilled last year were in the area of the Breccia Pipe resource.

One hole drilled 300 meters northeast of the deposit cut 21.6 meters averaging 1.46 g/t gold. Avidian said this mineralization is open in all directions and represents a new stratigraphic target at Golden Zone.

Riverside, an occurrence south of Breccia Pipe, hosts some the highest gold values on the property, such as 177.5 g/t gold from a 0.3-meter-wide quartz-arsenopyrite vein and 1.49 meters of 34.6 g/t gold from a historical channel sample.

Avidian said the Riverside occurrence is associated with a quartz-feldspar porphyry that has been traced for more than 1,000 meters on surface.

The 2018 drill program will also begin testing other high-grade gold occurrence found along an 8,000-meter-long trend on the property.

Later in the season drills will test the Copper King prospect, where previous work has identified semi-massive sulfide in a skarn.