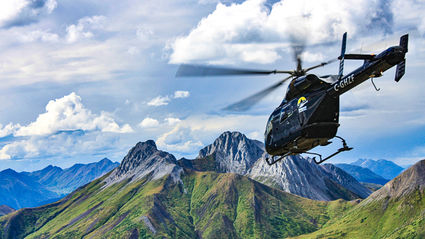 A helicopter flies over the site where ATAC Resources discovered Carlin-type gold mineralization at the Osiris project on its expansive Rackla Gold property in the Yukon.

ATAC Resources Ltd. June 18 reported a 1.69-million-ounce maiden gold resource for Osiris, one of three projects that make up the 1,700-square-kilometer (656 square miles) Rackla Gold property in the Yukon.

Osiris is where ATAC first discovered Carlin-type gold, which is found in sediment hosted deposits where very fine-grained gold is typically associated with pyrite or arsenopyrite. This type of gold mineralization gets its name from the Carlin Mine in Nevada, where it was first recognized in the 1960s.

"Defining a maiden resource with over one million pit-constrained ounces is a major development for the company and highlights the emerging high-grade open-pit potential," said ATAC President and CEO Graham Downs. "With only 78,614 meters used to define the resource we achieved an excellent discovery rate of over 21 ounces of gold for every meter drilled."

The rest of the resource is found in the Osiris, Sunrise and Ibis zones.

"With the announcement of this maiden resource, it appears that the early stage Osiris project may have the potential to follow a 'life-cycle' path similar to many of the large producing Carlin-deposit mines in Nevada. Many of these mines started life with an initial open pit followed by underground mining," said Ed Cope, a technical advisor to ATAC. "In many cases, the initial discoveries expanded dramatically with additional exploration and were commonly followed by the discovery of more, and often larger, deposits resulting in the great mining camps of the Nevada trends. Classic examples are represented by the original Carlin Mine, Goldstrike, Cortez and Getchell-Turquoise Ridge, to name a few."

Cope, who retired as vice president, North America for Barrick Gold in 2016, knows a bit about these classic examples of Carlin-type deposits. During his 21 years at Barrick, Cope helped build and guide the technical teams responsible for defining some of the major gold miner's largest gold deposits within the Carlin and Cortez trends in Nevada.

ATAC is looking to expand the maiden resource at Osiris with a 10,000-meter drill program slated for this year.

"Expansion drilling is in full-swing with two drills focused on step-out drilling at the eastern end of the Conrad zone," said Downs.

Drilling at Sunrise is scheduled to begin soon.

ATAC says there is excellent potential for new discoveries across the 302-square-kilometer (117 square miles) Osiris Project.

Additional mapping, prospecting and rotary air-blast drilling will be conducted throughout the Osiris project to test for extensions or new areas of mineralization.

As ATAC looks to expand the gold resource at Osiris, Barrick is carrying out a roughly 10,000-meter drill program at Orion, a 780-square-kilometer (301 square miles) project immediately west of Osiris and in the middle of ATAC's roughly 185-kilometer- (115 miles) long Rackla land package.

Like Osiris, the Orion project is rich in Carlin-type gold mineralization.

Barrick's initial program, carried out last year, demonstrated that favorable environments for the development of gold mineralization at Orion are more extensive than previously understood.

The 2018 drilling is expected to primarily focus on the 6,000-meter-long Anubis Fault corridor, where ATAC cut 8.5 meters of 19.85 grams per metric ton gold in the Anubis zone and 61.3 meters of 2.75 g/t gold in the Orion zone prior to optioning the property to Barrick.

Nine other prospecting discoveries within the Anubis Cluster (Ana, Corona, Columba, Dale, Dorado, Draco, Hydra, Lyra and Zodiac) have received only cursory follow-up since their discovery in 2013.

"Our technical team will work alongside Barrick to unlock the discovery potential we see emerging at the Orion project," Downs said earlier this year.