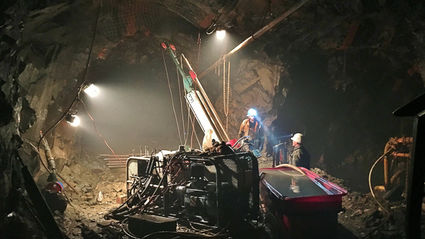 The 29,312-meter underground drill program carried out at Red Mountain in 2017 has resulted in a 20.7 percent increase in the measured and indicated resources for this gold mine project in northwestern British Columbia.

IDM Mining Ltd. June 19 reported a 20.7 percent increase to the gold contained in measured and indicated resources at its Red Mountain Mine project near Stewart in northern British Columbia.

In addition, the underground mine project hosts 316,000 metric tons of inferred resource averaging 6.04 g/t (61,400 oz) gold and 7.6 g/t (77,200 oz) silver. This marks a roughly 5 percent decrease in this category, as most of the inferred resources in three planned mining zones – Marc, AV and JW – were upgraded to the higher confidence measured and indicated category. Roughly 82 percent of the current inferred resources are found in new zones – Smit, SF, Bray, Chicka and Cambria Zones – indicating the potential for future expansions at Red Mountain.

IDM Mining said future drilling at Red Mountain will target expansion to gold mineralization along a brecciated horizon identified by geological interpretation of the 2017 program, in high-priority areas such as between the Marc and 141 zones, north and west of the Smit zone and east of the SF zone. Upgrading inferred resources will also be targeted during the next phase of drilling.

This updated mineral resource estimate, along with improved geological interpretation and engineering optimization work, will support an updated feasibility study expected to be completed in the autumn of 2018.

A feasibility study completed in 2017 outlines plans for a 1,000-metric-ton-per-day operation that is expected to average roughly 78,000 ounces of gold per year over an initial six-year mine-life.

The study identified a number of areas to enhance the proposed Red Mountain Mine.

Optimization studies since the completion of the feasibility study have focused on metallurgy and processing, road design, geohazards, and powerline interconnection with BC Hydro.

"Coupled with the advanced stage of the EA and EIS review, along with the ongoing and thorough consultations with the Nisga'a Lisims Government, we believe that Red Mountain will be the next underground gold mine in B.C.," said McLeod.