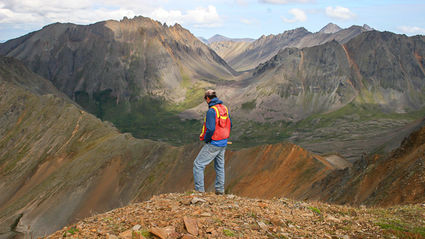 The summer field season is in full bloom across Alaska with programs stretching from the Brooks Range to southeastern Alaska, and from the Yukon border to southwestern Alaska. Exploration targets range from grassroots to mine-site, focused on commodities including gold, silver, lead, zinc, copper, cobalt and graphite.

For Alaska's exploration industry, planned, announced and estimated expenditures are well over the $100 million mark for 2018. This expenditure level is well above last year's levels and almost double the $58 million spent at the bottom of the market in 2015.

Canadian and Australian companies continue to be the source for the bulk of funds spent in Alaska in 2018, together comprising well over 80 percent of the exploration expenditures earmarked for Alaska.

Riversgold Ltd. announced updated plans for 2018 exploration at its gold projects in southwestern Alaska. Efforts will include refinement of drill targets at Luna, Luna East and Quicksilver using a combination of induced polarization (IP) and surface geochemical sampling surveys; project-wide geological mapping of the Luna-Quicksilver prospect using the detailed helimagnetic survey data flown in mid-2017; diamond drilling of high-grade gold targets at Luna, Luna East, Quicksilver and Kisa prospects; drill testing of potential high-grade gold-copper skarn targets adjacent to the North Fork Pluton; and rock chip and soil sampling to outline the extent of high-grade gold-antimony mineralization at the Gemuk Mountain prospect. Efforts in July will consist of IP and geochemical surveys on the 5,000 meters of strike between the Quicksilver and Luna targets where approximately 50 percent of the area is hidden beneath shallow glacial till and/or alluvium. Outcropping high-grade gold mineralization at Luna and Luna East has been observed where the mineralized structure is cut by a creek. Approximately 1,000 meters of diamond core drilling to be conducted over several targets including at Luna, where outcropping stockwork in sediments with rock chip samples up to 64.7 grams of gold per metric ton with associated arsenic, silver, antimony and bismuth; at Luna East, where outcropping massive sulfide mineralization with rock chip returned up to 1.2 percent copper and 90 g/t silver associated with arsenic, bismuth and antimony; at Quicksilver, where a 1,000-meter zone of outcropping veins within the North Fork Pluton returned rock chip values up to 37.6 g/t gold with associated arsenic, silver, antimony and bismuth; at Kisa (Golden Dyke), where a 4,000-meter swarm of felsic dykes within sediments returned rock chips grading 0.5 to 8 g/t gold with associated arsenic, bismuth, antimony and copper; and at two large magnetic anomalies adjacent to the North Fork Pluton which are interpreted to represent skarn potentially similar to the high-grade Nixon Fork gold-copper deposit.

Kinross Gold announced that it will proceed with a multi-phase layback of the Fort Knox pit and the construction of a new heap leach pad to access resources in the Gilmore land package it recently acquired on the west end of its existing open pit. The expansion is expected to extend mining at Fort Knox by six years to 2027, and leaching to 2030, at a low initial capital cost of approximately $100 million and an increased life-of-mine production of roughly 1.5 million gold-equivalent ounces. The project is expected to generate an internal rate of return (IRR) of 17 percent and net present value (NPV) of $130 million based on a $1,200 per ounce gold price; and an IRR of 26 percent and NPV of $239 million based on a $1,300/oz gold price. Life-of-mine stripping ratio is 1.2:1 and average grade of the new resources is 0.35 grams of gold per metric ton. All-in sustaining cost of production is estimated at $950/oz. Construction of a new heap leach site and dewatering will be commenced in the third quarter of 2018 with stripping starting in 2019 and initial production starting in 2020. Current plans call for conversion of operations to heap leaching only with milling expected to end in 2020. With the Gilmore block resources added to existing resources, the mine carries 3.37 million oz of proven and probable gold reserves at a grade of 0.37 g/t gold, 1.8 million oz of measured and indicated gold resources at a grade of 0.38 g/t gold and 1.09 million oz of inferred gold resources at a grade of 0.32 g/t gold.

Freegold Ventures Ltd. announced that planning is underway for an additional oxide expansion program at its Golden Summit project near Fairbanks. The 2018 program is expected to focus on the target areas to the southwest and to the west of the current oxide resource, as well as the planning for an initial drill test of an area located 1,500 meters west of the current Dolphin resource, where during 2017, both a ground geophysical survey as well as soil sampling programs were carried out. Results of these programs outlined a potential expansion target well west of the previously identified expansion area. This new resistivity anomaly with coincident geochemistry covers a 1,500- by 300-meter area. Follow up drilling is also being planned on what Freegold believes may be the extension of the high-grade Cleary Hill vein in an area of no previous drilling. The Cleary Hill mine produced 281,000 ounces at an average grade of 1.3 ounces of gold per metric ton until its closure in 1942. In addition to the oxide expansion further infill and definition drilling on both the oxide and sulfide material as well as additional metallurgical test work and significant baseline studies will need to be completed in order to advance the project to a pre-feasibility stage. The 2016 preliminary economic analysis envisioned a 24-year two phase oxide and sulfide operation, which combined, provides for an after-tax 19.6 percent internal rate of return and a net present value of $188 million (5 percent discount rate) over a 24-year life of mine, using a $1,300 gold price. The preliminary economic assessment requires both the oxide and the sulfide material to be developed in order to realize the project economics.

Avidian Gold Corp. announced that drilling has commenced at its Golden Zone project in the central Alaska Range. The drilling program will initially focus on following up on the significant intercepts and new discoveries from the 2017 drilling program. These targets include intercepts outside of the current breccia pipe resource area and a previously unknown mineralized conglomeratic unit approximately 300 meters northeast of the Breccia Pipe, where 2017 drilling returned 21.6 meters grading 1.46 grams of gold per metric ton. This new mineralized stratigraphic target remains open to expansion in all directions. Follow-up drilling is also planned at the Riverside occurrence which returned multiple intercepts of greater than 1 g/t gold, along with 3.4 meters of 4.23 g/t gold, including one meter of 12.2 g/t gold, associated with a quartz feldspar porphyry that can be traced over 1,000 meters in length. Drilling also is planned at the Copper King prospect, where historical drilling returned eight meters of 4.9 g/t gold, 77 g/t silver and 3.5 percent copper.

PolarX Limited announced that drilling has commenced at the Zackly prospect on its Alaska Range project. The two-drill, 23-hole, 5,000-meter drilling program is designed to expand the known high-grade Zackly copper-gold skarn deposit along strike and at depth. The style of mineralization at Zackly is consistent with the nearby presence of a porphyry copper-gold system. The company also intends to further define the copper-gold porphyry intrusive targets at Mars, Gemini and Zackly SE over the coming weeks to advance them to the drill stage. Work also is planned at Moonwalk where a 500- by 700-meter area returned average soil values of 1.15 grams per metric ton gold and rock samples returned values up to 30.45 g/t gold.

Trilogy Metals Inc. announced an initial resource estimate for cobalt resource at its Bornite project in the Ambler District. At a base case 0.50 percent copper cut-off grade, and within the combined indicated and inferred copper resource pit-shell, the Bornite project is estimated to contain in-pit inferred resources of 124.6 million metric tons grading 0.017 percent cobalt, for 45 million pounds of contained cobalt. In addition, below the resource limiting pit shell and at a base case cut-off grade of 1.5 percent copper, the deposit is estimated to contain additional inferred resources of 57.8 million metric tons grading 0.025 percent cobalt, for 32 million lb of contained cobalt. This brings total inferred resources to 182.4 million metric tons grading 0.019 percent cobalt, for 77 million lb of contained cobalt. Results from metallurgical studies indicate that cobalt occurs predominantly as cobaltiferous pyrite which preferentially reports to the copper tailings. As a result of this test work, the company has determined that a cobalt product may be produced on site and therefore justifies additional evaluation as a recoverable metal. In other project news, the company plans to complete approximately 8,000 meters of drilling in a combination of infill and expansion drill holes in and around the known Bornite deposit. The 2018 program will follow up drilling completed during the 2017 exploration program where holes represented 300- and 400-meter step outs and defined a mineralized footprint measuring 1,500 by 2,500 meters defined by grade-thickness intervals in excess of 50 meters averaging at least 1 percent copper. In addition, a 12-line kilometer 2D seismic survey commenced in early May. This seismic survey is designed to track the massive sulfide zones as well as basement and other structures to assist with exploration targeting. The seismic program is expected to be completed in mid-June with data processing and evaluation taking place in July and August

Trilogy Metals Inc. also announced 2018 plans at its Arctic project in the Ambler District. The company approved a $6.7 million budget to advance the project towards feasibility and permitting. The focus of the work program for the remainder of the year is to be on geotechnical and hydrological engineering studies at the project's proposed waste and tailings sites with the objective to advance the engineering design for these facilities to a feasibility level of study. A number of geotechnical and hydrological drill holes are to be completed to support this effort. The company also expects to gather extensive environmental data for a variety of studies to support the submission of a mine permit application in 2019. 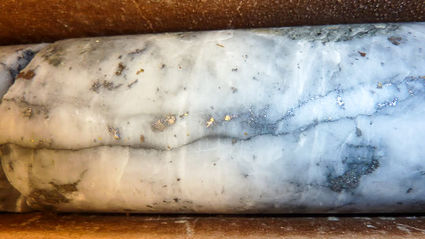 The visible gold in this core is from a section of a 2011 hole drilled into the Deep Trench vein at Grande Portage Resources' Herbert Gold project that averaged 1.08 ounces per ton gold over 8.76 meters.

Grande Portage Resources Ltd. announced an updated resource estimate for its Herbert Gold project near Juneau. The resource estimate is based on 143 drill holes totaling 22,090 meters of drilling. The new resource contains indicated resources of 1.11 million metric tons containing 257,950 ounces of gold at 7.25 grams of gold per metric ton and an inferred resource of 423,200 metric tons containing 82,200 oz of gold at 6.04 g/t gold, both at a 2.5 g/t gold cut-off. The system is open to length and depth and is host to at least six main composite vein-fault structures that contain ribbon structure quartz sulfide veins. The company also announced its intent to raise up to $5.5 million dollars, most of which will be directed at exploration and development of the Herbert Gold project.