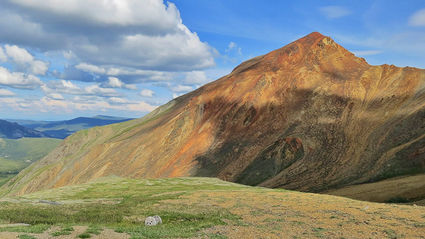 To formalize this strategic relationship between the two Australian companies, Sandfire has agreed to acquire 208.33 million shares of White Rock at AU1.2 cents per share, for a total of AU$2.5 million. The per-share price is 41 percent premium over the one-month volume-weighted-average price of White Rock shares through July 9.

Following completion of the financing, Sandfire will own roughly 14.2 percent of White Rock.

This initial investment in White Rock will provide Sandfire an exclusive option to enter into an earn-in joint venture agreement in Red Mountain, which is exercisable until the end of the year.

While the details of the option have not been formalized, the principles agreed upon by the companies would have Sandfire earning up to a 90 percent interest in Red Mountain by investing AU$30 million into Red Mountain and then funding a feasibility study.

This would be a four-stage investment under which Sandfire would fund AU$20 million over the first four years to earn a 51 percent interest in Red Mountain, including at least AU$6 million during the first year; a further AU$10 million and deliver a pre-feasibility study over an additional two years to earn 70 percent; if White Rock elects not to contribute in the JV during stage 3, Sandfire could increase its ownership to 80 percent by completing a feasibility study; and if White Rock does not contribute to the final stage, Sandfire's ownership would increase to 90 percent and White Rock's 10 percent interest would be earned from cash flow from operations at Red Mountain.

Once Sandfire earns a 15 percent interest in White Rock, it will have the option to elect a director to the exploration company's board.

White Rock would continue managing exploration at Red Mountain at least through the first year of the earn-in and would be paid a management fee for its services. Ongoing management responsibility of the project will be subject to annual review and after the first year will be at Sandfire's election.

White Rock said this agreement allows it to benefit from Sandfire's significant technical expertise to develop the Red Mountain Project as well as further strategic support as the company moves to unlock the potential from its large strategic land holding.

"Securing a high-quality partner with world leading expertise in the exploration and development of base metals projects is a strong endorsement to the quality and potential of White Rock's globally significant high-grade zinc VMS Red Mountain project," said Gill. "White Rock looks forward to collaborating with Sandfire as part of this new strategic relationship."

The initial focus of the 2018 drill program at Red Mountain, which got underway in May, is on upgrading and expanding these deposits.

"This drilling represents a significant extension to the Dry Creek deposit and notably down dip at both the Fosters and Discovery lenses," said White Rock CEO Matt Gill. "These first two extension drill holes highlight the upside potential for a significant expansion to the resource at Dry Creek, both in terms of grade and size." 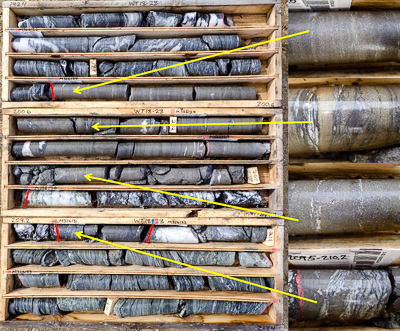 "These first drill assay results for the Dry Creek and West Tundra deposits validate our belief that these two deposits form part of a genuine high-grade zinc-rich polymetallic VMS mineralization system," said Gill. "Our exploration program focus is to expand the maiden resource and to identify and test new targets to make the additional discoveries."

White Rock's 2018 exploration at Red Mountain is continuing to target expansion of the known deposits, as well as test some of the 30 earlier staged prospects across the roughly 35,000-acre property.

This work is expected to get a boost from Sandfire's initial investment in White Rock and the project could see increased activity in coming years if the Australian miner decides to exercise its option to become a strategic partner in this zinc-rich VMS project in Interior Alaska.