Interior mine to spread global excellence for years to come North of 60 Mining News – August 17, 2018 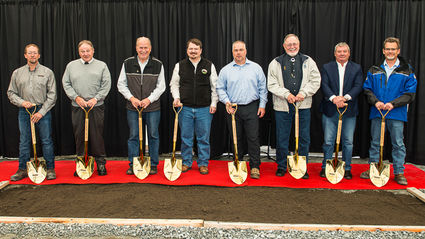 FAIRBANKS: An Aug. 15 ceremonial groundbreaking for the Gilmore expansion at Kinross Gold Corp.'s Fort Knox Mine marked a new chapter in the life of this important gold operation in the heart of Alaska's Interior.

Gilmore, however, is not just an extension tacked onto the end of an ageing mine. Instead, this exciting new project is more likely a bridge to further expansions of one of the largest and most successful mines in Kinross' global portfolio of gold operations.

"We see a lot of potential, we are going to keep exploring, and I personally believe this is the first of many phases of expansion," Kinross Gold President and CEO J. Paul Rollinson told the crowd gathered at Fort Knox for the celebration.

Gilmore and future expansions that are expected to take Fort Knox deep into the 21st Century is good news for the 630 Fort Knox employees, 150 contract workers who take home healthy paychecks from working at the mine; the local businesses, suppliers and contractors the mine does business with; and the Fairbanks North Star Borough, which benefits from the tax revenue this long-lived gold operation generates.

In fact, the Fort Knox Mine has paid US$80 million in wages; spent US$188 million on goods and services from some 350 Alaska business and vendors; and paid US$8.8 million in property taxes to the borough.

"Plain and simple, this is a great day for Fairbanks," Alaska Gov. Bill Walker said. "Because of this new investment by Kinross Gold, Interior Alaska will enjoy another decade of high-paying jobs at the mine and an influx of revenue that support schools, roads, and public safety."

While Fort Knox' benefits are most acutely felt by the people living in the Fairbanks area, this mine's influence is found throughout Alaska, across the United States and around the world.

Above the millions of dollars of taxes and fees paid to the state each year, or the endowments and scholarships donated to the University of Alaska Fairbanks, the Fort Knox Mine is a shining example of excellence in mining, safety and environmental stewardship.

Because of this, many Kinross employees pass through Fort Knox on their way to the company's global mining operations.

"Fort Knox is like a Kinross university," said Rollinson. "There are Fort Knox alumni at all those operations around the world."

Above serving as a training ground for Kinross employees, the Fort Knox campus has developed gold recovery technology that provides Kinross a key competitive advantage.

Heap leach, a process that involves stacking the ore on a lined pad and using a mildly acidic leaching agent trickled over the ore to dissolve the gold into a solution that is pumped through a facility for recovery, had previously been considered best suited for warm climates.

Fort Knox has developed solutions that defy the previous idea that this method is not suitable for a region where winter temperatures fall to minus-40-degrees Fahrenheit and colder.

In fact, the Walter Creek Arctic Heap Leach facility at Fort Knox has been churning out roughly 125,000 oz of gold annually since 2009 and crossed the 1-million-oz threshold early this year.

The other 6-million-plus ounces have been recovered by the more conventional mill at the Interior Alaska operation.

With nearly all the Gilmore gold expected to be recovered from heap leach, the mill at Fort Knox is currently slated to be phased out by the end of 2020.

Kinross has begun early construction on the Barnes Creek Heap Leach Pad, a new facility that will accommodate the ore from Gilmore.

Kinross may have not intended to develop mine safety curriculum on its Fort Knox campus, United States Mine Safety and Health Administration Assistant Secretary David Zatezalo, however, requests they do so.

While safety at mines across the U.S. has significantly improved over the past two decades, Zatezalo said the operations of the large machines needed to move massive amounts of dirt and rock is an area that needs further attention.

"Power haulage is the leading killer in our industry," he said.

The safety secretary said this single issue accounts for more than half of all fatalities at U.S. mines and MSHA is looking for a solution.

"I wanted to come to Fort Knox because apparently Fort Knox already has a solution," Zatezalo said.

This solution has a lot to do with the innovative safety program at Fort Knox known as "See it, Own it, Solve it," or SOS.

SOS encourages employees to identify and solve unsafe conditions and behaviors at the mine site. This program empowers the employees to be a key part of the solution and create a culture of safety at Fort Knox.

Zatezalo would like to see the safety program that has worked so well at the Fort Knox campus in Alaska spread to more mines across the nation and has asked mine management to send a write-up of its safety program to MSHA headquarters in Washington D.C.

"My challenge to Fort Knox people is, let's take what you are doing and spread it out," the MSHA secretary said.

Fort Knox will likely spread its safety culture and serve as a type of university for Kinross for decades to come.

Kinross COO Lauren Roberts, who was general manager at Fort Knox before moving to the global miner's executive office in Toronto, expects this iconic Interior Alaska gold mine will continue well past Gilmore.

"Gilmore is the toehold that allows us to explore the full potential of this property," he said. "We needed a decade to give us more time to look through the analysis to see what we can do with this going forward and we plan to be here for many years to come."

The orebody currently being mined has not yet been fully delineated and Kinross sees further expansions in both the original Fort Knox pit and Gilmore.

The company said the first few holes drilled this year on the east side of the current open-pit have returned encouraging results and drilling there is ongoing. 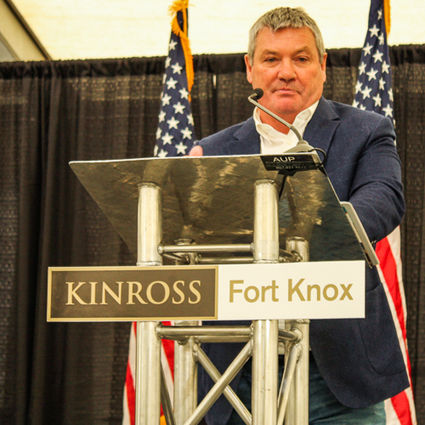 For these reasons, Rollinson considers the Aug. 15 Gilmore groundbreaking as a celebration of "the initial expansion" at Fort Knox.

"We are really excited about what we have been able to achieve but we're not standing still, we are going to keep looking forward," said the Kinross Gold CEO.