An aerial view of the Bornite camp, where Trilogy Metals and South32 have five drills expanding deposits of high-grade copper and cobalt.

With initial results from the 2018 drilling at Bornite topping 5 percent copper, Trilogy Metals Inc. and South32 Ltd. have decided to extend this year's program at the Upper Kobuk Mineral Projects in the Ambler Mining District of Northwest Alaska.

Trilogy has only received partial assay results from one hole drilled this year, but the results are impressive.

"We are pleased to report that the high-grade copper and cobalt zones demonstrate continuity and continue down-dip," said Trilogy Metals President and CEO Rick Van Nieuwenhuyse. "We look forward to reporting additional results as they become available."

The most recent resource calculations estimate that Bornite hosts roughly 6.36 billion pounds of copper and 77 million lb cobalt, part of which is currently considered amenable to open-pit mining and the balance better suited for an underground operation.

A cobalt resource calculated for Bornite was also divided into the areas proposed for open-pit and underground mining.

A US$10 million drill program funded by South32 in 2017 focused on expanding the underground portion of Bornite north.

Highlights from the 2017 drilling include:

While last year's drilling demonstrated that the high-grade copper covers a 1,500- by 2,500-meter area beyond the previously defined underground portion of Bornite, the holes were too widely spaced to calculate a resource for this expansion area.

The objective of the 2018 drilling campaign is to infill and expand the currently defined open pit and underground mineral resources.

Towards this goal, Trilogy has completed 5,267 meters of drilling in five holes so far this year and the drilling is intensifying.

South32, which has already budgeted US$10 million for the 2018 program at Bornite, has agreed to increase its contribution by US$800,000.

Early last year, South32 cut a deal with Trilogy that gives the Australian major the option to acquire a 50 percent joint venture interest in the Upper Kobuk Mineral Projects for US$150 million.

To keep this option open, South32 agreed to invest US$30 million on the project over three years, funds that have been spent on expanding Bornite.

With the added 2018 funding, South32 will have invested US$20.8 million into UKMP, leaving a minimum exploration budget commitment of $9.2 million for 2019.

With the additional funds, Trilogy is adding two drills to this year's program.

With five rigs turning at Bornite until mid-September, nearly 10,000 meters of drilling is expected to be completed this year. This, along with the 8,437 meters drilled last year, will be used to calculate an updated copper-cobalt resource for Bornite.

Trilogy has also initiated a metallurgical study to investigate various methods of recovering both the copper and cobalt at Bornite.

Initial results from the metallurgical program are expected early in 2019 followed by the updated Bornite resource calculation.

With this information in-hand, Trilogy plans to move forward on a preliminary economic assessment that will provide the first glimpse of the viability of a combined open-pit and underground mining operation at Bornite.

The PEA is expected to be completed by the end of the second quarter of 2019.

In addition to the US$10.8 million program at Bornite, Trilogy is investing US$6.7 million into advancing a feasibility study for Arctic, roughly 16 miles to the north.

A prefeasibility study published earlier this year details plans for an open-pit mine to extract the volcanogenic massive sulfide mineralization at Arctic and a 10,000-metric-ton-per-day mill to produce metals-rich concentrates to deliver to markets.

At base case metals prices – US$3 per lb copper, US$1.10/lb zinc, US$1/lb lead, US$18 per oz silver and US$1,300/oz gold – the Arctic Mine outlined in the PFS is expected to pay back the initial capital expenditures during the second year of operation.

The pre-tax net present value (8 percent discount) of this operation, from the beginning of the three-year construction period, is calculated to be US$1.94 billion and the pre-tax rate of return is 38 percent.

Ore sorting, a technique that identifies un-mineralized rock and separates it prior to the mill, has the potential to improve the already robust economics for the proposed mine at Arctic. An ore sorter placed ahead of the mill improve the head grades of material being processed at the proposed Arctic grinding mill by eliminating waste rock.

The recent pre-feasibility study estimates between 20 and 30 percent dilution from unmineralized rock at the mine face within the proposed Arctic pit. By kicking off half of this material before it goes into the mill, an ore sorter has the potential to further improve the economics of the Arctic Mine project detailed in the coming feasibility study.

Ore sorting test work at the Steinert Labs facility in Kentucky has been completed and Trilogy expects to evaluate the potential for capital and operating cost savings based on the initial results before the end of the year.

Trilogy is also gathering extensive environmental data – hydrology, wetlands delineation, meteorological and archeology – in preparation of its plan to submit a mine permit application for Arctic by mid-2019.

Given that no federal lands are involved with the Arctic Mine project – UKMP is made up of state mining claims held by Trilogy and private lands owned by NANA Regional Corporation Inc. – Trilogy estimates it will take two to three years to complete the permitting process for this first operation in the Ambler Mining District.

Ideally, the Ambler road and Arctic Mine would be completed at about the same time. To keep the road side of this development on schedule, AIDEA submitted applications in 2016 for rights-of-way, permits and related authorizations needed.

With the public scoping phase for the Ambler Road wrapped up in January, the U.S. Bureau of Land Management is working on the draft environmental impact statement for the industrial access. This will be followed up with another opportunity for the public to weigh in and for the BLM to consider this input prior to issuing a final EIS and then record of decision on the road.

The Ambler Road has received a vote of confidence from two of the largest stakeholders in northern Alaska – the Northwest Arctic and North Slope boroughs. In early July, these neighboring municipalities that blanket an enormous mineral- and oil-rich area of Alaska signed a joint resolution in support of the proposed transportation corridor. 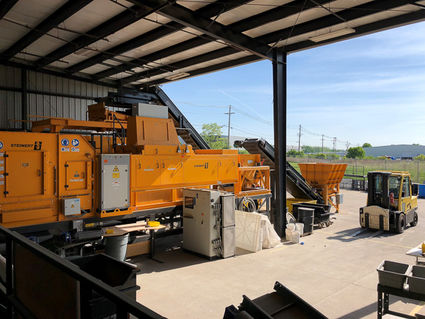 This particle sorting plant at Steinert Labs in Kentucky was used to test whether such a technique could improve head grades and reduce tailings by eliminating unmineralized material prior to milling.

"The Northwest Arctic Borough and North Slope Borough governments represent home-rule governments of the people of northern Alaska. We support resource development in our boroughs that respects the Inũpiat culture and protects our subsistence resources and the environment," said Northwest Arctic Borough Assembly President Nasruk Carl Weisner. "We support completing the environmental impact assessment statement on the Ambler Access Road."

During a joint assembly held in Barrow, the boroughs also voiced an interest in investing in the Ambler Road.

"(B)oth boroughs shall explore opportunities for co-investment and ownership," according to a resolution signed by mayors and assembly presidents of the northern boroughs.

The draft EIS for AMIDAR is expected to be completed by BLM by the end of March.

Editor's Note: Further information on the Ambler road and the 2018 work at Upper Kobuk Mineral Projects can be found in Resolved to help build the Ambler Road, an article published by North of 60 Mining News on Aug. 3.

Correction: The 2018 program at Bornite has been increased to US$10.8 million, this article has been corrected.