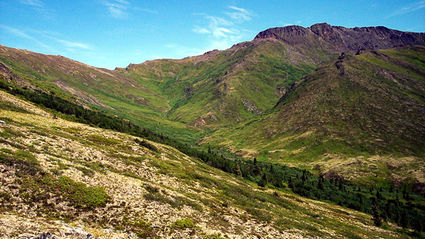 A view of Valhalla Metals' recently acquired Sun, a property at the eastern end of the Ambler District that hosts a 10.7 million metric ton VMS deposit rich in zinc, lead, copper and silver.

Anchored by the Arctic deposit on lands held by Trilogy Metals Inc., this region of Northwest Alaska is celebrated for a 70-mile- (110 kilometers) long belt of world-class VMS deposits and prospects rich in copper, zinc, lead, silver and gold. While many of these are found on Trilogy's property, Sun, a large VMS deposit at the east end of the Ambler Belt, was not.

With permitting moving ahead for an industrial access road that passes through Sun's front yard on its way to Trilogy's Arctic Mine project, Valhalla Metals President Freeman and others with Alaska mining experience formed Valhalla Metals to acquire promising assets in the emerging Ambler Mining District.

"This most recent move on access puts the entire district back on the map," Freeman told Mining News.

Sun – a 10.7 million metric ton VMS project rich in zinc, lead, copper and silver – is the hottest of the projects acquired by Valhalla.

Discovered by Bear Creek Mining Company, the exploration arm of Kennecott Copper Corp., Sun has drawn the interest of numerous mining companies over the past five decades.

The latest exploration on the property was carried out by Andover Mining Corp., which focused on expanding and upgrading the high-grade VMS deposits at Sun from 2007 through 2013.

Like so many other junior mineral exploration companies at the time, however, Andover was a victim of the sharp downturn in mining markets and could not finish its work at Sun.

Andover's exploration, however, did complete the drilling necessary to upgrade and expand the known deposits at Sun and identified new prospects that show the potential of the wider area.

This work put Andover on the cusp of calculating an updated resource for Sun, but the company was forced to file bankruptcy before the technical report to support this new calculation was finalized.

An investor that held a significant stake in Andover, however, did retain the data from this work, which Valhalla acquired.

With this information, Valhalla hired Mine Development Associates, the mine engineering firm that was working on the resource estimate for Andover, to finish the NI 43-101-compliant technical report.

With 10.73 million metric tons of resource averaging 10.97 percent zinc-equivalent – calculating the value of all the metals in both resource categories – Sun hosts the size and grade to be deemed a world-class VMS deposit.

When it comes to land ownership and mineral tenure, the waters can get muddied when a bankruptcy is involved.

The same Andover investor that held the technical data for Sun also held the Alaska mining claims covering this metals-rich deposit. Instead of transferring the claims, the investors let them lapse. This allowed Valhalla to stake roughly 36,800 acres of fresh mining claims, ensuring that there was no confusion of ownership and mineral rights at Sun.

The newly staked claims provide Valhalla with a lot of ground to explore.

"The mineral resources at Sun are open for further expansion, and the exploration potential of the property beyond the limits of the resource area is considered to be excellent," Mine Development Associates penned in its technical report.

The current Sun resource is contained in two related deposits separated by a fault – Main Sun and SW Sun. Picnic Creek, about 750 meters north of Main Sun, could significantly expand the already large VMS deposits that make up the resources.

"Four horizons of sulfide mineralization have been recognized at the Picnic Creek prospect area, but the drilling is sparse, and details of the mineralized extents are uncertain," according to the technical report.

The technical report recommends roughly 3,000 meters of infill drilling within this main resource area, which Valhalla plans to carry out during its inaugural drill program at Sun in 2019.

In addition to upgrading and expanding this resource, this work will provide material for further metallurgical testing.

Beyond the known deposits, the 36,800-acre Sun property offers Valhalla a lot of early staged prospects to explore.

One such prospect, Sal, lies about five miles west of Main Sun.

Strong alteration and iron staining within the prospective rock package at Sal has been mapped for some 200 meters along strike before being lost beneath cover.

An exploration program that is expected to include mapping, sampling and Lidar surveys across the wider Sun property is also being considered for next year.

Along the Ambler Road

In addition to size and grade, a mine at Sun would need a means of delivering the metals-rich concentrates produced there to refineries that would extract the copper, zinc, lead, silver and gold.

The Ambler Mining District Industrial Access Road (AMDIAR), a proposed 211-mile transportation corridor running west from the Dalton Highway, could provide the link to markets that a project like Sun needs.

Alaska Industrial Development and Export Authority, a quasi-state-owned entity established by the Alaska Legislature in 1967, submitted applications in 2016 for rights-of-way, permits and related authorizations needed to build this road that runs west to the Upper Kobuk Mineral Projects, a large land package being developed by Trilogy Metals, in partnerships with South32 Ltd. and NANA Regional Corporation Inc.

A prefeasibility study published for Arctic earlier this year details plans for a financially robust mine that is expected to produce 1.9 billion lb of copper, 2.4 billion lb of zinc, 405 million lb of lead, 367,531 oz of gold and 40.2 million oz of silver over an initial 12-year mine life.

A US$6.7 million work program being carried out this year is collecting information needed for a feasibility study and a mine permit application for Arctic, which is expected to be submitted in 2019.

AIDEA has calculated that the mine being proposed for Arctic, the most advanced project in the Ambler Mining District, would pay back the costs of building and maintaining the road.

Other mines developed in the district – such as Bornite, which currently hosts 6.4 billion lb of copper and 77 million lb of cobalt – would further support the road while bolstering local and state economies for decades.

South32 is investing US$10.8 million this year into a drill program focused on expanding and upgrading the resource for Bornite in advance of a preliminary economic assessment expected around mid-2019.

The U.S. Bureau of Land Management is currently working on the draft environmental impact statement for the proposed industrial road into the Ambler District that crosses through the Sun property at about milepost 140.

This federal permitting work received a vote of confidence from two of the largest stakeholders in northern Alaska – the Northwest Arctic and North Slope boroughs, which are Resolved to help build the Ambler Road.

"We support resource development in our boroughs that respects the Inũpiat culture and protects our subsistence resources and the environment," Northwest Arctic Borough Assembly President Nasruk Carl Weisner said during a joint assembly held in Barrow. "We support completing the environmental impact assessment statement on the Ambler Access Road."

During the July 9 joint assembly, both boroughs signed a resolution in support of further permitting and potential co-ownership of the proposed industrial road.

This development would likely spur significant economic opportunities in the rich stretch of Northwest Alaska.

According to estimates prepared for AIDEA, the four most advanced projects in the Ambler District – Arctic, Bornite, Sun and Smucker – would provide 5,933 jobs and pay more than US$457 million in wages during their combined development phases; and 3,186 direct, indirect and induced jobs paying some US$325 million in annual wages during operations.

It is this type of job creation and economic stimulus that legislators had in mind when AIDEA was created.

"Recent developments in the Ambler Mining District have significantly enhanced the economic potential of the Sun deposit and we are excited to be part of this district's path to production," said Valhalla Metals President Freeman. 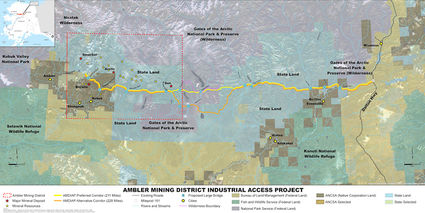 The proposed Ambler Road runs through Valhalla Metals' Sun property on its way to the Arctic and Bornite projects.

In addition to Sun, Valhalla portfolio boasts two other Alaska projects – an earlier staged VMS project on state lands at the west end of the Ambler Mining District, and Hajdukovich, a gold project in Interior Alaska.

Situated roughly 37 miles southwest of Delta Junction and about 15 miles south of the Alaska Highway, Hajdukovich is an even earlier staged gold project.

Previous exploration has turned up samples with more than 5 g/t gold in several locations across a 20-square-mile area at Hajdukovich.

Copper grades topping 3 percent have also been identified on the project in association with elevated gold and molybdenum. There has been almost no exploration of this copper-gold-molybdenum mineralization that covers several square miles of the property.

While Hajdukovich offers an intriguing target, Valhalla currently plans to focus its 2019 exploration primarily on Sun with the goal of advancing another large, high-grade VMS deposit in Alaska's famed Ambler Mining District.