StrikePoint crews are particularly interested in exploring areas recently exposed by retreating glaciers as they carry out systematic prospecting, geological mapping and sampling this year at the Porter Idaho silver property.

StrikePoint Gold Inc. has expanded its drill program and land position at its recently acquired Porter Idaho property on Mount Rainey about 2.5 kilometers (1.5 miles) outside of Stewart, British Columbia.

On Sept. 12, the Vancouver, B.C.-based exploration company announced the mobilization of a second drill rig to test the potential connection between the historic Silverado and Prosperity-Porter Idaho underground silver mines just above Stewart, British Columbia.

Despite only closing a deal to acquire the property from Skeena Resources Ltd. in late July, StrikePoint has already completed more than 13 holes testing potential extensions and connections between the two historical high-grade silver mines found there.

With this significant drilling, the addition of seven claim blocks adjacent to Porter Idaho and extensive surface exploration across this wider property, StrikePoint Gold Vice President of Exploration Andy Randell told Mining News that it feels like the company is already in the third year of exploration.

Since the initial discovery of silver mineralization on Mount Rainey in the early 1900s, most of this work was focused on the Prosperity-Porter Idaho veins, where mineralization is hosted in six dipping parallel shear zones tracked on surface for 200 meters and one kilometer down dip with widths between two and 13 meters. Roughly 27,123 metric tons of ore averaging 2,542 grams (73.8 ounces) per metric ton silver and 1 g/t gold was mined from the vein system between 1929 and 1931, producing roughly 2.2 million oz of silver. This high-grade silver ore was shipped to the port at Stewart via aerial tramway.

StrikePoint believes the ore mined from Silverado and Porter could represent opposite ends of a larger mineralized system and recent glacial retreat has exposed the ground between these past producing mine sites, providing the first opportunity to explore for a connection between the deposits.

Surface sampling carried out by Teck Resources Ltd. in the 1980s identified four main veins in the Silverado system. A sample from one of these veins contained 1,875 grams per metric ton silver. This summer's work by StrikePoint has identified possible structural extensions revealed as the Silverado Glacier has retreated.

This historical resource is found on the Prosperity-Porter Idaho of Mount Rainey and does not include the Silverado veins sampled by Teck.

As of Sept. 8, StrikePoint had completed 1,920 meters of drilling in 13 holes in the vicinity of the former Prosperity-Porter Idaho mine.

This drilling has been focused on gathering information from within the historical resource area and stepping out on the eastern flank of Mount Rainey, including tracing veins westward toward Silverado.

With a second rig added to the program, StrikePoint plans to drill several holes this year at Silverado to gather vital subsurface information and intersections with vein extensions, potentially eastward toward Prosperity-Porter Idaho.

Assay results from this drilling are pending.

While drills are turning at Porter Idaho, StrikePoint has significantly expanded its land position in the area.

In August, the company announced a deal to acquire Handsome Jack, a large land package immediately east of Porter Idaho, in exchange for C$250,000 cash and the issuance of 250,000 StrikePoint shares. This strategic acquisition allows StrikePoint to carry out expansive exploration of the area, including prospective parallel systems to Prosperity-Porter and the hypothesized connections with the Silverado Mine.

The main feature within the property is the Melvin adit, a historical mine opening last worked in the 1920s and is assumed to intersect the northerly strike extension of the Angelo Vein, which StrikePoint is testing this year with drilling on the Porter Idaho property. Ore from this historical mine returned up to 4,286 g/t (137.9 oz/t) silver during its production, but exploration work since that time has been cursory.

The Melvin and Angelo veins, both part of the resource at Prosperity-Porter Idaho are visible at surface on the Handsome Jack property, but the area between them was historically obscured by ice and so the apparent alignment has never been prospected in the field.

It was not until 1982 that the northern extension of the Angelo vein was discovered in outcrop when it was exposed from under a receding glacier.

In addition to the potential expansion of silver veins to the Melvin adit, Randell said the Handsome Jack property provides a strategic position for drilling the postulated connection between Porter Idaho and Silverado with future drill programs.

Handsome Jack also hosts earlier staged prospects further east. A two-day program in 1991 identified a 300- by 200-meter gossanous zone with anomalous silver, lead and zinc referred to as the GEE2 showing. StrikePoint said commercially available aerial imagery shows other gossanous areas of interest within the Handsome Jack property that have never been explored, largely due to the extensive ice coverage that existed up until the last decade.

StrikePoint is carrying out systematic prospecting, geological mapping and sampling at Handsome Jack. With an emphasis on areas recently uncovered by ice, this program represents the first comprehensive exploration on this property in more than thirty years.

Following its acquisition of Handsome Jack, StrikePoint further expanded its prospective land position with a deal to acquire Big, Bada and Boom – a total of six claim blocks north, east and southeast of Handsome Jack.

The additional ground also straddles what is locally known as "The Red Line," a geological contact between Triassic- and Jurassic-aged rocks which is a key marker for copper and gold mineralization. StrikePoint said most of the deposits within British Columbia's Golden Triangle are found within two kilometers (1.25 miles) of this contact zone, adding copper and gold to the high-grade silver potential on the company's property.

Crews are currently prospecting, mapping and sampling some of these further outlying gold-copper prospects to gain a better understanding of their potential and to help StrikePoint plan for its 2019 exploration on the expanded Porter Idaho property. 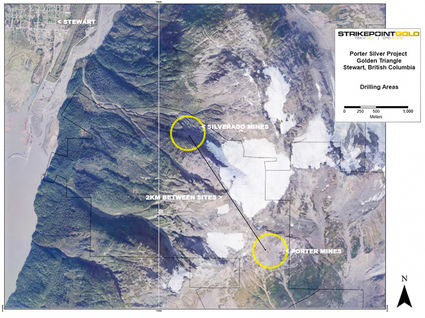