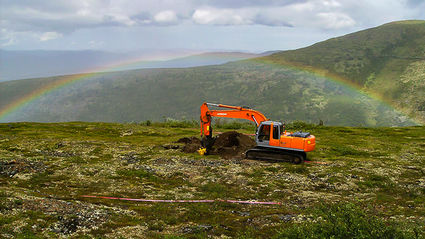 Sampling on the Connaught property about 40 miles west of Dawson City has returned assays of up to 3,150 grams (101.3 ounces) per metric ton silver and 64 percent lead.

Accessible by the Sixty Mile Road, which extends south from the Top of the World Highway, Connaught hosts more than 20 distinct silver-lead and gold veins, including veins that have returned assays of up to 3,150 grams (101.3 ounces) per metric ton silver and 64 percent lead.

"Connaught contains some of the highest grade silver-lead and gold veins in Yukon and is easily accessible from the Sixty Mile Road," said ATAC Resources President and CEO Graham Downs.

The 2017 sampling at Connaught identified the largest, and strongest, coincident silver and lead soil geochemical anomaly on the property to date, in an area with no known mineralization. This 1,500- by 600-meter anomaly comprises very strongly anomalous lead and silver-in-soil values.

The eastern part of the Connaught property is prospective for porphyry-style mineralization. The area is underlain by a stock of Late Cretaceous granodiorite with a donut-shaped magnetic low geophysical signature flanked by creeks yielding elevated copper-in-silt values. Where mapped, the granodiorite hosts magnetite veining within pervasively chlorite and epidote altered granodiorite, indicative of a high-level porphyry system. A specimen sample of the granodiorite returned 0.14 percent copper.

"Recent field work resulted in the identification of a large coincident silver-lead soil anomaly and an area of alteration and mineralization that is indicative of a high-level, copper-rich porphyry system," said Downs.

The silver-lead soil anomaly lies in the southern portion of the original Connaught land package. To cover potential extensions of the mineralization, ATAC acquired Independence Gold Corp.'s Stinger claims to the south.

Under the terms of the purchase agreement, ATAC will acquire full ownership of the Stinger claims in exchange for 60,000 ATAC shares. Independence Gold will retain a 1 percent net smelter return royalty interest in the purchased claims.

With the acquisition of the Stinger claims, the Connaught property is now 115.5 square kilometers (44.6 square miles).

"As the newly-identified soil anomaly was located on the southern boundary of the claim block, it was important to acquire the TN (Stinger) claims, which host ridge and spur geochemical anomalies indicating additional silver-lead vein potential," said Downs.

The expanded Connaught property is available for option as ATAC continues to focus its resources on its Rackla gold property in north-central Yukon.