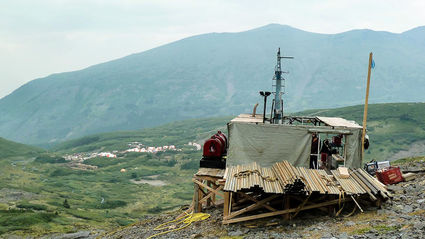 With the Saddle camp in the background, TTD089 is the easternmost hole drilled so far at the high-grade Saddle South gold discovery on GT Gold's Tatogga property.

So far this year, drilling at Saddle south has tapped high-grade gold to the east, west, south and below the mineralized envelope outlined during the company's maiden drill program carried out last year.

"We are really pleased with these latest drill results. The roughly 41 meters of almost 10 grams drilled in hole 79 ... among the most impressive intersections drilled this season in the Golden Triangle," said GT Gold President and CEO Steve Burleton. "Coupled with nearby results, this intercept pushes the mineralized envelope considerably south and to depth on the west side of Saddle South."

Before this year's drilling began, the high-grade gold discovery at Saddle South had been traced for about 700 meters along strike over a width of 150 meters. GT Gold has expanded this to about 1,000 meters in the east-west direction and approximately 350 meters north-south.

"We are extremely impressed with the work at site as our team continues to increase the size of the mineralized package at Saddle South. New high-grade intersections have been achieved in both directions along strike of the main area of Saddle South drilling to date, and at depth," said Burleton. "The discovery core area has expanded considerably in width, and we are encouraged by the fact that many of the intercepts occur over broad intervals, and that these broad intervals commonly encompass high-grade assays."

Further expansion is anticipated: strong results from newly completed talus fine sampling carried out immediately south and southwest of trend – six of eight samples taken across 240 meters returned greater than 1 g/t gold, with a high of 40.3 g/t gold – and high-grade gold sampled in undrilled areas along strike to the east, indicate that the Saddle South mineralized envelope remains open for expansion in those directions.

In addition to Saddle South, this year's drilling is testing Saddle North, a copper-gold-silver porphyry system intersected with drilling completed just before winter weather forced the end of the 2017 season. 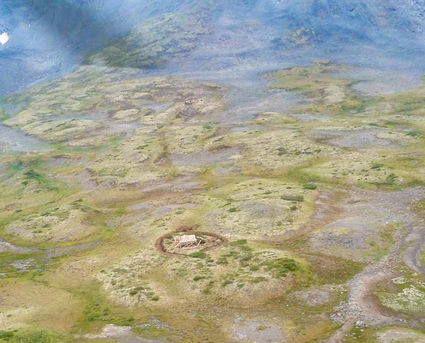 A pad is ready for drill-hole TTD090, a hole that will expand upon the porphyry copper-gold-silver mineralization encountered last year at Saddle North.

An induced polarization (IP) ground geophysical survey completed this year has confirmed that the nearer-surface geophysical signatures outlined in a shallow survey completed in 2017 extend to depths of at least 500 meters and are continuous along trend. An initial 3,000- to 5,000-meter drill program slated for Saddle North will test several targets at the porphyry discovery, including deepening TTD062.

Assays are pending from this year's drilling at this porphyry copper-gold-silver target.

"As for Saddle North, where visual indications have been encouraging, we anticipate results in the very near future," said Burleton.