Triumph Gold Corp. Sept. 12 reported that drilling has cut long sections of gold-rich porphyry-style mineralization in the Blue Sky zone on at the road accessible, Freegold Mountain project in the Yukon.

Since 2016, Triumph Gold has focused its Freegold Mountain exploration on a 6,000-meter-long soil and geophysical anomaly that encompasses the Revenue and Nucleus areas. the Blue Sky zone covers a broad area extending 2,300 meters east of Revenue to the eastern margin of the anomaly. 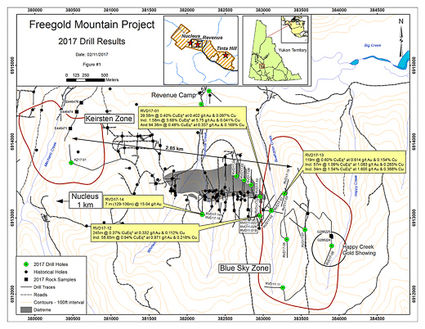 The latest batch of results add to the size and grade of the Blue Sky porphyry, which continues to be a focus of exploration at Freegold Mountain.

Work at Blue Sky includes deep penetrating induced polarization and infill magnetic geophysical surveys; infill soil surveys over Revenue East and Blue Sky; roadbuilding and trenching have exposed new outcrops in the Blue Sky zone, which are being mapped and prospected; and expert porphyry and structural geology consultants have been brought to the Freegold Mountain Property to conduct reviews of the Blue Sky porphyry.