Ucore Rare Metals Inc. Sept. 24 reported it has entered into an agreement to acquire the property to build its Strategic Metals Complex, or SMC, a rare earth element and strategic metals refinery and separation plant to be built near the Southeast Alaska port town of Ketchikan.

The SMC being planned for the six acres Ucore is acquiring north of Ketchikan will utilize IBC Advanced Technologies' molecular recognition technology, commonly known as MRT, to separate rare earths and produce individual REE oxides used in many high-tech applications.

Using a solution derived from Ucore's Bokan Mountain project, a rare earths deposit on Prince of Wales Island, about 30 miles southwest of Ketchikan, IBC and Ucore have proven this technology works for the separation of REEs and scaled the technology up to a pilot plant known as SuperLig-One.

Scaling this technology up to a commercial operation, Ucore envisions ramping up production of the SMC over a roughly four-year span. The first phase of the facility, slated for completion in 2020 or 2021, would have the capacity to process 1,000 metric tons of rare earth concentrates per year. The second phase would increase throughput to 2,500 tpy and by 2024 the company plans to have the facility processing 5,000 tpy of REE concentrates.

"The selection of the Alaska SMC property is a key element of our project pathway", said Ucore Rare Metals COO Mike Schrider. "The current owners of the selected site have been very gracious, accommodating all of our needs to secure a suitable site for this intricate project."

Situated on the North Tongass Highway, the two adjacent lots being acquired by Ucore are zoned for heavy industrial use and provide direct access to trucking routes to the deep-water shipping and container facilities at Ketchikan.

"With highway frontage and fundamental infrastructure to support the planned accesses, services and utilities, I believe we could not have selected a more promising development location," Schrider added.

"The selected site in Ketchikan is a critical milestone for the development of final engineering and environmental permitting plans and applications," said Ucore Rare Metals Vice President of Project Development Randy MacGillivray. "It will allow us the opportunity to initiate public consultation and the necessary government interaction in order to construct a state-of-the-art metals separation facility that will contribute to the local economy while protecting the environment in a safety conscious manner."

In addition to securing a suitable location to build the SMC, Ucore said it has entered into initial project funding discussions with the Alaska Industrial Development and Export Authority (AIDEA) and other lenders.

In 2014, the Alaska Legislature authorized AIDEA to invest up to US$145 million to help finance the development of a mine at Bokan Mountain and a processing facility for the operation, with the idea of potentially building this REE separation plant near Ketchikan.

In anticipation of having the REE separation plant in operation by 2020, Ucore is in the final stages of securing rare earth by-product and primary ore feedstock for the Alaska SMC, to be transported to Ketchikan in sealed containers from non-Chinese supply sources.

Developing a non-Chinese source for rare earths became more critical following the passage of the 2019 National Defense Authorization Act, which prohibits the U.S. Department of Defense from acquiring rare earth magnets – along with certain tungsten, tantalum and molybdenum products – from China, Russia, Iran, and North Korea.

"This has been an enormous shot in the arm for the build-out of a US-based rare earth separation center and supply line," Ucore Rare Metals President and CEO Jim McKenzie said. "Securing this well-appointed property, with strategic access to feedstock, utilities and personnel, is a huge first step restoring a domestic rare earth raw material supply chain for the U.S. and its allied partners. Many thanks to AIDEA and the City and Borough of Ketchikan for their continued avid support for this important project."

More details on the rare earth magnet import restriction placed on the U.S. Department of Defense can be found in Pentagon funding bans China rare earths, published in the Aug. 17 edition of North of 60 Mining News. 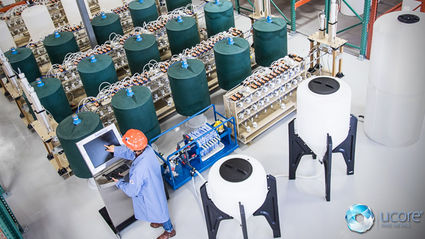 A technician operates Ucore Rare Metals' SuperLig-One pilot plant, a precursor to the Strategic Metals Complex the company is planning to build near Ketchikan, Alaska.