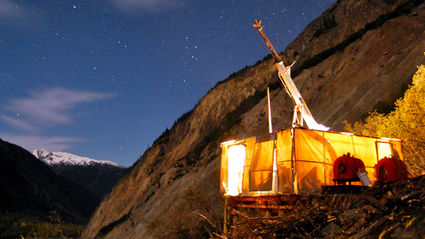 With unusual weather and unprecedented fire activity in British Columbia delaying progress at KSM, Seabridge Gold extended its exploration season to finish the roughly 27,000 meters of drilling slated for the world-class project this year.

Seabridge Gold Inc. Sept. 24 reported that following delays caused by adverse weather and an unprecedented fire season in British Columbia, the company is back on track to meet its 2018 exploration goals at the KSM gold-copper project in the Golden Triangle.

"Weather conditions were far different this year than what we have experienced at KSM over the past decade, forcing us to make program adjustments on the fly. Also, the unprecedented fire activity throughout the province and in our area limited our access to some services," said Seabridge Chairman and CEO Rudi Fronk.

The company said both labor and equipment were in short supply as these resources were dedicated to firefighting efforts.

"We are now on top of these issues and we expect to complete our planned program by extending our field season by several weeks," Fronk added.

The 2018 program includes confirmation work in the established reserve areas to ensure that the world-class KSM project is ready for final feasibility when a partner is secured; and exploration drilling to further define the higher grade core of the Iron Cap deposit.

These reserves support a 53-year mine that would average 540,000 oz gold, 156 million lb copper, 2.2 million oz silver, and 1.2 million lb molybdenum per year, according to a 2016 prefeasibility study.

This year the company completed 1,746 meters of drilling to confirm the mineral reserves in those areas where production would likely begin.

In addition to reserve confirmation, the company is completing 12 waste characterization holes along the margins of the Mitchell and Sulphurets deposits.

So far, eight of these holes have been completed. Early results indicate an updated block model of waste types along the margins of these deposits is performing well. The updated block model, however, did not capture several narrow un-mineralized intrusions encountered in this drilling. These occurrences will be included when the model is modified and are expected to reduce the volume of potentially acid-generating waste rock.

Another nine holes to collect geotechnical data were completed this year to evaluate the material properties of fractures and faults on the planned pit walls at Mitchell and Sulphurets.

Planned hydrogeological pump tests were abandoned for this season, in part due to the exceptionally dry weather.

The biggest portion of this year's roughly 27,000-meter drill program at KSM is to extend Iron Cap, a large gold- and copper-rich deposit that is gaining a prominent role in the proposed mine-plan at KSM.

In a prefeasibility study completed in 2016 Iron Cap was not slated to be mined until about 32 years into the life of a proposed operation for KSM.

At that time, however, this deposit had 224 million metric tons of probable reserves averaging 0.49 g/t gold, 0.2 percent copper and 3.6 g/t silver.

The substantially larger gold-copper resource outlined at Iron Cap since the study has prompted Seabridge to investigate the viability of mining Iron Cap much earlier in the life of a future mine at KSM. And, the company believes there is the potential to grow this resource.

Seabridge said results from the 2017 drill program confirm that the grade at Iron Cap increases as the deposit plunges to the west. This high-grade core zone is the target of roughly 16,700 meters of drilling this year.

So far, eight exploration holes have been completed at Iron Cap and the last five targeting the deeper and potentially higher grade expansion of this deposit are in progress.

While assays are still pending from the Iron Cap drilling, Seabridge said initial indications are that the deposit approaches near vertical continuity to a depth of at least 1,800 meters.

"Results thus far indicate that all of our confirmation work is consistent with our development model and the inferred resource at Iron Cap will grow substantially," said Fronk. 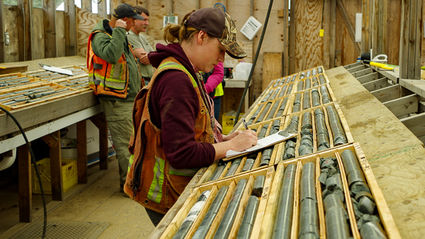