Novagold can afford patience at Donlin 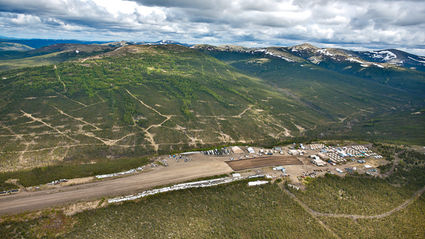 With the key federal and state permits in-hand and the balance expected by early 2019, Novagold and Barrick are focused on completing the optimization work ahead of a new feasibility study for the 39-million-ounce gold project in Alaska.

Novagold Resources Inc. Oct. 2 reported that it is well-funded to see the Donlin Gold project in Southwest Alaska to a construction decision but provided very few clues as to when to expect this decision on developing a mine at one of the world's largest gold deposits.

Novagold owns a 50 percent interest in the 39-million-ounce Donlin Gold project, Barrick Gold Corp. owns the other half.

The Donlin Gold partners now have the key federal permits needed to develop the mine and have received most of the required state permits.

In August, the U.S. Army Corps of Engineers and the Bureau of Land Management issued a joint record of decision for Donlin Gold, marking the completion of a rigorous review of the proposed mine under the federal National Environmental Policy Act process.

"In looking back at the multi-year NEPA review and federal permitting activities for the Donlin Gold project, I'm proud to say that it was a very thorough and transparent environmental review process, where stakeholders had opportunities to engage and make meaningful contributions throughout the process," Novagold Resources President Greg Lang penned in an Oct. 2 message to shareholders.

A couple of Alaska permit approvals remain outstanding, including the right-of-way for the portions of the pipeline that cross state lands.

"For the first time in the history of the Donlin Gold project, with key federal and state permits in hand, the timeline for development is completely within the project owners' control," Lang said. "We have moved Donlin Gold up the value chain and we look forward to the next chapter of further project advancements through optimization, technical enhancements and ultimately development of what we expect will become one of the best gold mining operations in the world."

"As one of the world's largest and highest-grade permitted undeveloped open-pit gold projects, Donlin Gold is well positioned to benefit from rising gold prices," said Lang. "Now, with the scoping-level optimization work largely wrapped-up, Barrick and Novagold can concentrate on integrating efforts from the optimization work into a study that should serve as a basis for an updated project development plan."

The price tag to build the mine detailed in the 2011 study was nearly US$7 billion, which includes a roughly US$1 billion pipeline to deliver natural gas to the enormous gold project.

As part of their optimization studies, Novagold and Barrick are looking into starting out with a somewhat smaller operation that focuses on higher-grade portions of the deposit and then scaling the mine up to the permitted size in stages.

The Donlin Gold partners had previously indicated that they could be in a position to provide further details on the path forward for world-class gold mine by the end of 2018.

With the sale of its 50 percent stake in the Galore Creek copper-gold project in northern British Columbia, Novagold said it has plenty of funds to see Donlin Gold to a development decision.

In July, Newmont Mining Corp. agreed to pay US$275 million to acquire Novagold's half ownership of Galore Creek. The major gold miner delivered US$100 million to Novagold in July and the balance will be milestone payments – US$75 million upon completion of a prefeasibility study or three years, whichever comes first; US$25 million upon completion of feasibility study or five years, whichever comes first; and US$75 million upon a decision to develop a mine at Galore Creek.

With the US$100 million down payment, Novagold ended its third quarter with US$166 million in its treasury.

"With an additional US$100 million we expect to receive from Newmont in the next five years, the company should not require any new funding before making a construction decision for Donlin Gold," said Lang.

Both Novagold and Barrick have indicated that they will only develop Donlin when the gold markets are right to capture the benefits of the world-class project.

"Novagold's board and management team is truly a patient and dedicated group that has been steadfast in executing on the company's strategy, while having our shareholders and project stakeholders top of mind," Lang added. 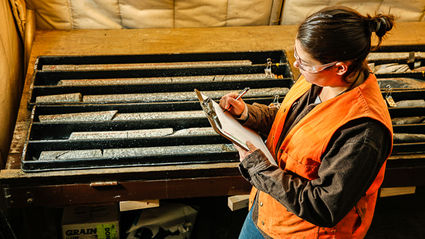 A technician logs core from the 2017 drill program from Donlin Gold. Information from this program is assisting Novagold and Barrick to analyze the option of initially developing a somewhat smaller mine than was permitted that focuses on the higher grade portions of this high-grade deposit.