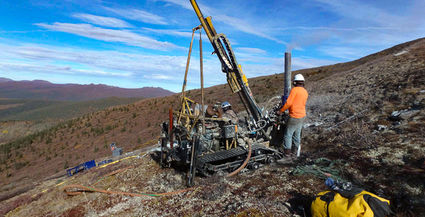 The most recent hole reported from the Vertigo discovery at JP Ross cut 3.05 meters of 56.25 grams per metric ton gold, extending the drill proven part of the zone to 235 meters.

In mid-September, White Gold Corp. announced that the discovery hole at Vertigo cut 3.05 meters of 56.25 g/t gold from a depth of 3.05 meters. This high-grade section was part of a longer 10.67-meter intercept averaging 17.34 g/t gold.

Another hole reported by the company on Oct. 2 further confirmed and expanded this high-grade gold mineralization.

"This appears to potentially be one of the most significant and interesting discoveries in the White Gold District to date – it is the kind of mineralization that could have produced the local placer gold deposits found in the area," said White Gold Corp. Chief Technical Advisor Shawn Ryan.

"The ability of our team to hit significant gold mineralization on almost every drill hole over 235 meters of strike on a new target is a true testament to the tenacity and effectiveness of our team and exploration methodology."

At least 10 individual mineralized zones – V1 to V10 – have been identified over a 350- by 1,000-meter area at Vertigo, with individual zones having been traced up to 400 meters along strike.

Rock grab sampling on the Vertigo target has defined strong mineralization over a 1,100-meter northwest-southeast.

"With each new discovery we are gaining a better understanding of the regional and local geology," said Ryan. "We now have increased confidence in the potential for further discoveries in this area as our exploration team continues to explore other targets on the JP Ross property on trend with Vertigo."

Suspicion, which is situated about 4,100 meters southeast of Vertigo, is one of the new targets the company's exploration team is investigating.

White Gold Corp. said the mineralization found at Suspicion is very similar to the Vertigo target.

The company said the larger structural trend that hosts both Vertigo and Suspicion spans more than 12 kilometers (7.5 miles). Other targets along this trend are currently being tested.

"The results ... at Vertigo are among the highest grades seen in the White Gold district and significantly expand the footprint of the mineralized system," said White Gold Vice President of Exploration Jodie Gibson. "The findings at the Suspicion show the potential for additional high-grade discoveries over the plus-12-kilometer Vertigo trend, and we look forward to the results of our follow up work in the area."

Given the high-grade gold results at Vertigo and Suspicion, White Gold Corp. further expanded its land holdings in the immediate area by staking an additional 717 mining claims totaling 14,260 hectares (35,237 acres) adjacent to its JP Ross, Hen, and Stewarts properties.

These new claims include two large blocks immediately west and south of JP Ross; west of the Henderson claims White Gold Corp. recently acquired from Independence Gold Corp. and a separate block about six kilometers (3.7 miles) to the south and adjacent to the company's Stewart claims. 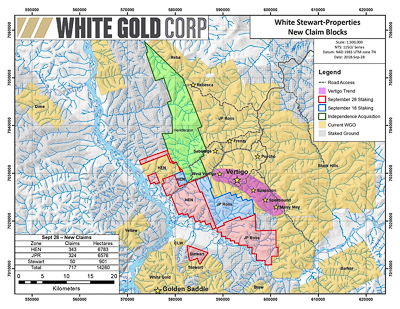 "With the recent high-grade discovery at the Vertigo target and our interpretation of the trend which appears to extend over 12 kilometers (7.5 miles), we were very keen to acquire additional claims in this area," said White Gold Corp. CEO David D'Onofrio. "We believe this is potentially a large, high-grade, structurally controlled gold system and with this staking and the recent acquisitions, we have secured the land position surrounding the discovery."

Situated about 15.5 miles (25 kilometers) north of the White Gold property, JP Ross has the advantage of being road accessible from Dawson City and the Vertigo target is within 2,000 meters of an existing road. This will provide for lower cost exploration and resource exploration drilling at this enticing discovery in the White Gold District.