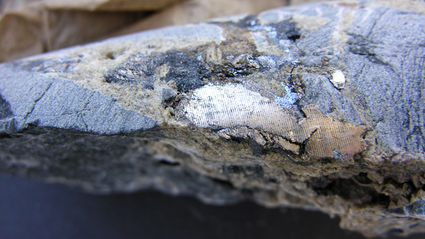 Alexco Resource's Keno Hill project in the Yukon in renowned for its high-grade silver mineralization such as is shown in this core sample from drilling.

Alexco Resource Corp. is making headway toward resumption of commercial mining operations at its Keno Hill Silver District project in the Yukon.

In May, the company reported completion of an exploration decline in its Bermingham deposit. The decline provided a platform for 5,000 meters of underground drilling of infill and exploration drilling in and around the upper portion of the very high-grade silver deposit, which contains an estimated 220,000 metric tons of potentially mineable ore with an average head grade of 1,276 grams (41 ounces) per metric ton silver, 4.2 percent lead and 2.2 percent zinc. This deposit is anticipated to provide ore for the first two years of production when operations resume at the nearby Keno Hill mine.

Most of the targeted zone at Bermingham is in the newly discovered Bear Vein, a steeply plunging area of high-grade mineralization that is roughly three meters thick and 50 meters wide. The top of this zone is about 160 meters below surface and has been traced 230 meters down-dip where it remains open to depth.

Underground drilling, along with surface exploration drilling in the Bermingham area will be incorporated into a new resource estimate to be published along with a prefeasibility study toward year's end.

Alexco, meanwhile, is making progress on permitting. After the Yukon government issued a positive decision on the environmental assessment for development and production at Bermingham, the company filed applications for water licenses needed to resume operations.

After completing the Bermingham exploration decline, Alexco relocated its underground mine development team and equipment to the Flame and Moth deposit to resume decline and ramp development, which will accommodate underground drilling as well as haulage of a planned 260 metric tons of ore per day to the primary crusher, which is located within 200 meters of the mine portal.

"We set aggressive goals for our summer mining and exploration programs and thanks to continued hard work by our team, we remain on track to achieve those goals," said Alexco Resource Chairman and CEO Clynt Nauman.