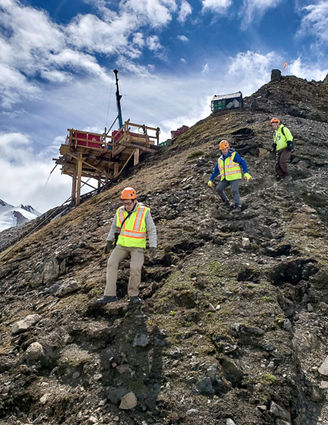 Steps cut into the mountainside make it easier to traverse the steep terrain at Constantine Metal's Palmer VMS project in Southeast Alaska.

Constantine Metal Resources Ltd. continues to advance its flagship property, the Palmer copper-zinc-silver-gold-barite project near the port-town of Haines in Southeast Alaska, as it looks to create a new vehicle to carry its gold properties in Alaska, Yukon Territory and Ontario.

The roughly US$9 million exploration program at Palmer is being funded by a joint venture between Constantine Metal Resources (51 percent) and Dowa Metals & Mining Co. Ltd. (49 percent).

Most of this resource is located within South Wall, which consists of three mineralized zones that run nearly vertically through Mount Morlan; the balance is found in RW, a fault-separated section of the same mineralization lying at the top of the mountain.

Over the three years since a resource was last calculated for the deposit, drilling has tapped new areas of copper- and zinc-rich mineralization at South Wall. The 2017 program, especially, found expansion areas that are expected to substantially increase the width and grade of mineralization along the western edge of South Wall.

A roughly 10,000-meter drill program carried out this year continued to expand South Wall, as well as test exciting exploration targets across the wider Palmer property.

A maiden resource for AG zone that includes results from the 2018 program is expected later this year.

Wanting to find out whether the substantial barite content at Palmer could be economically recovered in a saleable product, Constantine initiated a metallurgical program earlier this year.

This work showed a premium-quality barite concentrate can easily be produced.

"This may have very positive implications with the potential to both enrich gross metal value per tonne (metric ton) and provide significant environmental and operational benefits by reducing waste," said Constantine Metal President Garfield MacVeigh.

These benefits are being explored in a preliminary economic assessment being prepared for Palmer.

The Sept. 27 resource calculation will serve as the basis for the PEA.

As the Palmer JV advances the project to a point of considering the economics of developing a mine there, Constantine is putting together a new spin-out focused on gold.

A key asset for this new exploration company is Johnson Tract, a gold-rich polymetallic property in Southcentral Alaska that the company is leasing from Cook Inlet Region Inc., an Alaska Native regional corporation more commonly known as CIRI (pronounced "seer-ree").

Located about 125 miles southwest of Anchorage, Johnson Tract hosts a gold and base metals deposit that is reminiscent of the historical Eskay Creek Mine in neighboring British Columbia.

Difficult Creek is one of at least nine prospect areas spanning a 7.5-mile stretch of the property, most of which have seen little or no drilling.

Constantine believes Johnson Tract could be the flagship property of a gold portfolio for the company it spins off. The bonanza-grade Munro Croesus and large Golden Mile gold properties in Ontario, as well as a package of Carlin-style gold prospects in Yukon, are expected to round out the portfolio. 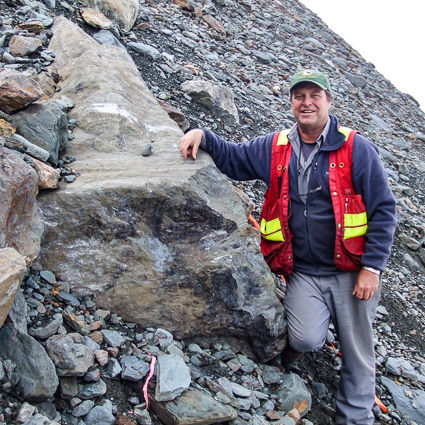