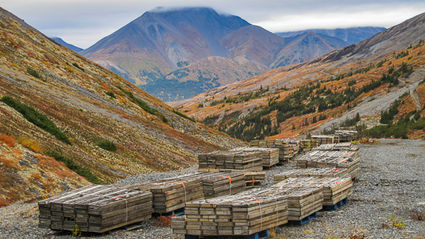 A preliminary economic assessment completed in May outlined a 4,900-metric-ton-per-day mill at MacMillan Pass that would produce 3.4 billion lb of zinc, 1.9 billion lb of lead and 37.2 million oz of silver over an 18-year mine life.

The PEA pointed to the exploration potential of expanding high-grade mineralization below and adjacent to the known deposits.

A 10,000-meter drill program that got underway in June began by expanding the high-grade zinc resources at both the Tom East and Tom West zones. This was followed by drilling at Jason South, a deep high-grade zone that was not drilled during the company's inaugural drill program in 2017. End Zone, another high-grade zinc target that was not drilled last year and is not included in the current resource, also was drill-tested this year.

The PEA also notes that the known deposits at MacMillan Pass cover a very small part of the prospective geology within Fireweed Zinc's extensive land package. In addition to drilling, the junior investigated this larger potential this year.

The company began this work with a sampling and surveying program over known areas of mineralization that helped orient and optimize exploration methodologies applied across the wider property. This work established that geophysical gravity surveying, complemented with passive seismic, soil sampling and mapping, are effective techniques to detect zinc-lead-silver mineralization in the district. By August, this gravity, geochemistry and geological work had successfully defined at least two new high-priority targets with potential for new discoveries.