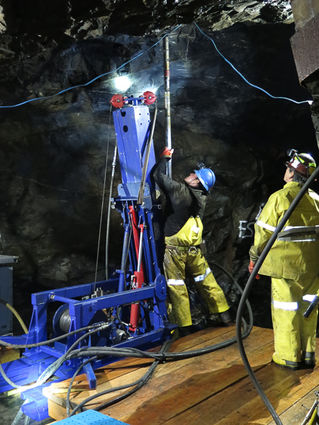 A driller pulls a core barrel during Skeena Resources' 2018 underground drill program at the historic high-grade Snip gold mine in northwestern British Columbia.

Skeena Resources Ltd. has assembled an impressive portfolio of precious and base metals properties in British Columbia's Golden Triangle. This year the company focused its exploration primarily on expanding the high-grade gold at Snip and Eskay Creek, two past-producing mines acquired from Barrick Gold Corp.

Operated by Barrick in the 1990s, the historic underground mine at Snip produced 1.1 million ounces of gold from 1.25 million metric tons of ore averaging 27.5 grams per metric ton gold.

The most prolific of the high-grade zones mined by Barrick, Twin produced 709,601 oz of gold from ore that averaged 28.95 g/t gold.

Skeena, which optioned the project from Barrick, completed 7,180 meters of surface drilling in 2016. This drilling along with other work completed that year met the requirements for Skeena to gain full ownership of the Snip property, a requisite for the explorer to drill for the high-grade gold from underground.

In 2017, the company conducted an initial phase of underground exploration that involved 8,650 meters of drilling in 62 holes.

Much of the drilling this year targeted Eastern Twin, an extension area beyond the historic Snip Mine to the east that was less densely drilled by the former operators and never developed.

In September, Peru-based Hochschild Mining Holdings entered into an option agreement to earn a 60 percent interest in Snip. As part of the deal, Hochschild bought 7.9 million Skeena shares at C90 cents per share, an 80 percent premium to what the shares were selling for at the time. Upon the closing, the Peru-based miner owned about 8.3 percent of Skeena's shares.

Late in 2017, Skeena cut a deal to buy all of Barrick's interest in Eskay Creek, another historic mine property about 40 kilometers (25 miles) east of Snip.

Discovered in 1988, the former Eskay Creek mine produced roughly 3.3 million ounces of gold and 160 million oz of silver at average grades of 45 g/t gold and 2,224 g/t silver, which at the time made it the world's highest-grade gold mine and fifth-largest silver mine by volume.

In August, Skeena Resources began an exploration and definition drill program at Eskay Creek. The goal of the program is to increase drill density in select areas of mineralization to allow for future mine planning; collect fresh material for preliminary metallurgical testing; and expand known mineralization into areas that have not been previously drill-tested.