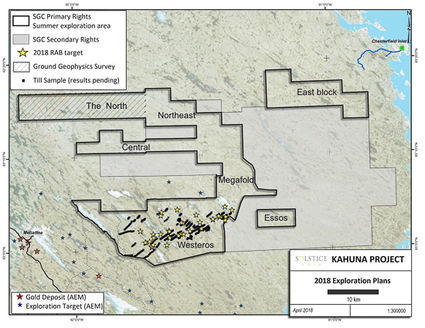 Spun out of Dunnedin Ventures Inc. in April, Solstice Gold Corp. is focused on exploring the gold potential at the Kahuna project, a large venture located about seven kilometers (4.4 miles) east of Agnico-Eagle Mines Ltd.'s Meliadine gold mine project in Nunavut.

Dunnedin has outlined 4.02 million carats of diamonds in 3.99 million metric tons of inferred resource averaging 1.01 carats per metric ton in two kimberlites at Kahuna. During its diamond exploration, however, the company also discovered gold mineralization similar to the deposits being developed at Meliadine.

To explore this gold potential, Dunnedin released full rights to 66 claims and 50 percent ownership of 12 other claims covering the Kahuna project to Solstice.

This summer Solstice intensified efforts at Kahuna to advance targeting and geological understanding on the project with a 16-person prospecting, rock sampling, and mapping program.

The bulk of the work centered on the Westeros, North and Central targets and with significant focus on remaining areas of the project.

Overall, roughly C$5 million in exploration spending was aimed to identify targets for core and reverse circulation drilling in 2019.