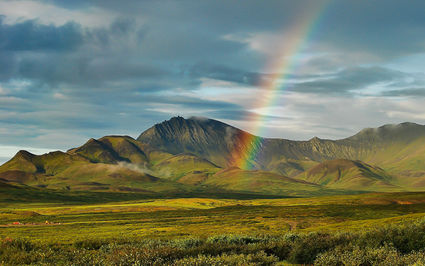 A rainbow touches down at Lik, an advanced stage zinc-lead-silver project in the Red Dog District being explored under a 50-50 partnership between Teck Resources and Solitario Zinc.

Teck Resources Ltd. is investing roughly US$110 million on mill upgrades at its Red Dog Mine that will help ensure strong zinc production from this Northwest Alaska zinc operation until at least 2031. This current life expectancy for Red Dog is based on 57.6 million metric tons of reserves averaging 13.6 percent (13.9 billion pounds) zinc and 3.9 percent (2.5 billion lb) lead.

Aktigiruq, a large and high-grade zinc target roughly five miles northwest of the current operations, could extend the life of Red Dog much deeper into the 21st Century.

While Aktigiruq had not previously been drilled sufficiently to calculate an NI 43-101-compliant resource, the 25 widely spaced holes drilled prior to 2017 suggest this exploration target has somewhere between 80 million and 150 million metric tons of material averaging around 13 percent zinc and 4 percent lead.

Teck's 2018 exploration at Aktigiruq is focused on completing the drilling needed to upgrade this target to a deposit that meets modern reporting standards.

Among the largest undeveloped zinc deposits on Earth, Aktigiruq has the potential to be a source of ore for the Red Dog mill for 25 to 50 years beyond 2031 at current production rates.

Teck's 2018 drill program is also testing other early stage zinc exploration targets across the wider Red Dog district. This includes renewed exploration at Lik, a zinc-lead-silver deposit about six miles west of Aktigiruq being advanced under a 50-50 joint venture with Solitario Zinc Corp.

Managed by Teck, the 2018 exploration at Lik included geophysics, mapping and relogging of historical core to develop new drill targets on the property. The partners are also refurbishing the camp at Lik to support future programs on the property.

In 2013, a joint venture between Teck and Korea Zinc Co. cut a deal with Canada Zinc Metals Corp. (Now ZincX Resources) to explore the Pie, Yuen and Cirque East properties. The JV earned a 51 percent interest in these properties in 2017, a stake that can be increased to 70 percent by investing an additional C$5 million before 2020.

Teck and Korea Zinc continue to advance exploration on the northern B.C. properties option from ZincX.

About 19 miles (30 kilometers) southwest of Schaft Creek, Teck has a new partner at Galore Creek, an enormous porphyry copper-gold mine project in which it owns a 50 percent stake. Newmont Mining Corp. cut a deal in July to buy the other half from Novagold Resources Inc. for US$275 million, contingent on a US$75 million final payment upon a decision to develop a mine at the northwestern B.C. project.

"We are delighted to have Newmont as a partner," stated Teck President and CEO Don Lindsay

A feasibility study completed in 2011 envisioned a mine at Galore Creek producing 6.2 billion pounds of copper over an 18-year span. It would rank as the largest copper operation in Canada.

The new Galore Creek partners plan to invest US$20 million to US$30 million annually to take a fresh look at the economics of developing a mine at this copper-rich asset.

"Our objective for Galore Creek is to complete an updated prefeasibility study over the next three to four years to improve our overall project understanding," Lindsay said.