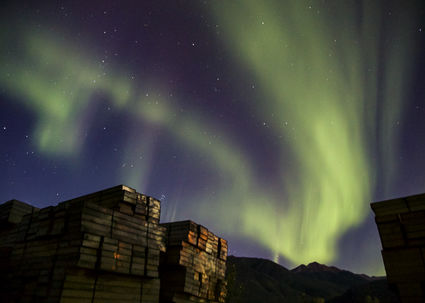 The Aurora Borealis illuminates core boxes stacked up at the Akie property, one of eleven of ZincX Resources' property blocks spanning some 40 kilometers (85 miles) of the Kechika SEDEX belt in northeastern B.C.

Canada Zinc Metals Corp. changed its name to ZincX Resources Corp. in May, part of a rebranding initiative to highlight and distinguish the explorer in the expanding junior zinc space.

The rebranded company has divided this land package into two projects – Akie, which hosts the Cardiac Creek deposit, and the Kechika regional, a series of property blocks that blanket roughly 140 kilometers (85 miles) of the Kechika SEDEX belt in northeastern B.C.

In June, the company published a preliminary economic assessment for Cardiac Creek that contemplates a 4,000-metric-ton-per-day underground mine providing ore for a 3,000-metric-ton-per-day mill that is expected to produce 3.27 billion pounds of zinc and 362 million lb of lead over an initial 18-year mine life.

The initial capital expenditures to develop this operation are estimated to run C$302.3 million, which includes C$45.7 million in contingency.

With a net present value (7 percent discount) of C$401 million, an internal rate of 27 percent and a 2.6-year payback period, all after-tax, the economics of this mine are compelling.

With the PEA in-hand, ZincX is now working with consultants to identify the most cost-effective and efficient development of Cardiac Creek, which will inform a pre-feasibility study for the zinc mine project.

Cardiac Creek remains open at depth, and the company said significant upside remains as grades seem to be improving with depth.

ZincX Resources continues to carry out baseline environmental studies as it looks to advance this zinc project through pre-feasibility, feasibility and into permitting.

The company is also investigating the district-scale potential of its expansive zinc property in northern British Columbia.