With the acquisition of Silver Coin, Ascot Resources hopes to build a substantial gold-silver resource along Missouri Ridge about five kilometers (three miles) north of the mill on the company's Premier property near Stewart, B.C.

This mineralization at Silver Coin is characterized as epithermal gold-silver deposit with base metal sulfide-bearing breccias and veins similar to the mineralization on Ascot's Premier property, which hosts the past producing Premier Mine.

"In 1991, Silver Coin ore was processed at Ascot's Premier mill and the metallurgical characteristics of the ore are well understood," said Ascot Resources President and CEO Derek White.

Ascot is working toward resuming production at this historic gold-silver mine near Stewart, B.C.

This work has focused on building upon the higher-grade resources.

This focus on high-grade is reflected in a May resource calculation for Premier-Northern Lights, which is located at and adjacent to the historical mine areas in the southern part of the Premier property.

Silver Coin, which is located about 800 meters to the south, is expected to add to the high-grade resources in this area.

"Ascot's existing resources, together with the expected Silver Coin resources, will form the initial resource base for our ongoing engineering studies," said White. 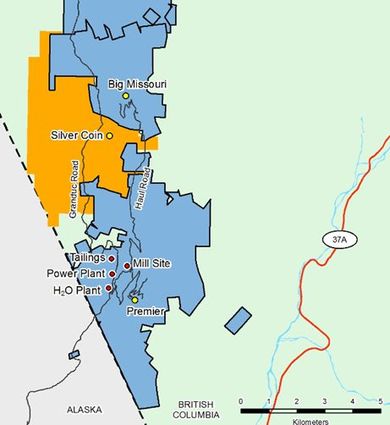 To gain ownership of Silver Coin, Ascot acquired all issued and outstanding shares of Jayden's subsidiary, Jayden Resources (Canada) Inc., in exchange for 14.99 million Ascot common shares. In addition, Ascot issued 192,000 additional Ascot shares for the settlement of options and warrants exercised before the closing date with the net cash proceeds of the warrants accruing to Ascot.

Concurrent with closing the deal with Jayden, Ascot acquired Mountain Boy's interest in Silver Coin in exchange for 3.75 million Ascot shares. In addition, Ascot issued 48,000 additional shares to Mountain Boy for the settlement of Jayden options and warrants exercised before closing.