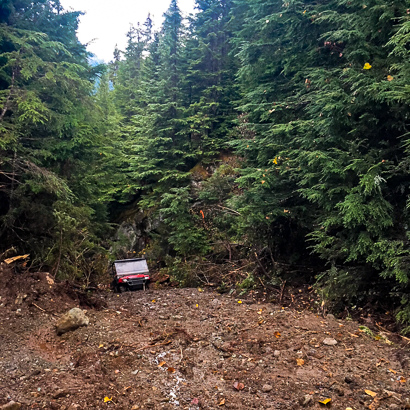 Decade Resources collected silt samples along creeks crossing the Granduc road during a reconnaissance program carried out at its Crest project this fall. This sampling returned up to 0.2 g/t gold, indicating the presence of gold-bearing structures on the newly acquired claims.

Decade Resources Ltd. Nov. 6 announced it has staked 19 claims covering the Crest high-grade gold prospect near the town of Hyder in Southeast Alaska. Situated just across the border from British Columbia's Golden Triangle region, these claims are adjacent to Ascot Resources' Premier gold-silver mine property on the Canadian side of the border.

According to A. F. Buddington, author of the bulletin, a northwest trending quartz-sulfide vein is present on the property.

The figures in Buddington's report were calculated the US$20 per ounce gold price of the time. These bonanza grade values, however, have not been confirmed with modern exploration.

Decade, however, has collected silt samples along creeks crossing the Granduc road since it staked the claims. This sampling yielded up to 0.2 g/t gold, indicating the presence of gold-bearing structures on the newly acquired claims.

"The high-grade nature of the veining on the new claims is attractive given that a milling facility may be present seven kilometers (4.3 miles) away by an all-weather road," said Decade Resources President Ed Kruchkowski. "An announcement that the nearby Premier mill may be put back into production in the near future makes this latest acquisition an attractive exploration property given the high-grade gold nature of the veins."