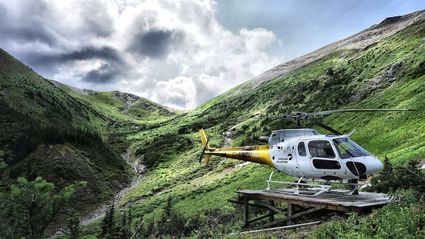 A helicopter rests on a pad in Bear Valley about 3,000 meters northwest of the Cardiac Creek deposit. This valley hosts the North Lead, a target on the Akie property where ZincX is vectoring toward higher grade zinc mineralization.

Akie – one in a series of property blocks owned by ZincX that blanket roughly 140 kilometers (85 miles) of the Kechika SEDEX belt in northeastern B.C. – hosts the Cardiac Creek deposit.

In June, the company published a preliminary economic assessment for Cardiac Creek that contemplates a 4,000-metric-ton-per-day underground mine providing ore for a 3,000-metric-ton-per-day mill that is expected to produce 3.27 billion pounds of zinc and 362 million lb of lead over an initial 18-year mine life.

While working toward a pre-feasibility study, ZincX carried out a five-hole drill program to tests some interesting targets outside the resource area.

In late September, ZincX reported the results from two holes drilled at Sitka, a massive barite showing about 4,000 meters east of Cardiac Creek.

The company also completed one hole at Sitka Extension, a target about 400 meters southeast of Sitka.

ZincX said the results suggest a strong correlation with a prominent silver soil anomaly overlying the area. The drilling did not fully define the extent of the silver enrichment within the host shale and additional drilling is required to refine the model for future drilling in the area. The silver appears to be associated with the bands of barite and thin pyrite lenses that are present within the shale however more analysis is required to better understand this anomaly.

"We continue to be excited by the promising results from the Sitka Zone target area," said ZincX Resources President and CEO Peeyush Varshney. "The presence of this new style of mineralization on an underexplored area of the eastern Akie property is very encouraging."

This year's drilling also included one hole drilled into Southeast Target, which lies about 200 meters beyond the Cardiac Creek resource.

This hole, DDH A-18-147, cut a 168-meter interval of repetitive beds of laminated pyrite and nodular barite interbedded with shale that is interpreted to be proximal to the primary zinc mineralization sought.

The best zinc grades encountered in this zone are associated with a laminated, bedded barite zone at the contact between the Gunsteel Formation and the Kwadacha Limestone. A 7.04-meter interval encountered at 507.94 meters averaged 0.31 percent zinc.

A tentative interpretation suggests there is a transitional structural change between the Cardiac Creek deposit to the northwest and DDH A-18-147; and the large zone encountered is representative of an upper folded lens of mineralization.

ZincX said drilling at depth is required to adequately test this target area.

Drilling also tested North Lead, a target about 3,000 meters along strike to the northwest of the Cardiac Creek resource.

This hole, DDH A-18-148, returned anomalous zinc values ranging from 0.1 to 0.43 percent zinc in numerous intervals over a combined thickness of 125 meters, from a downhole depth of 300 to 483 meters. ZincX said this distal mineralization is further encouragement that the limited drilling to-date at North Lead continues to vector towards higher-grade zinc values.

"The North Lead results are similar to what we have seen from this zone and we are encouraged by thick sequences of distal mineralization that conform to our geological model for the Cardiac Creek deposit," said Varshney. "We anticipate additional drilling to the northwest will direct us to higher-grade zinc intersections."

"The Southeast zone drilling confirms the extensive Cardiac Creek mineral horizon is present and has now been mapped by drill intercept over a strike extent of greater than seven kilometers (4.3 miles). This gives encouragement that the Cardiac Creek-style high-grade zinc mineralization that we know from the deposit remains to be discovered along strike. We look forward to analyzing this year's results and incorporating them into our exploration plans for 2019," the ZincX Resource CEO added.

Tongling Nonferrous Metals Group Holdings Co. Ltd., one of the largest copper smelting companies in China, is also taking a keener interest in Cardiac Creek and the larger land package held by ZincX.

On Nov. 19 ZincX announced that Tongling Vice President Hu Xinfu, a professional geological engineer with over 25 years of experience in the mining sector, has joined its board of directors. 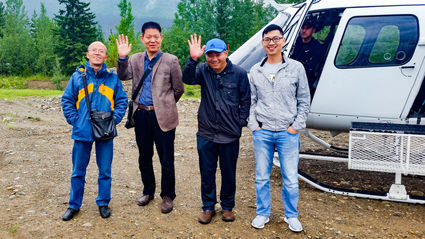 "We welcome Mr. Hu Xinfu to our Board and greatly value his wealth of exploration and production experience across multiple facets in the base metal mining sector," said Varshney. "This new appointment is in keeping with our continuing efforts to advance the significant value and merit of the Cardiac Creek deposit and to recognize the interest of one of the world's premier base metal companies."

Hu Xinfu is in charge of Tongling's acquisition and exploitation of mineral resources both in China and abroad.

"Mr. Hu Xinfu and his technical team are thoroughly familiar with the progress to-date on the Akie property, including the recent PEA. He and his technical team toured the Akie property during the 2018 drill program and recognize the inherent value of the company's significant prospective land package and the potential long-term district development opportunity," said Varshney. "We look forward to continuing to build our relationship with Mr. Hu Xinfu and Tongling."