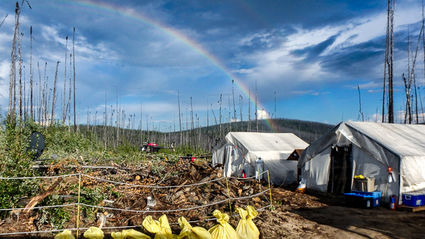 A rainbow arcs over the exploration camp at Lucky Strike, where an inaugural drill program completed in 2017 cut 22 meters averaging 5.36 g/t gold.

Goldstrike Resources Ltd. might be feeling lucky, but that doesn't mean the Canadian gold explorer is easing up in its aggressive push into Yukon Territory. Instead of kicking back and reveling in the C$53 million payday from Newmont Mining Corp., its new partner in exploring the highly prospective Plateau gold property in central Yukon, Goldstrike's management team immediately began positioning the organization to deliver what could become the next big gold discovery in the territory's red-hot White Gold District.

In August, Goldstrike completed a spin-out of the 100 percent-owned Lucky Strike project into a new junior, Luckystrike Resources Ltd., which is trading on the TSX Venture Exchange under the symbol: LUKY. Goldstrike also purchased 100 percent of the spinoff's shares in a financing that funded the new junior with roughly C$8.3 million.

Though the fledgling Luckystrike holds five other properties in the White Gold District – Hotspot, Bull's Eye, BRC, Gold Source and King's Ransom – management is focusing exploration in 2018 on the namesake property.

Goldstrike's team of geologists returned to the White Gold District in June to follow up on a 2017 gold discovery at Lucky Strike, a 156-square-kilometer (60 square miles) package of mining claims that in early exploration showed startling geological similarities to Goldcorp's Coffee Gold project, which hosts a gold resource of 3 million ounces and growing.

The Lucky Strike property is also contiguous to the White Gold property that hosts the 1.2 million oz Golden Saddle deposit, the original discovery in 2009 that ignited a modern gold rush to the mining district where more than 7 million oz of gold has been discovered since 2007.

Goldstrike geologists say the results are considered significant when compared to the Golden Saddle discovery hole of 4.1 g/t gold over 18 meters and the Coffee discovery drill hole of 17.07 g/t gold over 15.5 meters. They note that Lucky Strike's geological setting also compares very favorably with those properties in terms of grade, geology, geochemistry, structure, size, orientation and location.

Soil sampling and trenching, an effective tool in locating mineralized areas in unglaciated terrain like the White Gold District, also returned results in the Monte Carlo Zone similar to those seen in the initial discovery trenches at both Coffee Creek, which lies 30 kilometers (18 miles) to the southeast and Golden Saddle, which is 15 miles (nine miles) to the west: The Golden Saddle discovery trench returned a gold grade of 1 g/t gold over 40 meters, while one of the original discovery trenches at Coffee Creek (Trench 4) revealed a long interval of gold mineralization in the Supremo Zone of 0.4 g/t gold over 100 meters.

"The results to date demonstrate that the project is one of the most important new gold discoveries in the White Gold Camp in 2017 and has all the makings for a flagship standalone project," Goldstrike President and CEO Terry King said in January.

The 2018 exploration program at Lucky Strike is focusing on expanding the Monte Carlo zone which has a gold-in-soil anomaly that measures 1.45 kilometers by 450 meters and remains open.

Gold mineralization is exposed at surface in the Monte Carlo zone in a series of silicified and heavily oxidized zones that have subtle linear topographic expressions and a strong geochemical association with silver, bismuth, tellurium, mercury, antimony, molybdenum and copper.

Goldstrike aimed to both define the orientation of the mineralization and determine the extent of the strike length of the zone with initial drilling over about 700 meters along strike and about 300 meters across strike.

The plan also included a nine-kilometer- (five miles) long induced polarization survey on the Monte Carlo zone, expanding upon an IP survey completed last year that identified key mineralized structures that remain open. The objective of the 2018 IP survey is to extend the 2017 survey to the north where the anomaly remains open.

Goldstrike also planned to conduct more than 1,000 meters of additional mechanical trenching this year in untested areas of soil geochemistry on all five zones at Lucky Strike and systematic prospecting and soil sampling in unexplored areas of the property, including a large area southeast of the Maverick zone that is considered to have strong gold potential. More than 500 samples had been taken by mid-June of the 1,500 planned for this year.

Besides its prospectivity for gold, the Lucky Strike property offers Goldstrike-Luckystrike organization other reasons for optimism, including advanced exploration permits already in place from the Yukon government for five years.

The property also enjoys good existing infrastructure, such as access by road (the Coffee Creek Mine access road crosses the Lucky Strike property in two places), two barge landings for river access and a permitted airstrip, plus another large maintained airstrip nearby.

Digging in at Hot Spot

While of the explorer's work in the White Gold district will focus on the Lucky Strike property, the 2018 exploration program also included inaugural trenching and ground geophysics programs at the Hotspot property some 80 kilometers (50 miles) west of Lucky Strike.

Luckystrike geologists aim to delineate drill targets on the Sure Bet zone, a 100-meter by 150-meter geochemical anomaly that yielded soil samples assaying up to 4.1 g/t gold and rock samples from hand pits assaying up to 0.39 g/t gold in late 2017. The zone remains open to the north and south. Additional reconnaissance prospecting and soil sampling are also planned for the rest of the property.

Outside of the Sure Bet Zone, exploration will focus on the catchment area of a creek which yielded a regional stream sediment sample containing 123 parts per billion gold (a 99th percentile sample in the Yukon regional stream sediment database). This area is believed by the Luckystrike's geological team to have excellent potential to produce another discovery.

Collectively, this gold mineralized trend is coincident with a magnetic geophysical anomaly which is believed by the explorer's geologists to represent a regional scale shear zone, providing for additional strong discovery potential on the Lucky Strike property.

"We look forward to an exciting exploration season for our White Gold properties. The excellent exploration results to date, coupled with the fact that all six properties are 100 percent-owned with no underlying royalties or property payments, make these assets a solid foundation on which to build Luckystrike Resources Ltd. as a standalone public company, while Goldstrike focuses on its joint venture with Newmont on Goldstrike's Plateau project," King said. 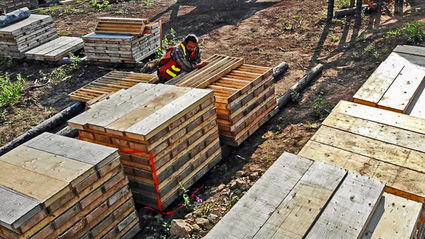 Drill core rolling in from the 2018 program at Luckystrike Resources' namesake gold property in the heart of Yukon's famed White Gold District.