Vanadium was named after the Scandinavian goddess of beauty and fertility, Vanadís (Freyja), due to the wide range of colors found in vanadium compounds. The vials above show four oxidization states of vanadium in aqueous solution.

Pine Pass project is located within a 2,508-hectare (6,197 acres) claim block 104 kilometers (64 miles) by paved highway from MacKenzie, British Columbia. With Highway 97 passing through the southern portion of the claims, access to this vanadium project is excellent. Power, gas and rail lines also pass along this corridor. Vanadium bearing horizons were identified at Pine Pass in 1976 and sampling carried out there in 1987 and 1990 found concentrations of up to 0.82 percent vanadium pentoxide within a broad vanadium bearing section with an indicated true thickness of approximately 100 meters.

The Pine Pass claims cover roughly 10 kilometers (6.2 miles) of a northwesterly trending syncline that hosts this vanadium horizon. Based on preliminary stratigraphic mapping of the syncline and very limited sampling of the horizon, the near surface exploration target at Pine Pass has been estimated in the range of 30 to 50 million metric tons of 0.5 to 0.7 percent vanadium pentoxide.

No drilling has been completed on the property and prior to Ethos Gold's 2018 program no trenching had ever been carried out.

In November, the company reported results from the first two trenches dug at Pine Pass.

The 255-meter sampled section of Trench 1, which was dug perpendicular to strike of the vanadium horizon at the East Limb target, averaged 0.27 percent vanadium pentoxide.

A partially successful effort was made to hand dig a third trench (Trench 5) in steep terrain roughly 3,000 meters southeast of Trench 2. The first 42 meters of this trench reached bedrock and returned a 20.5-meter interval averaging 0.34 percent vanadium pentoxide.

Five soil lines and two trenches were completed this year on the West Limb, a parallel vanadium horizon.

Trench 3, dug approximately 5,500 meters northwest of Highway 97, encountered a 31-meter section of 0.10 percent vanadium pentoxide. Bedrock was primarily siltstone indicating that the trench was likely outside of the main target horizon. Results from a nearby soil geochemistry line, received after Trench 3 was completed, indicate that the higher grade mineralized horizon is to the west of Trench 3.

Work in 2019 will include extending this trench to the west.

Work in 2019 will include extending this trench to the west.

The West Limb mineralization was also outlined in a road cut on Highway 97, where a 50-meter section returned an average of 0.39 percent vanadium pentoxide.

The results of the soil and prospecting together with the mapped geology of both Trench 3 and 4 suggest that the high-grade vanadium horizon at West Limb is roughly 150 to 500 meters further west than anticipated.

The 2018 regional West Limb sampling and trenching does, however, confirm that significant vanadium mineralization extends over at least 9,000 meters of the approximately 10,000 meters of prospective West Limb strike.

"The 2018 Pine Pass exploration program was highly successful in confirming plus-100-meter thicknesses of plus-0.40 percent V2O5 (vanadium pentoxide) hosted in black shale, including higher grade intervals of up to plus-0.80 percent V2O5," said Craig Roberts, interim president and CEO, Ethos Gold. "The program has also confirmed the presence of significant vanadium mineralization over five kilometers of strike on the east limb and over nine kilometers of strike on the west limb, with significant additional prospective strike length still to explore." 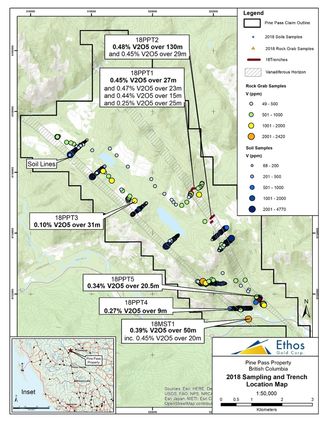 Jo Price, who was named as vice president of exploration for Ethos Gold on Dec. 4, is preparing permit applications for a 2019 trenching and drilling program that will test the 1,500 meters between Trench 1 and 2 on East Limb, as well as other target areas on the Pine Pass property.

"Based on the 2018 sampling and trenching program we are very excited by the potential for the maiden drill program to deliver significant results in 2019," said Roberts.