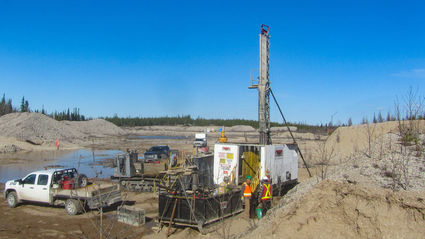 Located about 42 kilometers (26 miles) east of Hay River, Pine Point is the site of a historical mine operated by Cominco (now Teck Resources) from 1964 to 1988. During that time, Cominco mined zinc-lead ore from a series of 50 surface and underground deposits along a 60-kilometer (37 miles) trend. In all, Cominco discovered roughly 90 such deposits on the property.

The open-pit inferred resource outlined so far by Osisko is found in 42 undeveloped pits and extension of two previously mined pits across five geographic zones – East Mill, Central, North, West and N204 zones – on the past producing Hay River property.

"This MRE (mineral resource estimate) is robust and confirms that Pine Point is one of the most significant undeveloped zinc-lead projects in the base metal sector with 5.5 billion lb of combined in-pit zinc and lead resources," said Osisko Metals President and CEO Jeff Hussey.

So far, Osisko has completed 579 infill holes totaling 40,102 meters of drilling aimed at upgrading this resource to the higher confidence indicated resource category. None of this drilling is included in the current resource estimate and the company plans to drill an additional 900 infill holes for approximately 49,000 meters in the remainder of 2018 and in 2019.

This drilling is to be incorporated into an upgraded resource estimate currently slated for completion in the second half of next year.

Once an indicated resource is established, Osisko Metals plans to begin investigating the economics of resuming mining at Pine Point.

Preliminary metallurgical work shows zinc recoveries of 83.1 percent and lead recoveries of 87.8 percent for lead. This includes the use of an ore sorter that would pre-concentrate material at the various pits prior to being hauled to a centralized processing facility.

Due to previous mining and the property's proximity to Hay River, a hub with rail transportation and other services, Pine Point has a number of advantages to becoming a source for global zinc needs. 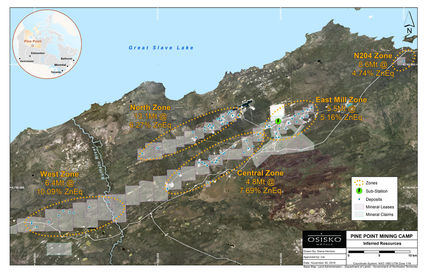 "There is a depleted pipeline of zinc resources globally and we believe Pine Point will place Osisko Metals at the forefront of junior base metal exploration and development companies," said Hussey

In addition to its location and established infrastructure, which includes an electrical substation in the middle of the property, Pine Point also hosts significant exploration potential

"The shallow mineralization is unique among zinc projects globally and Pine Point still offers excellent exploration potential both at depth and along the project's 65-kilometer (40 kilometers) strike length," the Osisko Metals CEO added.

The company plans to test this larger potential at Pine Point with a substantial exploration drill program slated mid-2019.