Sabina blazes path to Back River gold mine 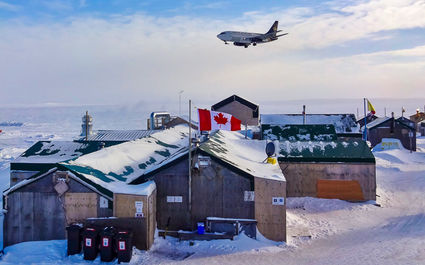 Sabina Gold & Silver Corp. Dec. 4 reported that it continues to blaze a clear path to production at its Back River gold project in Nunavut.

A 2015 feasibility study details plans for developing three deposits at Goose, one of seven properties that make up Sabina's larger Back River project. Ore from these deposits would feed a 3,000-metric-ton-per-day mill forecast to produce an average of 198,100 ounces of gold per year over an 11.8-year mine.

This year, Sabina has completed detailed engineering studies aimed at improving the overall design and carried out initial ground work that helps to de-risk this gold mine project ahead of an official go-ahead decision on development.

"2018 has seen significant de-risking work on the Back River project both in design and construction," said Sabina Gold & Silver President and CEO Bruce McLeod.

One of the changes resulting from the engineering programs is Sabina intends to enter into a fixed price contract for design and construction of the processing plant. The company said negotiation of the terms of the contract, including process and schedule guarantees, are underway.

The feasibility study contemplated a third-party contractor managing the engineering, procurement and construction of the mine at Back River. Sabina, however, plans to manage the balance of the project, a strategy that will provide the company greater certainty over costs, schedule and design quality.

"While we intend to minimize risk on the processing plant by going with a fixed price EPC (engineering, procurement and construction) contract, self-management is a key strategy to developing this project, which we successfully demonstrated with the construction of our port facility on time and on budget," McLeod added.

The completion of this key piece of infrastructure allows Sabina to transport goods to the laydown area during the summer months and then on to the Goose Mine site via a roughly 150-kilometer- (93 miles) long ice road during the winter, providing more efficiency support of exploration, development and future mine operations at Back River.

Above what was considered in the study, the size of the marine laydown and storage pads were increased by roughly 30 percent and a 3,000-foot gravel airstrip that provides access to the laydown area during the months when the ice road is not available was constructed.

The cost to complete this expanded work was roughly C$24 million, compared to approximately C$22.6 million estimated in the feasibility study, excluding contingency. In addition to the larger area and gravel airstrip, the purchase of construction equipment that was planned to be rented from contractors in the feasibility study contributed to the extra costs.

Sabina managed the scheduling, cost estimations, engineering, procurement and construction of this project.

"We believe in our approach in tackling the more challenging components of the project, such as logistics, prior to a production decision, as these activities continue to add value to the project and the company," said McLeod.

With the completion of the port facilities, Sabina received the first barges laden with large capacity fuel tanks that will provide 15 million liters (4 million gallons) storage at each the laydown area and Goose mine site, along with fuel, consumables and additional construction and ancillary equipment this fall.

In addition to de-risking Back River through the development of the key infrastructure, Sabina has been taking a hard look at the engineering and design.

This work to refine and update the development and mine plan has resulted in a roughly C$60 million increase in capital costs, some of which is the result of inflation.

It is now estimated to cost roughly C$475 million to develop the Back River mine, a 15 percent increase over the C$414.9 million calculated in the 2015 feasibility study.

Sabina, however, invested about C$55 million of this capital on the port construction; pre-development earthworks at the mine site; acquisition of a significant amount of heavy construction equipment; spares and supplies; and sealift of this equipment and materials to the port.

This leaves roughly C$420 million to finish building the mine.

"Prudent capital management is critical to the success of the project," said McLeod. "We will remain disciplined in our approach to financing by continuing to focus on activities that add value and de-risk the project."