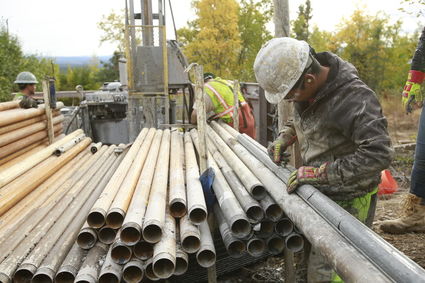 A driller during the 2017 optimization program at Donlin Gold, a 39-million-ounce gold project in Southwest Alaska owned by Novagold Resources and Barrick Gold. It has been previously estimated that this mine will provide some 3,000 high paying jobs during the construction phase, which should help bolster job growth in Alaska's mining sector.

As the year waned, Alaska's mining industry reported some of the last of its 2018 seasonal field results while the University of Alaska and state of Alaska released some current and projected state-wide economics. At the same time, some macro-economic data was released for the global mining industry. Combined, these figures show a mix of encouraging and not so encouraging trends facing the Alaska mining industry.

At the global scale, things for the mining industry are looking up. S&P Global reports that global nonferrous exploration spending was up 19 percent in 2018, to US$10.1 billion worldwide. The number of active exploration companies moved higher for the first time since 2012, increasing by 8 percent to 1,651 companies. Budgets for junior exploration companies have finally shown signs of life, increasing 35 percent in 2017. Some metals, like the "battery boys" – lithium and cobalt – did better than others with these two metals seeing exploration budgets increase a whopping 82 percent in 2018 and up more than 500 percent since 2015. Canada, Australia and the United States remain the top three destinations of choice for mineral exploration worldwide.

As encouraging as that information is, things are not so rosy here in Alaska. The University of Alaska, Anchorage's Institute of Social and Economic Research recently reported that unemployment rates continued to lag well behind the national average, tracking at 6.4 percent while the national average plunged below 3.5 percent. Of the six states whose economies are largely oil dependent, Alaska is the only state that remained in a recession following the bottom of the oil market in 2016. With oil prices recently headed south again, and Alaska production forecast to fall for the fourth straight year, it looks like "more of the same" for Alaska's economy in 2019.

While this was happening, Alaska wages have dropped for 36 straight months when compared on a year-to-year basis. Estimates for projected job growth by industry for the period 2016 to 2026 showed Alaska health care and social service jobs increasing by an estimated 10,134 jobs while the mining and oil industries, combined, were projected to see job growth of 112 jobs.

Wait, what?! So, the industries that have the most potential to bring high quality, high wage jobs to places in Alaska, where jobs are scarce, are going to add only a paltry 112 new jobs in the next eight years? Color me uber-skeptical of this figure but if this projection is true, it goes to the heart of a question recently asked by a mining company executive who is new to Alaska: "Why aren't there more mines in Alaska?" Good question.

Redstar Gold Corp. announced its half yearly operational activities summary for its Unga gold-silver project near Sand Point. The most significant accomplishment was completion on an industry compliant technical report that outlined 32 distinct prospects over the 240 square kilometer (93 square miles) project. The report also recommended more focus on prospects such as Zachary Bay and Centennial, and confirmed that the Shumagin zone, which remains open at depth and along strike, warrants additional drilling. In line with this work is a parallel effort to compile, synthesize and digest all past work conducted on the project. The company indicated it was reviewing its options for 2019, including conducting its own highly selective exploration programs and seeking partnerships to explore and develop one or more areas of the project. The company also reported that it has renewed its surface access agreement with Unga Village Corporation and have initiated the process leading to extension of its sub-surface agreement with the Aleut Corporation. This extension will renew the company's sub-surface rights on lands outside of its patented and state mining claims.

White Rock Minerals Ltd. announced additional prospect discoveries at its 117,000-acre Red Mountain volcanogenic massive sulfide project in the eastern Bonnifield District. A regional stream sampling program highlighted eight priority anomalies that warrant immediate follow-up ground reconnaissance, surface sampling and geophysics prior to drill targeting. Multiple base metal anomalies were detected over the project area, including one stream sample returning 1.1 percent zinc in an area towards the top of the prospective volcanogenic massive sulfide stratigraphy to the west of the Dry Creek deposit. No previous exploration had been done in the immediate catchment area. In addition, the area of the northern limb of the Sheep Creek synform, known as the Glacier Creek trend, displays footwall sulfide alteration that extends for over 10 kilometers along strike. The stream sediment survey has identified four discrete high priority targets within this area of alteration.

Millrock Resources Inc. announced that a subsidiary of Kinross Gold Corp. has provided notice that effective Dec. 8, Kinross terminated its option on the Liberty Bell gold project near Ferry. Millrock intends to seek another partner to drill test the numerous targets that have been developed over the past two years.

PolarX Ltd. announced it has arranged AU$1.26 million to fund future exploration at its Alaska Range project. These efforts include metallurgical test work programs to evaluate processing options for the Zackly copper-gold skarn mineralization. This will include an assessment of the potential to recover free‐milling native gold through a gravity circuit followed by subsequent processing to recover residual copper and other native gold-bearing minerals. The company also plans to conduct 15‐20 line‐kilometers of induced polarization ground geophysical surveys over the Zackly SE porphyry target, and secure contractors to conduct continued exploration on the Zackly skarn and the Mars and Zackly SE porphyry targets.

Grande Portage Resources Ltd. announced additional drilling results from its Herbert gold project near Juneau. Hole 18M-12, drilled from the north side of the Goat Vein, intersected a 9.9-meter-wide vein system that contained an interval of 6.37 meters (4.97 meters true width) just above the footwall that averaged 24.39 grams of gold per metric ton. Contained within this interval was a 0.8-meter sample grading 193 g/t gold. The vein consists of highly sheared and hydrothermally altered quartz diorite and disseminated arsenopyrite with local broken quartz and very fine grained galena, pyrite and sphalerite with visible gold. This intercept occurs approximately 100 meters east of the projected western boundary of the Goat structure which is a major lithologic and structural contact with a younger metasedimentary and volcanic rock unit. The Goat Vein structure is the northern-most of the major east-west striking, north dipping veins on the project. It has a length at the surface of approximately 850 meters and dips north at about 75 degrees. Hole 18M-12 also intercepted a hanging wall satellite vein about 70 meters above the main structure. This interval consists of a 4.5-meter intercept of multiple quartz veins in faulted and altered quartz diorite. The shearing is not as pervasive as the main zone 70 meters below and the quartz veining is more solid. The quartz contains disseminated arsenopyrite, galena and sphalerite along with visible gold. A weighted average of the well-mineralized portion of this vein averaged 25.56 g/t gold over 2.16 meters.

Ucore Rare Metals Inc. announced initiation of the consultation process with local government officials on the planned construction of the Alaska Strategic Metals Complex to be located near Ketchikan. The company previously executed a land purchase agreement for a 5.8-acre parcel of land near Ketchikan and is currently engaged in the site scoping and permitting due-diligence work. This commitment was made in consultation with, and under the guidance of, the Alaska Industrial Development and Export Authority (AIDEA). The company indicated that its plans to process rare earth element feedstock from non-Chinese sources and initiate domestic production of rare earth oxides. 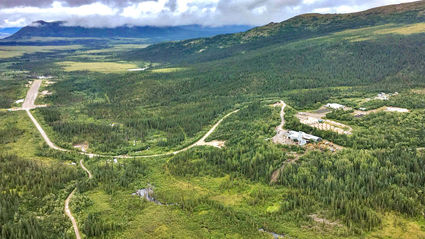