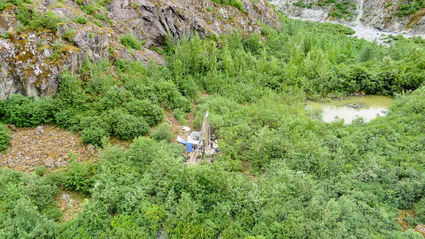 This drill pad, M18, was constructed in an area of low topographic expression and was situated on overburden consisting of talus mixed with glacial outwash and alluvium. There was no outcropping bedrock near the drill pad so the discovery of near-surface mineralization under the pad was somewhat of a surprise.

Seven holes drilled from M Pad hit shallow mineralization prior to intersecting Goat Vein to the south. The character of the mineralization is a series of fractures with pervasive alteration of the quartz diorite host rock. Alteration consists of chlorite and sericite replacement of original mafic minerals along with iron carbonate and arsenopyrite enrichment with minimal quartz. Arsenopyrite is strongly associated with gold in the Herbert vein system.

The location of Pad 18M relative to the local topography suggests this new discovery is similar to a structure discovered under Pad F in 2012. That discovery, which was also a surprise, is a northeast-trending structure occupying a topographic trench which intersects with the Deep Trench vein near its west end. 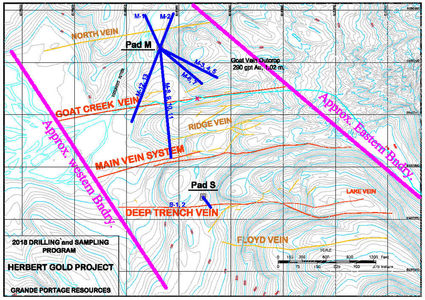 Several holes drilled from F Pad intersected shallow mineralization in this structure and holes drilled from Pad 315, just east of the structure, returned up to 1.73 meters of 23.23 g/t, including visible gold in the core. This structure under Pad F, termed the F Vein, could connect the Deep Trench with the Main Vein if it is continuous along its projection, giving it a possible strike length of nearly 200 meters. The new discovery under Pad M could be a similar structure extending between the Goat Vein and the North Vein, a distance of about 250 meters.

Grande Portage Resources said the new gold mineralization identified beneath Pad M demonstrates the potential for other new discoveries in areas covered by overburden on the Herbert property which have been subjected to more rapid erosion due to their softer and weaker nature caused by structural fracturing and shearing and subsequent hydrothermal alteration and mineralization.

The company plans to test the extent and size of the F Vein and the new Pad M discovery, including their relation to the known mineralized structures.