Is Newmont Goldcorp good for North? 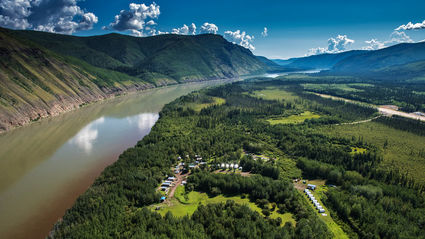 This camp on the bank of the Yukon River serves as the headquarters for Goldcorp's Coffee Gold, a near development mine project in the White Gold District that is expected to produce 184,000 ounces of gold annually.

The proposed combination of Newmont Mining Corp. and Goldcorp Inc. has raised questions about the future of the companies' gold assets in the Yukon and investments in other junior mining companies across Canada's North.

Two of the gold projects in the proposed Newmont Goldcorp pipeline are found in the Yukon – Plateau, a large property being explored by Newmont, and Coffee, a project that is nearing the mine development stage.

Knowing that the combined gold miner plans to shed some of its assets, it is currently unclear whether these projects will fit into the larger company's pipeline or be put up for sale as part of the effort to slim down.

With a focus on good assets in stable jurisdictions, coupled with Newmont maintaining its option on Plateau for 2019, there are good indicators that the soon-to-be largest gold mining company in the world will continue to foster its Yukon properties and potentially expand its presence across Canada's North.

Steady footing in the North

In recent years, Goldcorp has increased its presence across Canada's North, a foothold that is firmed by its Coffee Gold Mine project in the Yukon.

A feasibility study completed just before Goldcorp's 2016 acquisition of Coffee details an open-pit, heap-leach gold operation capable of producing 184,000 oz of gold annually over a 10-year mine life at all-in sustaining costs of US$550 per oz. This plan is based on 63.7 million metric tons of indicated resources averaging 1.45 g/t (2.97 million oz) gold and 52.4 million metric tons of inferred resources averaging 1.31 g/t (2.1 million oz) gold.

Since buying Coffee, the major gold miner has invested in expansion of the resource and exploration of other targets across the 60,000-hectare (149,000 acres) property.

Goldcorp's plans to quickly advance Coffee through permitting and into development hit a slight bump when the First Nations of Na-Cho Nyak Dun and Tr'ondëk Hwëch'in submitted letters to Yukon officials indicating they have not been adequately consulted during the environmental review process for the mine and planned access road.

Tr'ondëk Hwëch'in Chief Roberta Joseph said relationships established with this pact provides the First Nations group and gold miner "with the certainty we each need for the project to move forward."

In 2017 Goldcorp forked over roughly C$35 million to buy a 12.5 equity interest in Auryn Resources Inc., which is exploring two very large gold projects in Nunavut and Homestake Ridge, a high-grade gold-silver property in northwestern B.C. Goldcorp maintained this position by participating in a US$9.8 million financing completed by Auryn early in 2018.

The Vancouver, B.C.-based gold miner also owns a 19.99 percent stake in Triumph Gold Corp., a company exploring the Freegold Mountain gold-copper project in the Yukon. Goldcorp initially invested in Triumph Gold early in 2017 with a C$6.3 million and increased its original 19.9 percent stake slightly with the purchase 2.7 million Triumph shares in mid-2018.

In 2017, Newmont cut a C$53 million deal to earn up to a 75 percent stake in Goldstrike Resources Ltd.'s expansive and gold-rich Plateau property early.

Since cutting the deal, Newmont has invested roughly C$13 million on an exploration program focused on understanding and modeling the controls of the high-grade gold mineralization Goldstrike had previously identified at Plateau.

This work included a 2018 drill program to test the property's district-scale potential.

Goldbank, a large prospect generated with the help of Newmont's proprietary exploration technologies, was among the targets tested.

Multiple grab samples collected from Goldbank in 2017 contained high-grade gold, including one sample that returned 287.1 grams (8.39 ounces) per metric ton gold and another with 639.75 g/t (18.66 oz/t) gold. While grab samples are selective by nature, these bonanza grade samples, coupled with Newmont's interest in drilling the area, indicate the potential at Goldbank.

Beyond Goldbank, the 26 holes drilled in 2018 targeted several targets across a 70-kilometer- (43 miles) long trend at Plateau.

According to Goldstrike, the best results were encountered at Gold Dome, a target about 17 kilometers (10.5 miles) southwest of Goldstack.

In addition to drilling, the 2018 program at Plateau included the collection of 310 rock samples; 1,377 soil samples; 5,000 meters of ground geophysical surveying; and extensive property-wide mapping and prospecting.

Goldstrike Resources CFO Lucy Zhang told Mining News that Newmont paid US$1 million to Goldstrike in December. The major has until March 31 to let Goldstrike know whether it intends to continue investigating the large gold potential the Plateau property in the Yukon has to offer.

Newmont Goldcorp said it plans maintain a strong presence in Canada, another bit of good news for Yukon and the rest of Canada's North.

"The formation of Newmont Goldcorp ensures that Canada's gold industry will participate in a world-leading natural resources company that operates responsibly, is invested in the long-term success of its properties, and has the financial strength to explore and develop the next generation of significant gold mines," the companies penned in an informational circular on the deal.

Newmont Goldcorp has also committed to:

• Having Goldcorp's Vancouver office oversee all North American operations, which accounts for roughly 3 million ounces of gold production in Canada and the United States;

• Newmont Goldcorp also plans to maintain a significant Canada presence on its Board of Directors and management team;

• Honor all of Goldcorp's commitments to indigenous communities to ensure their interests are acknowledged and protected;

• Seek to list Newmont Goldcorp's shares for trading on the Toronto Stock Exchange; and

• Make new investments in a reinvigorated exploration program in Canada.

Together with the foothold the combined company already has in the Yukon, this combination of two global gold miners could be good news for mineral exploration and mining across Canada's North. 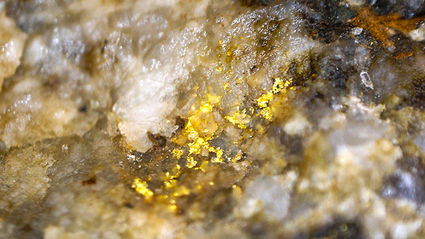 The Plateau property in the Yukon is renown for its visible gold such as seen in this roughly one-ounce-per-metric-ton sample collected from the Goldbank zone in 2017.

CORRECTION: This article was updated on Jan. 22 to correctly state the option payment Newmont Mining made to Goldstrike Resources and to clarify that Newmont has until March 31 to elect if they are going to proceed with the Plateau earn-in and investment agreement.