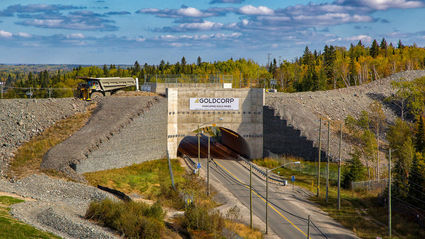 Located near Timmins, Ontario, the Porcupine Mine is one of seven gold producing operations Goldcorp will bring to Newmont Goldcorp.

Newmont Mining Corp. and Goldcorp Inc. are joining forces to create the largest gold mining company on Earth. This deal will also bring two exciting gold projects in the Yukon, Goldcorp's Coffee Gold Mine project and Newmont's Plateau exploration project, into one portfolio.

On Jan. 14 the two gold majors announced they have entered into a definitive agreement in which Newmont will acquire all outstanding Goldcorp common shares in an all-stocks deal valued at US$10 billion. Under the terms of the agreement, Newmont will acquire each Goldcorp share in exchange for 0.328 of a Newmont share, which represents a 17 percent premium based on the companies' 20-day volume weighted average share prices.

The agreement will combine two gold industry leaders into Newmont Goldcorp, the world's largest gold producer based on the more than 7 million ounces of combined gold output from the companies' currently producing mines.

The colossal gold mining company, however, plans to shed some of its current assets.

Prioritizing project development by returns and risk, Newmont Goldcorp is targeting US$1 billion to US$1.5 billion in divestitures over the next two years.

As a result, the company anticipates it will be able to steadily churn out 6 to 7 million oz of gold annually over a decades-long time horizon.

"This combination will create the world's leading gold business with the best assets, people, prospects and value-creation opportunities," said Newmont Mining CEO Gary Goldberg "We have a proven strategy and disciplined implementation plan to realize the full value of the combination, including an exceptional pool of talented mining professionals, stable and profitable gold production of six to seven million ounces over a decades-long time horizon, the sector's largest gold reserve and resource base, and a leading project and exploration pipeline."

Based on the operations currently held by the two companies, Newmont Goldcorp will have 19 gold producing mines on four continents, with roughly 55 percent of its gold reserves located in the United States, Canada and Australia.

Going forward, the merged company expects more than half of its gold production to come from North America.

"Newmont Goldcorp will be one of Canada's largest gold producers and will have its North America regional office in Vancouver, and expects to oversee more than three million ounces of the combined company's total annual gold production," said Goldcorp President and CEO David Garofalo.

"In addition to the depth and quality of Newmont Goldcorp's operations, projects, exploration properties and reserves, the combined company's assets will be centered in the world's most favorable and prospective mining jurisdictions and gold districts," he added.

The coming global gold miner said its management team will draw from the best talent Newmont and Goldcorp have to offer.

Goldberg will serve as CEO during the transitional period and anticipates handing the reigns over to Tom Palmer, who will serve as president and CEO of Newmont Goldcorp, by the end of the year.

Palmer currently serves as president and COO of Newmont Mining.

The Newmont Goldcorp Board of Directors will be proportionally comprised of directors from both companies, with Noreen Doyle from Newmont serving as chair and Ian Telfer from Goldcorp serving as deputy chair.

Newmont Goldcorp will have 19 gold producing mines on four continents, with roughly 55 percent of its gold reserves located in the United States, Canada and Australia.

Building on the depth of the combined global talent pool, leaders from Newmont and Goldcorp said the merged board will continue to focus on strategic leadership development, robust and thoughtful succession planning, and seamless leadership transitions.

Newmont Goldcorp's shares will be traded on the New York Stock Exchange using the ticker symbol NEM and expected to be listed for trading on the Toronto Stock Exchange (TSX) following closing of the transaction.

The boards of directors of both companies have unanimously approved the transaction and the merger is expected to close in the second quarter of 2019.

EDITOR'S NOTE: For early analysis of how the Newmont Goldcorp merger could affect Canada's North, see Is Newmont Goldcorp good for North, published in the Jan. 18 edition of North of 60 Mining News.