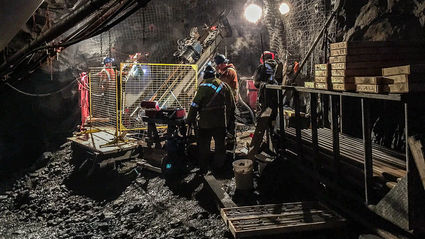 The Lacasse discovery was among the results from the final 40 underground core holes IDM received from the 2018 drill program, which targeted multiple zones for resource expansion, conversion and exploration last year at Red Mountain.

Red Mountain was originally interpreted to consist of parallel zones of mineralization. Last year, however, this model was revised to account for the identification of post mineralization folds that have deformed the mineralized zones.

The success of applying this model to the expansion of the known mineralized zones, as well as the discovery of the Lacasse and Preef zones, has validated this model and has opened up multiple areas for future drilling targeting resource expansion.

The SF zone is interpreted to be open to the east, where the zone is folded, and to the north towards a fault that offsets the mineralized horizon to Bray zone.

Most holes drilled in the AV, JW and Smit zones last year targeted the expansion of known mineralization and the conversion of inferred resources.

The most exciting results from the final 40 holes, however, are the high gold and silver grades at Lacasse zone, a discovery named after Marilyne Lacasse, the 2018 program manager at Red Mountain.

The Lacasse zone occurs in the hanging wall to the AV zone, and appears to be at an oblique angle to the orientation of the major zones at Red Mountain. It was encountered in a definition drill hole, targeting the AV zone. After cutting through Lacasse, hole U18-1361 cut a 69-meter section of the AV zone averaging 3.76 g/t gold and 21.6 g/t silver, including 18.5 meters averaging 9.07 g/t gold and 24.18 g/t silver. The AV zone intercept will expand the resource shell thickness, and further along strike to the south.

Lacasse zone was encountered in hole U18-1358, which cut four meters averaging 11.27 g/t gold and 24.03 g/t silver. IDM Mining said the 2018 intercepts likely connect with historical surface and underground intercepts in the hanging wall to the AV zone that were not understood and are currently not included in the Red Mountain resource estimate, such as a 1990 hole that cut six meters averaging 13.42 g/t gold and 34.01 g/t silver; and a 1992 hole that cut five meters of 12.99 g/t gold and 32.04 silver. 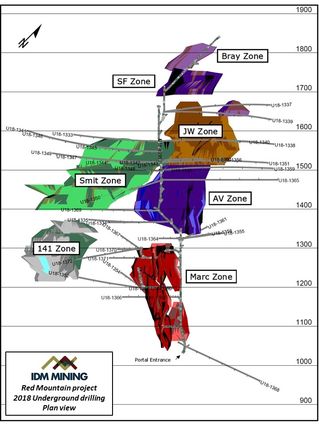 Further south, a new zone of massive pyrite mineralization, which is commonly associated with high-grade gold at Red Mountain, was discovered. One hole that encountered this newly discovered Preef zone, U18-1366, cut 7.4 meters averaging 2.49 g/t gold and 5.46 g/t silver.

Systematic drilling to develop near-surface resources within the Chicka syncline is recommended for future underground drilling programs at Red Mountain.