Willoughby expands portfolio on outskirts of BC mining town 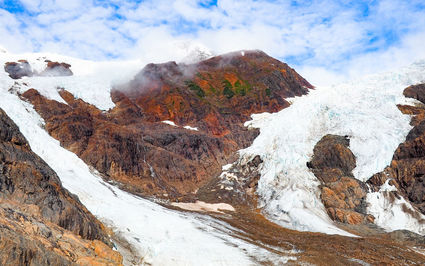 StrikePoint Gold Inc. March 20 announced it has entered into a definitive agreement to acquire Willoughby, a gold-silver project about 30 kilometers (19 miles) east of Stewart, from ArcWest Exploration Inc.

An intrusion related gold-silver project with similarities to IDM Mining Ltd.'s Red Mountain Mine project about seven kilometers (four miles) to the west, Willoughby is the second Golden Triangle property StrikePoint added to its portfolio in as many years. The other, Porter, is a past producing high-grade silver property just outside of Stewart.

"The acquisition of the Willoughby property compliments the Porter project and other ground staked in 2018 by strengthening the known mineral inventory and providing significant exploration upside all within a localized and accessible area of British Columbia," said StrikePoint Gold CEO Khunkhun.

ArcWest, which recently changed its name from Sojourn Exploration Inc., will receive C$85,000 in cash and 3 million StrikePoint shares in exchange for the Willoughby property. ArcWest will retain a 1.5 percent net smelter return royalty, which can be reduced by Strikepoint to 1 percent for an additional cash payment of C$1 million.

"The Willoughby transaction will provide ArcWest with a significant share position in Strikepoint and a royalty on the Willoughby project," said ArcWest Exploration President and CEO Tyler Ruks. "This will provide ArcWest shareholders with exposure not only to exploration upside at Willoughby, but to Strikepoint's entire project portfolio, which includes exciting high-grade precious metals properties in BC's Golden Triangle, and throughout the Yukon."

StrikePoint believes its Willoughby and Porter properties may have roles to play in the resurgence of mining around Stewart, a northwestern British Columbia town founded on rich gold and silver discoveries made in the area at the dawn of the 20th Century.

This mining renaissance is being bolstered by Red Mountain and Ascot Resource Ltd.'s Premier, two advanced gold-silver projects just outside of Stewart that are on track to become 21st Century mines.

"Acquiring Willoughby is another major milestone for StrikePoint," said Khunkhun. "New geological interpretations in the area, specifically the adjacent Red Mountain deposit, which is subject to a C$45-million-dollar takeover bid by Ascot Resources, usher in an era for new discovery throughout the Golden Triangle."

Red Mountain has received regulatory approvals for a 1,045-metric-ton-per-day mill to process high-grade ore from the Red Mountain underground mine that is expected to average roughly 78,800 ounces of gold and 228,800 oz of silver annually over an initial six-year mine-life.

Considering the resource expansion success IDM has had over the past two years, however, this feasibility study is a bit outdated.

These resources are expected to expand when the results from 10,000 meters of drilling completed last year are incorporated in an updated resource.

In the meantime, IDM Mining has entered into an agreement to merge with Ascot Resources Ltd., the company seeking to resume operations at the historic Premier Mine.

This all-shares deal, which received shareholder approval on March 20, will give Ascot two advanced gold-silver projects at the southern gateway to the Golden Triangle, Red Mountain and the Premier Mine project about 16 miles (25 miles) north of Stewart.

The Premier property has a century of gold-silver production under its belt and the basic infrastructure needed to quickly and efficiently resume production.

There is the potential that Ascot will use the mill at Premier to process ore from Red Mountain and other Stewart area projects in the future.

While the gold and silver found at the neighboring Red Mountain property does not necessarily mean Willoughby hosts an economic deposit, the wide widths of gold-silver mineralization tapped by 4,625 meters of past drilling does indicate the golden potential of StrikePoint's newest property.

Highlights from this drilling include:

While this drilling outlined a target that extends for at least 1,000 meters, only limited geophysics and prospecting have been carried out at Willoughby since the last hole was drilled in 1996.

Over the ensuing 13 years, rapid deglaciation has exposed new prospective ground for exploration, including extensions to the North and Main zones previously drilled.

Recognizing the newly revealed potential at Willoughby, Millrock Resources Inc. acquired the property in 2016. After carrying out preliminary exploration, Millrock vended the property to ArcWest.

A 2017 program funded by ArcWest and carried out by Millrock discovered important new zones of gold and silver in bedrock recently revealed by the retreat of glaciers and snowfields.

A grab sample of locally derived sulfide talus down slope from the exposure returned 6.18 g/t gold and 206 g/t silver.

The work carried out by ArcWest and Millrock have readied Willoughby for drilling and the permits needed for exploring this gold-silver property during the 2019 season are well advanced.

StrikePoint Gold said the highly prospective Willoughby property will be complementary to its Porter property, a high-grade silver project about 20 kilometers (12.5 miles) to the southwest. 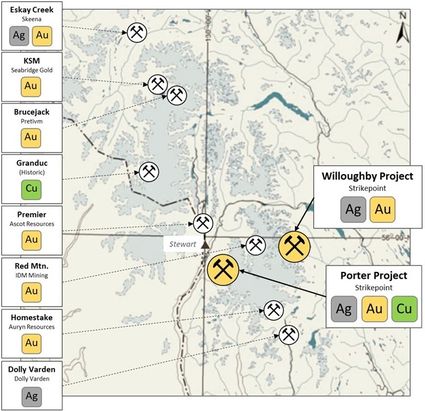 A 4,304-meters diamond drill program carried out by StrikePoint in 2018 included 22 holes focused on affirming and expanding the historical resource.

StrikePoint, which will continue exploring the high-grade silver potential at Porter in 2019, said Willoughby provides an opportunity to explore another highly prospective Stewart area property that can utilize much of the company's already established camp infrastructure, which will reduce costs.

"StrikePoint shareholders are well positioned with two high-grade precious metal properties within a direct shipping lane to Ascot's Premiere Mine. We look forward to a future of growing our resource base through exploration and acquisitions," said Khunkhun.