Fifty Miles From Tomorrow worth reading 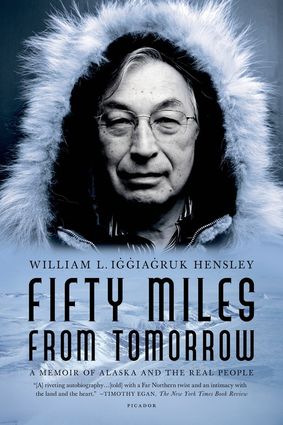 Despite over four decades of working with the mining industry in Alaska, my travels rarely brought me to the northwest part of the state and my opportunities to interface with residents have been embarrassingly few and far between. Recently, however, I have had occasion to pay a lot more attention to that part of the world. As a part of my remedial experience, I have had occasion to immerse myself in Willie Hensley's beautiful memoir about his life and the Iñupiaq of Kotzebue.

Senator Hensley's book is well worth the read and is certainly mandatory fare for anyone interested in living and working in the Alaska Northwest.

His narrative begins with a colorful, if not graphic, description of his youth, learning the ways of his antecedents, being drawn away to attend the Harrison-Chilhowee Baptist Academy in Seymour, Tennessee and then on to college, first at the University of Alaska at Fairbanks and then on to George Washington University in Washington, DC.

Hensley describes how he held numerous menial jobs through those years and, in time, became viscerally aware of the foreboding issues of unsettled Native land claims in Alaska. The injustice of western concepts of land ownership and the resultant divestiture of those who had occupied and depended on extensive land access for homes, culture and survival drove him to be proactive in requiring the United States to recognize and resolve Alaska Native Land Claims.

He, all too modestly, goes on to discuss his role in the establishment of the Alaska Federation of Natives; his stint as a member of the Alaska State Legislature, first as a representative and later as a senator; his days in the management of the NANA Regional Corporation; and his influence in opening of the Red Dog zinc mine.

These accomplishments, far more than most of us will ever journal are, however, not the essence of his book. On the contrary, with a poet's flair, he describes the values that his kinsmen have presented to all who would listen: spirituality, humor, humility, sharing, cooperation, respect for others, avoidance of conflict, respect for elders, love of children, knowledge of family, roles of family members, domestic skills, hunting success, the value of hard work, respect for nature, responsibility to the tribe and, above all, knowledge of their language.

Subtly, Hensley teaches his readers dozens of Iñuit words (and how to pronounce them), more in passing than as an explicit objective. Nonetheless, the value he places on his language and the dismay he feels at the risk of its loss comes shining through.

Senator Hensley finishes his book by describing the epiphany he experienced, when, after years of commitment and dedication to reconciling the needs of his clansmen with the demands of the unforgiving world, he realized that there was a higher plane. To use his words, "I realized that laying blame would never resolve the dilemma we faced. ...[W]e had to put that behind us and confront the issues ahead. In true Iñupiaq fashion, we had to move forward, to put to work the good spirit that is innate in our people."

There is so much more to this book than can be described in this short article. Hensley's Fifty Miles From Tomorrow is a primer for all who would understand the issues and motivations of Alaska Natives throughout the state and the feelings of displaced people throughout the world.

Senator Hensley, in one short tome has captured the pride, the culture and the attachment to land and language that has spawned cultural conflict since memory of man runneth not to the contrary. Although the book has been available on the bookshelf for a decade, it is as current today as it was when first written. It is a good read.