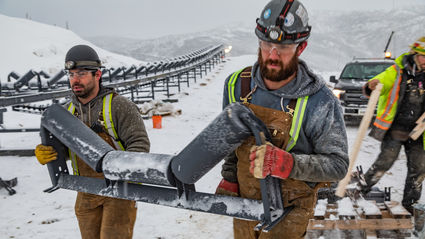 Despite winter conditions and hazards inherent to handling heavy iron and working alongside large equipment, crews building the Eagle Gold Mine in the Yukon have logged 1 million hours without a lost time incident.

Victoria Gold Corp. March 18 reported that crews constructing a mine at the company's Eagle Gold project in the Yukon has exceeded 1 million manhours without a lost time incident (LTI), an injury that results in needing to take off of work.

"I am very pleased to report the Eagle Project has passed the one million labor-hours LTI free," said Victoria Gold President and CEO John McConnell. "This is a very significant milestone, requiring a true team effort and I would like to congratulate everyone involved."

While surpassing 1 million hours without an LTI is an achievement any company should be proud of, this achievement is especially noteworthy when you consider that the large equipment and heavy iron being handled by crews newly coalesced for the mine development – not to mention that most of the 240 days without an LTI were completed during the winter, which adds to the safety challenges.

With the development of Eagle Gold now more than 80 percent complete, working safely has not affected the timeline for producing first gold at this developing gold mine.

"There is a tremendous team of people on site with over 25 contractors fully engaged to transform the Eagle Gold Project into the Eagle Gold Mine," McConnell said when updating the project in December.

Once built, this mine about 85 kilometers (53 miles) north of the community of Mayo is expected to produce 200,000 ounces of gold annually over an initial 10-year mine life.

The soon-to-be gold producer said the Eagle Mine management team is in place and key supervisors and operators are being added. Of the 106 operations personnel hired so far, 49 are Yukon residents, including several citizens from the First Nation of Nacho Nyak Dun, whose traditional territory covers the land were Eagle Gold is located.