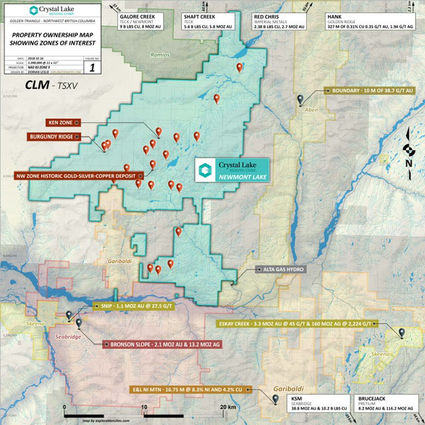 Crystal Lake Mining Corp. April 1 announce the closing of a C$4.6 million financing, which will primarily be used to fund a 2019 drill program at the Newmont Lake gold-copper-silver property in northwestern British Columbia.

In February, Crystal Lake finalized an option agreement with Romios Gold Resources Inc.to earn full ownership of Newmont Lake by completing C$8 million of exploration over three years; paying C$2 million in staged cash payments – C$1 million in four payments this year and the balance on the completion of the option; and issuing Romios a total of 12 million Crystal Lake shares over the three-year period.

While this deposit is open for expansion, Crystal Lake believes it represents only a small fraction of the property's overall potential.

So far, 22 separate mineral occurrences have been identified across the 430-square-kilometer (166 square miles) property.

Burgundy Ridge, a compelling grassroots skarn target exposed by a rapidly receding icefield about 6.5 kilometers (four miles) northwest of the Newmont Lake deposit, is one occurrence Crystal Lake is excited about.

Mapping and sampling carried out by Romios geologists last year identified a number of well mineralized boulder trains at Burgandy Ridge. Assays from choice rocks grabbed from this area returned 1.78 to 5.4 percent copper; 0.22 to 2.37 g/t gold; and seven to 54 g/t silver.

Ken Zone, a large iron carbonate vein about 3,000 meters north of the Northwest gold zone that is exposed for up to eight meters in width and at least 25 meters in length, was also sampled last fall.

Crystal Lake's ongoing reinterpretation of historical and recent data indicate the potential for a linkage between the historic Northwest gold zone and Ken-Glacier-O'Neil, the zone where the Ken vein is located.

Rapidly receding snowfields, advances in technology, and a much greater understanding of the regional geology leads the Crystal Lake team to believe that the Newmont Lake project will emerge as a "jewel" of the Golden Triangle in 2019.

"There are vast tracts of unexplored and under-explored ground within the Newmont Lake project to feed an already large pipeline of quality targets rarely seen on one property," said Peter Lightfoot, technical advisor for Crystal Lake Mining. "Our mission is to focus on the targets we interpret to have the highest immediate potential. This has me and our discovery team extremely excited for 2019."