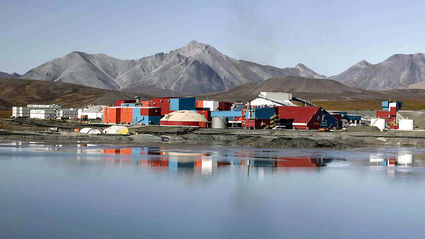 In addition to taxes and fees paid to the state, the Red Dog operation paid $355 million to NANA and $22.9 million to the Northwest Arctic Borough during 2018.

Healthy paychecks being brought home to more than 60 communities across Alaska is mining's biggest single economic contributor to the state.

Alaska's mines, development and mineral exploration projects paid roughly $459 million to some 4,500 workers. This works out to be an average wage of $102,100 per year for people working directly in the sector, nearly twice the statewide average across all industries.

When you add in the indirect jobs, or workers who provide services to the mining companies but are not directly employed by them, the number of jobs jumps to 9,200 and the payroll climbs to $715 million.

"Mining is a growing force in Alaska's economy, providing jobs for thousands of Alaskans and millions of dollars of personal income throughout Alaska," according to the report.

While jobs are the largest single economic benefit mining brings to the state, mining proceeds to Alaska Native corporations has an even wider reach, in terms of geography and populace.

Most of this money, however, does not stay in Northwest Alaska but is distributed to every corner of the state, due to the Section 7(i) and 7(j) provision of ANCSA.

This means that $221.5 million of the 2018 net proceeds from Red Dog were distributed to the other 11 ANCSA Regional corporations, half of which made its way to more than 200 villages across the state.

In total, NANA has received approximately $1.9 billion in proceeds from Red Dog since the start of mining at this world-class zinc deposit, of which about $1.2 billion in 7(i) payments has been distributed to the other ANCSA corporations.

Mining also paid $148.6 million into Alaska coffers during 2018. Here is where those funds come from:

• $28.2 million to the Alaska Industrial Development and Export Authority;

• $15.9 million to the Alaska Railroad Corporation; and

While the smallest piece of the economic pie, mining's $34.2 million in contributions to local governments is crucially important to cities and boroughs across the state. This includes:

• $14.9 million in payments in lieu of taxes by Red Dog to the Northwest Arctic Borough, plus $8 million paid to the regions' village improvement fund;

• $1.7 million in property taxes paid by Greens Creek to the City and Borough of Juneau; and

• $1.4 million in property taxes paid by Kensington to the City and Borough of Juneau.

This does not include the local sales and property taxes paid by mine employees, who make on average six-figure wages.

With two large gold and copper projects on the horizon – Donlin Gold and Pebble – and several other advanced stage mineral projects nearly ready for permitting – Arctic, Graphite Creek, Livengood and Palmer – Alaska is poised to realize even more of the high-paying jobs and other geographically diverse economic benefits mining has to offer.

"From Nome to the Ketchikan, mining opportunities in Alaska are as vast as the Last Frontier itself," the Alaska Miners Association penned in a statement on mining benefits. "Through direct and indirect jobs, state and local tax revenues, and royalties transferred to Native corporations, the mining of gold, silver, copper, zinc, lead, and coal mineral mining plays a vital role in sustaining Alaska's economy."

The full report is available on the Alaska Miners Association website at https://alaskaminers.org/wp-content/uploads/2019/04/2019-AMA-Econ-Report.pdf 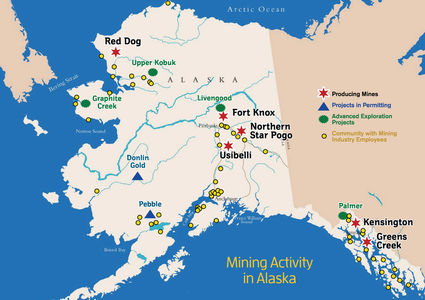